Rush Limbaugh has said it more than once, the far-left feels a compulsion to cloak reality. For an example of that regarding efforts to prompt the general public to ignore people who are skeptical about catastrophic man-caused global warming, we are blessed with a particular infographic ……..

…….. this infographic, (an update of a 2012 version which featured only a “90% consensus” in the left-side third box, basically identical to another 2012 variant) which portrays skeptics as crooks who’ve been bribed to lie by oil industry money. To spot where the cloaked reality is so easily found, let’s view the infographic as simple text.

First, the angelic enviro-activists side, mocking a particular accusation against them:

Now, evil corporate greed side of the graphic:

So, compile all of that into a rebuttal infographic, and you have something which instead asks ….

Are Both Of These Scenarios Totally Implausible? (click to enlarge) 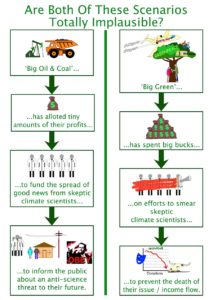 It’s a problem I can’t emphasize enough. Place essentially any claim of ‘global warming issue reality’ made by enviro-activists under hard scrutiny, and the results aren’t bulletproof information, it ends up looking like misinformation cloaking the reality of the situation.

Assertions from enviro-activists are presented as certainties to be believed, but never questioned. In this collective exercise, the assertion about bribery is a linchpin for the whole premise of angelic enviro-activists vs evil corporate greed. But it could hardly beg for a simpler question: If ‘Big Oil & Coal’ bribes skeptics to lie, where’s the evidence proving it?