It’s got no punch, otherwise. But is this bit something that instead serves as an example of pure psychological projection which additionally undermines the whole idea of skeptic climate scientists being shills on the payroll of the fossil fuel industry?

For those unfamiliar with the term as it relates particularly to the anthropogenic global warming (AGW) issue, psychological projection is where global warming believers project their own unconscious impulses or actions onto the people they are criticizing. AGW skeptics routinely stand accused of having closed minds by enviro-activists, yet enviro-activists are the ones who routinely shun counterpoint skeptic material. As a person open to reading AGW material, one of the more comical instances I found was a self-admitted acolyte of Al Gore offering readers a review of his leadership training course. When I suggested that she view a pair of opposing videos, she said she had no interest in doing so.

So, when Naomi Oreskes said the following at the 43:36 point in this 2007 video presentation as a segue into the motivations of why the tobacco industry supposedly tapped the distinguished physicist Dr Frederick Seitz for their purposes ….

It is important for us to understand that he was not a nobody. Because if he had been a nobody, then nobody would have listened to him.

….. was this instead an example of psychological projection suggesting it is enviro-activists’ narratives that are in need of ‘major somebodies’ to prevent the fatal problem of nobody listening to those narratives?

Here’s my concern over the specific accusation narrative that skeptics were on the payroll of the fossil fuel industry – as I implied in both my March 17, 2014 blog post and my post just three weeks ago, there really has only been one solitary bit of core evidence keeping this accusation alive the whole time. But from the time when the infamous leaked memo phrase “reposition global warming as theory rather than fact” came out in the media in late May 1991 until December 1995, essentially nobody of any memorable significance was trumpeting it to the public. No offense to those who first wrote about the leaked memo, New York Times and The Energy Daily reporters Matt Wald and Mary O’Driscoll, they were just faceless reporters. No offense to book authors Curtis Moore and Alan Miller, neither of them had any sort of eye-catching adjectives preceding their names which would add gravitas to the ‘news item’ they were describing.

Neither did Ross Gelbspan, for that matter. At the time of publication for his seminal December 1995 Harper’s Magazine article “The Heat is On,” he was no more than an ex-environmental reporter, retired from the Boston Globe since 1992. One would have to sift through the collection of newspaper articles he wrote to determine whether he did no more than report on situations, or if he actually did some kind of journalism involving real investigative work.

But he is commonly referred to as an investigative journalist or as a Pulitzer-winning journalist. A twist on the “Pulitzer” label was in the bio line at his Harper’s article, but was seen without the twist and with the “journalist” label on the book jacket sleeve of his 1997 book. No matter how you word it, however, he still never won a Pulitzer. Meanwhile, although the “investigative” label was not in a prominent New York Times review of his book months after it was published, you can’t miss the words “unearthed” or “muckraking” there. Assemble a timeline from his assorted narratives, and it looks more like Gelbspan’s so-called ‘discovery of corrupt scientists’ was information that was fed to him.

But, back to Oreskes’ 2007 presentation I quoted above. Take a look at the highlighted description line for it (click to enlarge image). 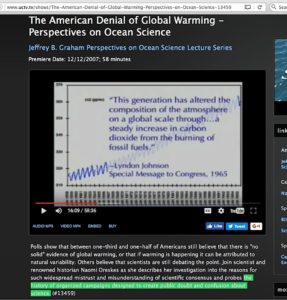 Join scientist and renowned historian Naomi Oreskes as she describes her investigation into the reasons for such widespread mistrust and misunderstanding of scientific consensus and probes the history of organized campaigns designed to create public doubt and confusion about science.

She’s not subtle about that accusation of deliberate misinformation from the skeptic side, as in her response in a 2014 radio interview about how the public has been “denied good information on climate change because there has been so much disinformation, misinformation…”

Notice how I put three periods at the end of her radio interview quote, indicating that her sentence continues. I’ve done that for long quotes in other posts, it is a standard practice among writers who don’t want to burden readers with extraneous material. Ordinarily writers don’t speak of the other material, but in this case, I will in order to make a crucial point:  she continued – as seen in the full context of the interview – with a quasi-related point about “false equivalence”, which actually turns out to be a misinformation talking point I’ve detailed here and here.

In the screencapture I have above for Oreskes’ 2007 presentation, she put three periods in the middle of President Lyndon Johnson’s sentence.

This generation has altered the composition of the atmosphere on a global scale through  . . . a steady increase in carbon dioxide from the burning of fossil fuels.

Did she do this to spare viewers from an irrelevant paragraph? The full context of President Johnson’s Conservation and Restoration of Natural Beauty speech is online, with the sentence verbatim as follows:

This generation has altered the composition of the atmosphere on a global scale through radioactive materials and a steady increase in carbon dioxide from the burning of fossil fuels.

Barely any extra space is needed to fit those three additional words on Oreskes’ slide. But they would also completely undercut her entire point of how that sentence proved President Johnson was fully aware of the perils of global warming caused by CO2. Johnson’s speech was entirely about saving the environment from out-of-control pollution; not one word was mentioned about global warming. And, where do we see enviro-activists demanding reductions in radioactive materials in order to stop to global warming?

Oreskes vilifies industry-corrupted people who employ misinformation and misdirection on the global warming issue …. and she appears to do exactly that within her own presentation. Is that not another example of psychological projection?

There’s one more gem in her 2007 presentation, at the 58:35 point, speaking about the motivations of AGW critics such as Dr Seitz and Dr S. Fred Singer:

When you have the issue declared to be over in 1992, where a Boston Globe piece suggesting Dr S Fred Singer’s position echoes that of an economic advisor to Ronald Reagan, while also offering a denouncement of giving equal time (a.k.a. “false equivalence”) to skeptic climate scientists, and concluding with no less than Vice President Al Gore declaring “The overall weight of evidence is so clear that one begins to feel angry toward those who exaggerate the uncertainty“, in the face of no evidence being presented of how the skeptics’ science-based assessments were disproved, how can the issue avoid looking like a political one from its inception? One more thing: who wrote that 1992 Boston Globe piece? Ross Gelbspan.

I submit that Oreskes has long been little more than a mouthpiece in this issue, basically just parroting what was already said in various talking points about a ‘scientific consensus’, journalists not needing to give equal time to skeptics, and that a set of Western Fuels leaked memos indicts such skeptics as paid co-conspirators with fossil fuel industry people. The difference with Oreskes is how she can’t seem to keep her mouth shut on how the Western Fuels material was located in a place which actually did not have it, that she was alerted to all the material by a person separated only one degree from Al Gore (who was using such material in 1992 to suggest a skeptic climate scientist was industry-corrupted), and that she still had the material in her possession from an announcement taking place at her 2012 workshop strategizing session on how to pursue a racketeering prosecution angle against “climate change deniers.” And in recent days, she couldn’t keep her mouth shut about this angle: “Famed Eco-Author Spoke To AG About Global Warming Skeptics Before Exxon Reports.”

The ultimate psychological projection here might be that when enviro-activists say the fossil fuel industry engaged in racketeering when it conspired with skeptics to misinform the public about the certainty of catastrophic man-caused global warming, this is instead a giant arrow pointing to enviro-activists doing all the racketeering on misinforming the public about settled global warming science and industry-corrupted skeptics. If you start out with ‘nobodys’ pushing the industry accusation and never fix that problem, you increase the risk of the public not taking it seriously, which leads to the risk of the public looking more carefully at skeptic climate scientists’ detail assessments.

In the growing backlash to this overall situation, “GOP AGs warn Dems that if climate skeptics can be prosecuted for ‘fraud,’ so can alarmists,” I’d suggest Naomi Oreskes opens a far wider window into enviro-activist racketeering that most people realize.