Questions …….. I have questions. We all should have questions regarding the “Clima-Change™” issue, because the issue itself demands unquestioned belief in its orthodoxy. So, in Tom’s 53 minute interview of me, I describe the questions that landed me in the issue, starting out with just the simplest question I had as a little kid, and then the questions I have now of why the traditional news media is not asking questions they should pose as a matter of basic investigative journalism. The elemental point I wish to drive home in this interview is that the questions end up being larger than just the science, where the ultimate implication is that if we are pressured in any way not to ask questions on any controversial issue, that’s where democracy dies in darkness.

Here, let me add a few details about the visuals that accompanied my telephone interview, along with some other info bits.

First, Tom Nelson’s prior interviews were Zoom video ones, but I could only do one via a borrowed smartphone since the computer I use is an almost obsolete one dating from 2008 which can at least accept browser upgrades, but does not have a functioning camera. I truly doubt that it can handle Zoom video conferencing even if the camera worked. I live at a sub poverty level, I don’t have the money for new high tech items. (Don’t forget that I have a Donate button at the top right of the GelbspanFiles home page, but donations won’t go toward a new computer, they would go to more pressing things such as car replacement parts, dentist appointments, or other items I’ve been doing without in the face of having a razor-thin budget. My next car insurance payment also looms soon.)

Regarding the cycle of still images seen in this interview video, a couple are are self-explanatory, all are visuals I created or photo-altered / screencaptured, a benefit from my graphic arts training. Each image from the interview below is in thumbnail form here, click on them to enlarge them, if needed.

• The “3 global warming talking points” text — ‘settled science / crooked skeptics / reporters may ignore skeptics because the science is settled and skeptics are crooks’ is the same slide I used in my 2014 panel presentation at the Heartland Institute’s 2014 climate conference. I’m jealous of how over 30 years of Al Gore’s climate issue still can be boiled down to just those three talking points. What I detail at length here at GelbspanFiles and in my 70+ other online pieces is how that central point – crooked skeptics – implodes. It’s relatively simple, there’s no viable evidence to prove that central point, but I am compelled to spell that out via bulletproof details, which cannot be done in just 3 lines.

• The Andrew Breitbart 2011 quote is also from my 2014 climate conference presentation, but dates back further to the earliest time of my main Twitter account and Facebook page. Basically the mainstream media needs to get back to their core job — if they won’t, we’ll have to do their job for them. 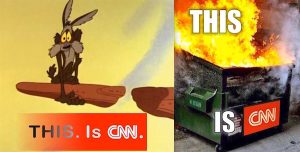 • The MSM has indeed abdicated from their responsibility to doing their traditional job – CNN’s ineptness has turned that network into a dumpster fire of journalism malfeasance. My concern that intensified from 2000 to 2009, though, was why the Public Broadcasting Service’s news program, the MacNeil / Lehrer NewsHour that I grew up with, was not doing their job on the climate issue. They still don’t.

• AmericanThinker screencapture of Dr S Fred Singer’s article and my March 2014 “Smearing Climate Skeptics” as 1 – 2 headliners that particular day. His was on the science; mine asked what kept the global warming issue alive – answer: essentially, the smear of skeptic scientists as paid industry shills. It’s what keeps the issue alive today in zombie-like fashion. 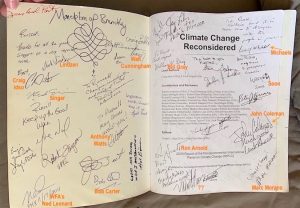 • The NIPCC Reports autographs collection – Dr Singer and Dr Craig Idso gave me that copy in 2009 and were the first two to autograph it. I’ve added 80 more. I provided Tom Nelson with this image in advance of the interview as an item he could ask about, but we didn’t get to it in this interview. 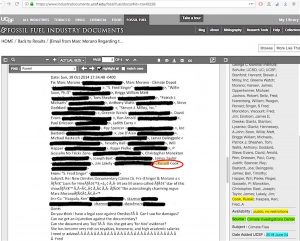 • My name in the Tobacco Industry Documents Library – ditto on that image for Tom, which we didn’t get to. However, I have covered the incident of Dr Singer including me in his 2015 email chain when he tried to see if he could sue Naomi Oreskes for slander – see: “Naomi Oreskes – the gift that keeps on giving, redux.” 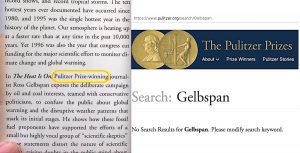 • Gelbspan is not a Pulitzer Prize winner – That fact alone is something mainstream media reporters ignore even though it is one of the biggest ‘reporter resumé enhancement crimes’ a journalist could commit. But that problem is only the proverbial tip of his ‘iceberg’ problems. 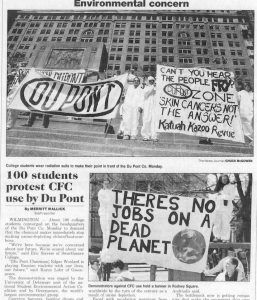 • 1992 anti-CFCs protest newspaper report – I mentioned in this interview how there was an old global cooling article about armadillos being forced to move south, but I forgot to mention that in between the fad of global cooling and global warming, there was the other big fad about how polar bears would go blind if we did not stop ozone depletion through the ban of chlorofluorocarbons (CFCs). 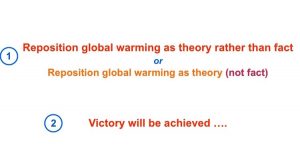 • “Reposition global warming” / “victory will be achieved” – alas, I spoke at length about the first of the two totally worthless ‘leaked memo sets’ that accusers claim is smoking gun evidence of the industry orchestrated ‘disinformation campaigns’ … but I forgot to mention how ludicrous the second memo set is. I cover that set’s fatal faults across several GelbspanFiles blog posts. 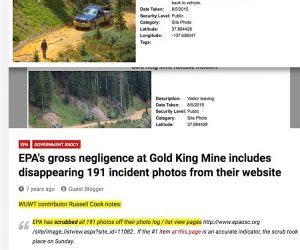 • The EPA’s disappeared Gold King Mine wastewater spill photos – I mentioned toward the end of the interview how I’ve vacationed in the same Colorado summer spot since the 1980s, and how that relates to my observation of the little pikas in that area not actually being affected by any alleged man-caused global warming, but alas, the missing EPA photos situation was another image I meant to segue to in connection to my Colorado vacations, to explain that EPA has big problems beyond its global warming pronouncements. I was potentially one of the first to spot them deleting their photos of an area I was very familiar with, but at the time was baffled about news reports that featured a “contamination dam breach” warning sign, so I tried every which way to see what “dam” the reporters were talking about. There was no such dam, EPA’s subcontractors had simply and recklessly dug out a mine entrance when they should not have.

Ask questions, and you find answers, some of which are massive faults that prominent people want to keep hidden from the public.

I’ll end here with one of my illustrations that was not part of the interview, but instead was at the end of my January 18, 2021 blog post “The Capitol Riot and Climate Disinformation” blog post on how the climate issue is far larger than the science, when it concerns government officials deciding what kind of speech is not permitted. When I and you cannot question any aspect of the orthodoxy of Clima-Change™, and if others’ questioning of it is scrubbed from public view ….. what other questioning will be treated the same way, and what will the punishment be when folks put out their questions anyway? 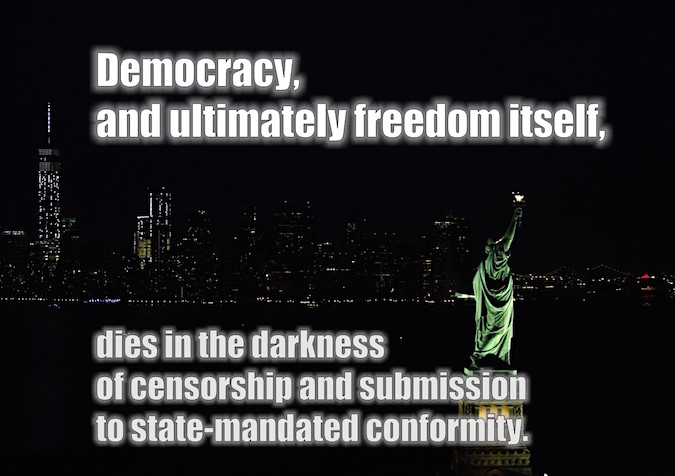