Filed under my “Can’t make this stuff up” category. First, the setup behind all of this:

I was alerted to the allegedly peer reviewed “Electric Utility Industry’s Role in Promoting Climate Denial, Doubt, And Delay” paper at the Environmental Research Letters science journal by a prominent scientist on the skeptic side of the catastrophic anthropogenic global warming (CAGW) issue. When I immediately spotted big errors in the paper and suggested it was ripe for retraction, the scientist told me the effort would be difficult if not impossible to accomplish considering the apparent bias of the ERL editor. At that point, I could have simply tossed the paper into my giant notes file as the latest example to unquestioningly regurgitate ye olde “reposition global warming” memo set as [false] ‘evidence’ of fossil fuel industry disinformation campaigns. However, I reasoned that if enough people were to see my dissection of the paper at WattsUpWithThat (the world’s most viewed site on global warming and climate change) such that some of them would afterward decide to contact ERL or the authors on their own, the pressure might then prompt voluntary removal of the paper from publication, self–censorship in other words, out of sheer embarrassment about the errors. Arguably a long shot goal to accomplish, but still worth a try, nevertheless.

In a brilliant bit of not thinking their action all the way through, the leftist DailyKos website made my goal one more increment possible of achieving. It’s one of those instances where if there are any DailyKos readers who harbor even just small amounts of doubt about the “crooked skeptics” accusation, the readers might react to that piece with, “Dude, you didn’t actually dispute the guy’s main argument that there is a fatal fault with the ‘smoking gun’ leaked memos. What’s up with that?”

So, let’s take apart DailyKos’ “Deniers Cry ‘Censorship’ Defending Paper They Like, Then Demand Censorship of Paper They Don’t” bit by bit. Toward the end of it all, there will be a “Did you see what happened there?” question.

#1 Russell Cook, a man who for years has been on a quixotic crusade to attack every example of the scholarship showing how the fossil fuel industry created and funds climate denial and disinformation.

“Russell-who?” Since whoever the undisclosed “ClimateDenierRoundup” person or group of this piece refuse to share whatever familiarity they have of my material, their readers must do a site-specific search of DailyKos to find out more, only to discover the single other reference to me is something from over 7½ years ago. The irony here about their complaint against my most recent WUWT guest post is that they don’t mention anything about my lone guest post submission to DailyKos back in 2015, “Meteorologist does ‘Psycho Analysis of A Climate Skeptic’ – something he spaced out, though” (under the user name “QuestionAGW”) that they immediately censored out of sight, which I then alternatively submitted as a guest post to WUWT, albeit with a different title, “Climate Change Free Speech Prohibited at DailyKos,” and screencaptures of its initial short life at DailyKos.

It’s minimally reassuring that somebody at DailyKos knows that I didn’t start doing what I do last week. Entertaining how they couldn’t bring themselves to link to where else I do this “quixotic crusade” (the Desmogblog website sorta did that within their worthless 2014 profile of me, albeit linking only to archive versions of my GelbspanFiles blog, seemingly so as not to lead readers to what I’m up to in the present time).

Meanwhile, getting back to business (to use DailyKos’ own words), if by ‘attack every example of the scholarship,’ they mean scholarly articles in peer reviewed science journals, this is by default illogical, since I clearly provided both the text and screencapture of the assertion that the paper in my WUWT dissection is “the first peer-reviewed publication to survey the industry’s messaging specifically.” If this is the first such paper of its kind, how could I be attacking such papers for years? Perhaps the hapless folks at DailyKos meant Masters degree / PhD degree dissertations. True, I explained in one post – one – that a number of people receiving those degrees are enslaved to ye olde “reposition global warming” memo set as cornerstones for the premise of their degree submissions. And perhaps the DailyKos folks were referring to my one post dissecting a hapless college student’s enslavement to the same memo set. I thank the DailyKos folks for remembering those two, I guess. They were fact-based analysis, not meritless attacks. And I spent maybe 3 days or so researching each one, tops, not years. But in failing to provide DailyKos readers with links to those two posts, the poor readers are left with no proof that I’ve done anything I’m accused of.

#2 What are these egregious errors? First is that supposedly the denial campaign wasn’t actually about denial, and wasn’t by a front group because one of the ads placed “to show the public that there was another side to the issue” happened to admit it was funded by coal companies and electric utilities. …

And the DailyKos folks there literally do not dispute what I asserted. I run across the false “denial” talking point frequently from CAGW believers, and when pressed to explain why a group of 600+ people at a skeptic climate conference don’t actually deny climate change from answering various direct questions about it, the CAGW believers invariably change the subject. The definition of a front group is an outfit that deceptively hides what its origins are. E.g. Kert Davies’ benignly named “Climate Files” / “Climate Investigations Center.” That Kert Davies, who apparently harbors a vendetta against the fossil fuel industry, alongside his former long-time boss who seems to be exposed as being the unnamed source of dark money funneled to Davies’ operation.

#3 Russell has quibbles with the origins of the documents, as though who and where they were kept is pertinent to what happened …

Again, the DailyKos folks there literally do not dispute what I asserted about “the documents,” namely ye olde “reposition global warming” memo set being an unsolicited, never implemented – never implemented! proposal which, by default, cannot serve as evidence that disinformation campaigns took place anywhere. It is massively pertinent that the docs were described to be in a place they were not along with detailing which people promulgate utterly inconsistent accusations about them while claiming to have personally seen them — a tell-tale indicator that the collective accusation may be a fabrication which the various promulgators can’t keep straight.

#4 … whether a group can co-found something and then not run it (of course, that’s what “found” means!) …

DailyKos again does not dispute what I asserted about the Edison Electric Institute not running the so-called disinformation campaign that the ERL paper’s authors accused it of running. Meanwhile, absolutely nowhere is there any evidence proving the Edison Electric Institute was a co-equal creator of the Information Council for the Environment public relations campaign. Had DailyKos did the deep research that the paper’s authors chose not to do, they would have found out from former Western Fuels officials that the ICE campaign was the sole creation of WFA, subsequently aided by member groups in the association, and that Western Fuels’ own 1991 annual report basically declared this effort, as I showed way back in 2013.

#5 … whether the totally-not-denial campaigns really “collapsed” or were just “terminated”, a difference without distinction …

As can be seen within the newspaper ads themselves here and here, there is no outright denial of a changing climate. Regarding those words, there’s a distinct difference. “Collapsed” in this context implies caved-in from outside pressure, embarrassing news media revelations. “Terminated” can mean it was stopped internally for any variety of reasons. I was told by WFA people that it had reached the end of its planned pilot project lifespan. Period.

First, see point #2 above. Then, credit DailyKos for actually affirming one of my WUWT assertions. Funny thing about that – in noting that DailyKos had spoken of the ERL paper’s publication days before trying to tear me down, they have yet to amend their piece about the quote which that they now fully admit is an error. 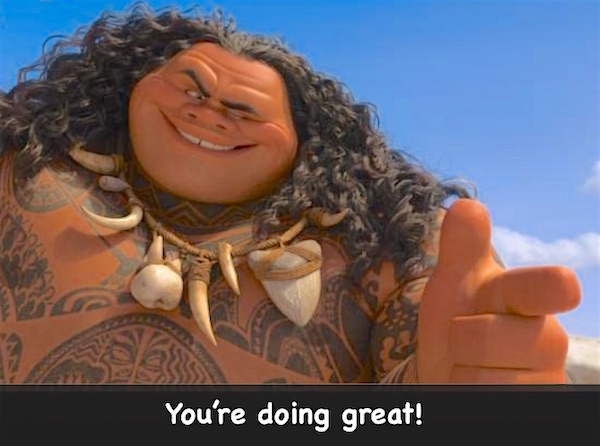 So, what can I say except you’re welcome?

#7 None of this changes any of the findings …

No, it kills the findings. No matter what action is proposed to any entity, the mere existence of the proposal is not proof that the recommended action ever took place. Especially if the proposal was rejected.

So, after all of that, did you see what happened there? They say the paper is still afloat, but never refuted the very errors that sink it.

They didn’t even directly mention the biggest fatal fault of all, the literally worthless “reposition global warming” memos. But as I prominently showed in my April 25, 2020 blog post, DailyKos sure did in their 2019 promo piece for Kert Davies’ Climate Investigations Center, complete with the same “on” error that Davies makes at his CIC website and at his Climate Files website — the same guy who one of the ERL paper’s authors openly confesses is essentially the single source for the paper’s supposedly “smoking gun” documents.

From that point onward, DailyKos can only bail water.

#8 … it does establish that WUWT is not opposed to criticizing a peer-reviewed paper’s findings and discussing retraction if there are errors identified after publication.

Yeh, …. so? That’s a truism, no different than saying DailyKos is not opposed to criticizing a peer-reviewed paper’s critics and discussing whether the critic is hypocritical. There’s literally nothing damaging about it.

That’s where DailyKos sinks its itself, via the way they opened with “Deniers Cry ‘Censorship’ … Then Demand Censorship.”

Like I said both within my WUWT guest post and in a same-day subsequent comment there, I don’t call for censorship, I advocated for the authors to somehow become aware of their paper-killing errors and then decide to self-censor. 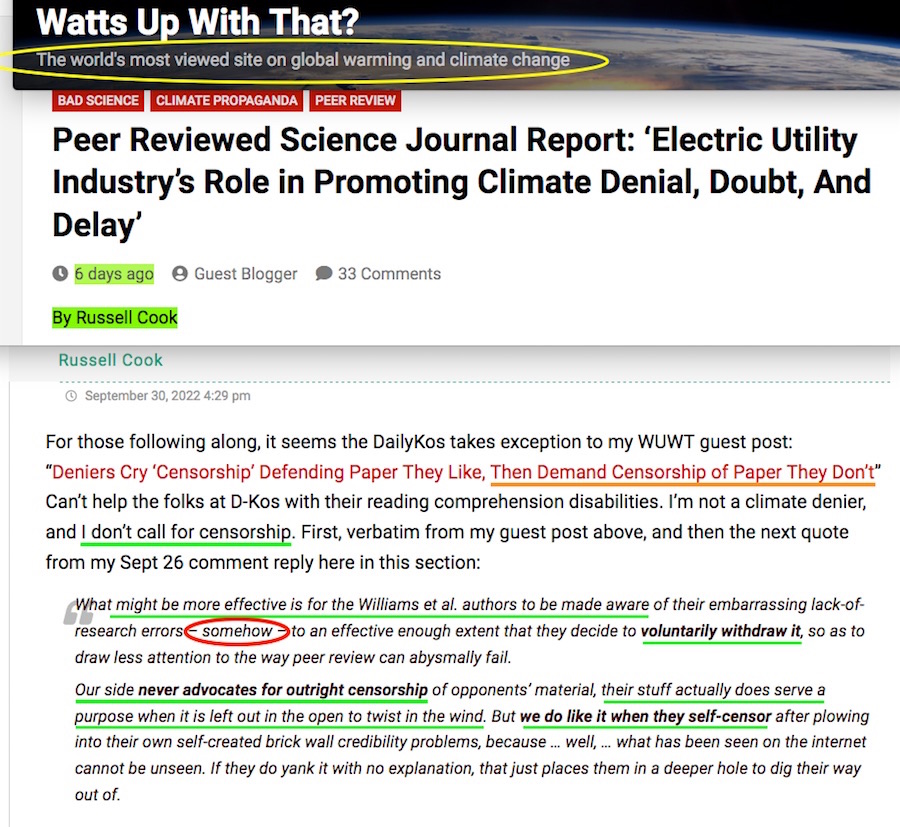 Not missing an opportunity to display the other hallmark of far-leftists, DailyKos closes out by committing an act of outright disinformation regarding the ERL paper’s particular error that reveals just how far back and to where/whom the paper’s worthless ‘disinformation evidence’ is sourced. And the hapless DailyKos couldn’t even spell the word “on” correctly.

Clear as can be at my WUWT guest post, I said errors 4 and 5 were enough to sink the ERL paper alone – nobody anywhere ran a public relations campaign operating under the directive to “reposition global warming,” and the Edison Electric Institute did not run the ICE campaign which has that operating directive falsely attributed to it.

The most hilarious angle of all here is that rather than score any crippling hits against me whatsoever, DailyKos’ own efforts draws potentially helpful additional attention to the errors, as do wider regurgitations of the piece at other leftist websites.

Who knows if someone from their side of the issue ends up prompting the ERL paper’s authors or the ERL editor to yank the paper from publication, or if minimally the “Information Council on” error in that paper will get magically fixed without any explanation. It’s possible. After all, I prompted the PBS Frontline people to alter one of their contradictory regurgitations about the alleged start date for John Passacantando at Ozone Action, which as I detailed in my February 24, 2022 blog post, was no mere typo, but instead an indicator of a sizable problem with his entire narrative about that situation.
————————————————————————
Oh, one more thing, regarding the flip question the commenter “Elpablo” has at the bottom: That’s a pure psychological projection question which “Elpablo” needs to aim directly at his own dear leaders. It is entirely because of my integrity / conscience / sense of decency and sheer personal sacrifice toward righting the defamation injustice done to skeptic climate scientists that I have next to zero material wealth at the present time.
————————————————————————
There’s more. Up next — DailyKos  inadvertently points to another major problem: “Indoctrinate the Children Well”