Since I’ve acquired a couple of online comment stalkers (more on that here) who use Desmog’s profile of me to prompt comment section readers not to take anything I say seriously, it’s now a necessity to have a preemptive strike against them. Just how worthless is that profile? Let me count the ways:

First and foremost, the veiled accusation that I’m paid corrupting money to spread lies — implied by simply linking to Desmog’s profile — is worthless as a weapon against me because Desmog never actually makes the specific case for the accusation. In fact, Desmog quotes directly from me, and I don’t dispute what the profile says about me. It turns out that if any person possessing even a degree of critical thinking has a curiosity to see what I say in full context, they soon discover my own words and my collective work completely undermines the entire accusation that skeptics of man-caused catastrophic global warming are ‘paid lying fossil fuel industry shills.’ What makes this profile so comical is how the Desmog people seem to be oblivious to this problem.

“Source” – Click on the bracketed #1 at the profile page and it takes you to the bottom of the page for all the sources of Desmog’s statements about me, 10 of them at the present time. Notice the immediate difference between my way of sourcing items and theirs – I use screencaptures and direct web links. Eight of the ten sources go to Internet Archive pages that are several years old. The two exceptions are #s 8 and 10, Desmog’s own page and one from Inside Climate news, respectively. Why do the old archive pages constitute a form of misinformation? The effect is to largely to direct readers away from all the current content at GelbspanFiles. When readers are at a 2013 archive page as opposed to my current page, they are less likely to see, for example, how I recently tore apart Desmog’s misinformation about Dr S Fred Singer’s supposed denial of the harm of second hand cigarette smoke.

“Credentials” – In noting what my college degrees are, this not some matter of courtesy or protocol, it is little more than a dog-whistle for the “you’re-not-a-climate-scientist-and-therefore-are-unqualified-to-speak-on-the-issue’ talking point, which commenters have thrown right back in my face, more than once. 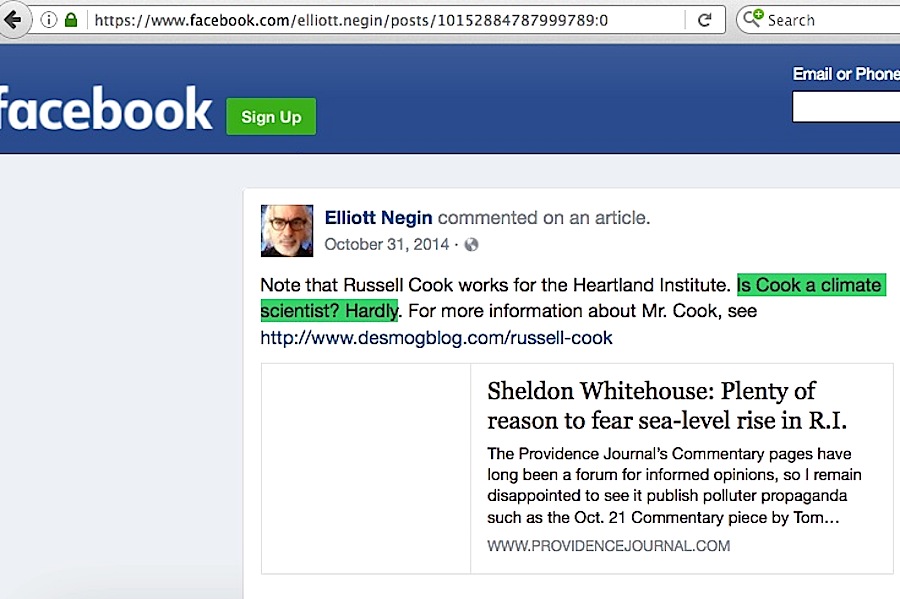 The UCS’ Elliott Negin should instead aim the question against himself. He is only a journalist. Desmog’s misdirection is, of course, their routine failure to apply this “you’re not a climate scientist” disdain to no less than Al Gore, the current and former Chairman of the IPCC, the administrators of Greenpeace, and the co-founders of Desmog themselves.

“Background: Russell Cook is a contributing editor …” – To the above-noted/screencaptured Elliott Negin and scores of others reading my Desmog profile, this is proof enough that I work directly for Heartland. The problem for them is, no, I don’t, and never have in any capacity. My December 30, 2015 blog post showed IRS evidence proving the 1099 IRS donation declaration from Heartland was not something subject to self-employment tax, and that closed the matter at a Federal level. I’ve disclosed my strings-free Heartland grant situation from the start of this blog at my About page (specifically here), but the problem clouding this is the words Heartland chose to apply to me when they first gave me my grant and created a bio page for me. Straight away, I protested the title of “expert” and offered an alternative bio. Two years later, I objected to the “editor” label, because, quite simply, I’d never edited anything at Heartland. Took a bit of persistence, but finally, Heartland now says what the absolute situation with me is.* [*Author’s 8/16/19 note: seems some glitch occurred with the page in the interim time, but here’s what the last version looked like]

I can’t state it any plainer: I do not work for Heartland in any way, contractually or as a consultant. They donate enough money for me to barely live on, and nobody tells me what to say, do or think.

“Background” (2) – I don’t dispute a word in that section, they’re my own words. What’s comical about this section is implied misinformation that there’s something damaging in it. When I say my grants are strings-free, nothing Desmog presents disputes this.

“Stance on Climate Change” / “Key Quotes” – ditto. With emphasis on the highlighted blue section in that screencapture.

“Key Deeds, March, 2015” – why did Dr Singer cc me in his email chain? Because he knows full well what I do when it comes to exposing how the so-called ‘financial ties to the tobacco, chemical, and oil and gas industries’ are worthless without evidence proving the ‘tied people’ operated under a pay-for-performance arrangement, in which all parties agreed that fabricated false material would be created, discussed, orchestrated, and approved. Desmog’s misinformation/misdirection is in the two instances of guilt-by-association. If this section is to have devastating value against me, it must be proven that Naomi Oreskes is above reproach (she is not) and that a sinister plot by Singer and associates was afoot to derail the ‘truth’ from Oreskes. In failing to do so, Desmog readers might instead perceive that Dr Singer was simply justifiably protesting advance reviews of Oreskes’ movie which termed him a “liar-for-hire.”

“Key Deeds, July 7 – 9, 2014” – Yes, Heartland invited me to speak at their 2014 Las Vegas conference. And Desmog’s inherent misinformation about it is its mere presence as a guilt-by-association item. I readily disclose that speakers at these conferences receive expenses reimbursements (hotel/airfare/airport parking). For any who insinuate this bought my words, prove it. I would have said the exact same things without those reimbursements, and Heartland gave me zero instructions on what to say. Meanwhile, one of my more endearing critics claims that merely the first 30 seconds of my presentation are enough to show that I had no business speaking about climate science. But I offered no science pronouncements in my presentation, and I don’t do that at this blog or in my online articles. Thus when Desmog fails to mention this at their profile of me, it is a form of misrepresentation which lends itself to people saying I an unqualified to speak about the science.

“Affiliations” / “Publications” – By default, mere mention of association with Heartland and CFACT is misinformation by Desmog because true believers of man-caused global warming perceive it is enough to indict anyone of being a fossil fuel industry-paid shill. Regarding the “Publications,” this is also a form of misinformation because Desmog’s link to my “ongoing list” goes to an unchanging archive page. My own blog page’s list gets updated anytime I have a piece online outside of this blog.

What’s the knockout punch to this whole exercise? While it may not be the duty of Desmog’s profile of me to dispute what I say about Desmog or its non-climate scientist co-founders James Hoggan and Ross Gelbspan (play this interview to hear him say as much just 8 seconds into it), they never dispute what I say about Desmog, Al Gore, Naomi Oreskes, “Greenpeace USA née Ozone Action” or the faults in the ‘crooked accusation,’ period. Do a site-specific search of their place for my name and the only results are the few comments I placed there, and links right back to their profile of me.

How is Desmog’s profile of me supposed to serve as proof that I’m a climate-denying liar-for-hire, when no devastating proof of any facet of this is within the profile or found via links to Desmog’s or other people’s investigations of me? Now, apply that same question to Desmog’s larger effort to portray skeptic climate scientists as climate-denying liars-for-hire. When no devastating proof exists for that, and everything behind the accusation falls apart in one way or another, who ultimately ends up having the appearance of pushing misinformation and lies?