Enviro-activists put all their faith in the notion that their superficial, repetitive fear mongering narratives about man-caused catastrophic global warming will never be questioned by the greater public. A fun video from Anthony Watts’ WUWT blog marvelously shows how the folly of such blind faith surfaces after careful scrutiny of those collective narratives. “The Arctic is warming twice as rapidly as anywhere else …”? Oops. The ‘double-the-rate’ seems to be happening literally everywhere. Back in 2012, blogger Tom Nelson illustrated how the places hardest hit by global warming — ground zero, according to screaming headlines — is, well … literally everywhere. Oops. Over just the last year, headlines naming myriad different locations still scream the same way.

I could have titled this post “No matter where you go, there he is, Redux,” or “The first, the last, and the only accusation against skeptics, Redux,” or “The story of organized denial has been well-documented, Redux.”

How? According to the piece,

“In some ways, the face of climate denial in political rhetoric has shifted,” said Matto Mildenberger, a Canadian climate policy researcher …

“It tends to be much more either, ‘We can’t do anything about it’ or ‘It’s not important enough to do right away.'”

Oops, no, that particular talking point about ‘shifting’ material from skeptics is not new at all, but instead dates back nearly two decades among an assortment of other prominent repeaters, each separated by only a degree or two from Ross Gelbspan.

But the article flies further off its own self-inflicted credibility cliff with the following bits:

Where does that first link go for the word “investigative”? To Newsweek reporter Sharon Begley’s August 13, 2007 “Global-Warming Deniers: A Well-Funded Machine” article in which she famously said,

Individual companies and industry associations …formed lobbying groups with names like the Global Climate Coalition and the Information Council on the Environment. ICE’s game plan called for enlisting greenhouse doubters to “reposition global warming as theory rather than fact,” and to sow doubt about climate research just as cigarette makers had about smoking research.

Where does the second link for the word “academic” go? To Riley Dunlap’s paper he co-authored with Aaron McCright titled “Defeating Kyoto: The Conservative Movement’s Impact on U.S. Climate Change Policy” which cites, regarding insinuations about “skeptics with strong ties to industry,” … guess who? That Gelbspan / Ozone Action. 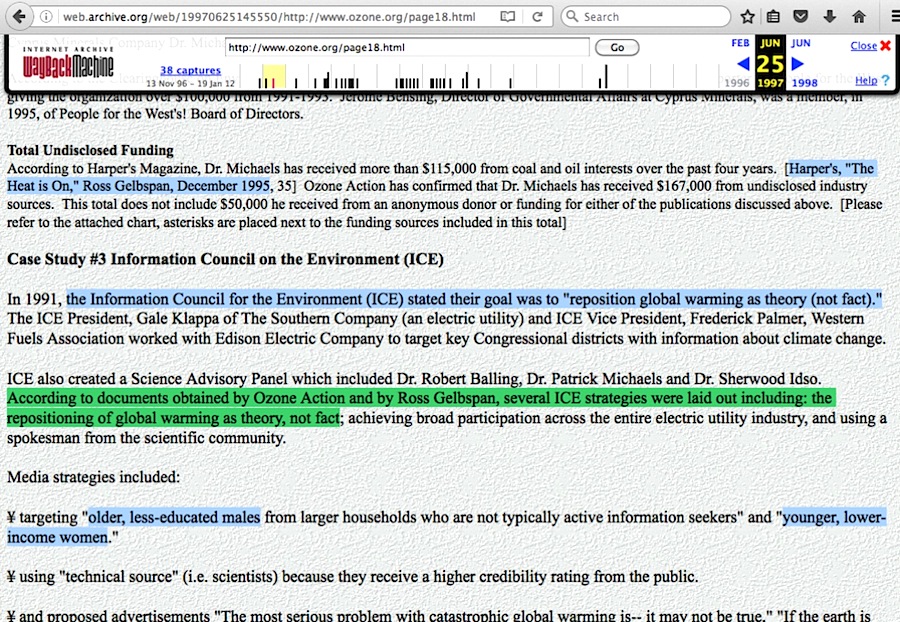 Where does the CBC News article’s third link for the word “research” go? To a Jacques / Dunlap / Freeman paper which cites Gelbspan, Robert Brulle, and the usual assortment of what I term “skeptic-trashing environmental sociologists” who either cite each other regarding evidence of a ‘fossil fuel industry climate misinformation machine,’ or Gelbspan* directly (* regarding Jacques’ other refs to ‘journalist’ Mooney there: same citation cascade problem). The CBC News article also cites John Cook (no relation to me), the same John Cook who previously noted in one of his own pieces that, with regard to overall energy industry campaign efforts designed to confuse the public, one example was,

… the Western Fuels Association, a coal cooperative, spent half a million dollars on a misinformation campaign designed to “reposition global warming as theory (not fact).”

Where does John Cook’s “misinformation campaign” link go to? An entire book chapter by Naomi Oreskes, whose page 139 citation for “reposition global warming” is to a place where nobody will ever find those memos. But in another of her works, Oreskes cites Gelbspan.

The pattern here is hard to miss.

And it’s one the September 27, 2019 CBC News story could not resist repeating:

I could go on at considerable length detailing faults / name connections elsewhere in this CBC News story (e.g. Leiserowitz’s enslavement, Mildenberger’s connection to Leiserowitz, Mildenberger’s regurgitation of ye olde unneeded media balance talking point, a.k.a. “creating false equivalency for skeptics,” etc), having only a degree or three of separation from Ross Gelbspan. Of course, there’s also the overarching fatal faults regarding widespread enslavement to those worthless “reposition global warming” memos …. but readers probably already get the point by now.

It’s actually a huge point, one far larger than global warming science, involving what amounts to no less than the total abdication of the traditional news media profession to do their basic job of reporting the truth, and investigating storylines which don’t line up right under deeper examination. While this CBC News reporter writes under a different system recognizing excellence in journalism, I’ve offered the suggestion to American reporters that none of them will ever win our top prize, the Pulitzer, for regurgitating decades old accusations about a skeptic scientists / fossil fuel industry executives conspiracy that’s riddled with holes from top to bottom, but one or a team of them could win a Pulitzer by turning the tables on whoever it is who feeds them this malarkey. (FYI, despite prominent accolades – plural – and hype – plural – guess who never won a Pulitzer?)

Same applies for whatever the top prize is for other reporters in their respective countries, because the same worthless accusation pops up on the other side of the world as well.

The opportunity to objectively investigate even one minor element of the ‘crooked skeptics’ accusation, ironically involving Gelbspan’s ‘tip of the iceberg’ Pulitzer problem, was missed back in 1997, and it, along with numerous other red flag problems, are still being missed today, much like what is happening with other major political false premise situations. Borrowing directly from Rush Limbaugh who was speaking about one of those others,

Woodward and Bernstein were unknown before their tough questions ultimately resulted in bringing down a U.S. President. They’re still M.I.A., so who will risk their career now to tell all the details, including the inconvenient truths, of the so-called ‘fossil fuel industry disinformation conspiracy,’ which might ultimately bring down a former Vice President and the entire global warming issue?