I figured that would be the end of it regarding Nathanial Rich. I should know better about such things by now; Oreskes is never the end of the line in these kinds of situations.

Nathanial Rich wasn’t content to simply leave his opinions at just a newspaper publication, he turned it into a book. Similar to many other book authors, he named who his information sources were. And, like so many other prominent enviro-activists regurgitating talking points about ‘industry-paid/orchestrated disinformation campaigns’, he couldn’t resist mentioning the “Information Council on [sic; incorrect word] the Environment” (ICE), the supposedly sinister public relations campaign that swayed national public opinion in an extraordinarily successful way, so much so that Al Gore claimed ExxonMobil later adopted its strategy goal. Deep examination of the real situation reveals the ICE campaign was actually so small that few ever saw it, its alleged strategy goal to “reposition global warming as theory rather than fact” was no more than an outside proposal which was never even seen by the top ICE administrator, and his assistant rejected the proposal because he had no idea how it could be implemented.

Adding further insult to his own injury in connection with his mention of the ICE campaign, Nathanial Rich also couldn’t resist spitting up the unsupportable talking point implication about needless fair media balance given to the skeptic side of the issue … a talking point made famous by guess who?

Just from that, loyal readers here can likely guess where I’m headed next: Nathanial Rich’s sources. 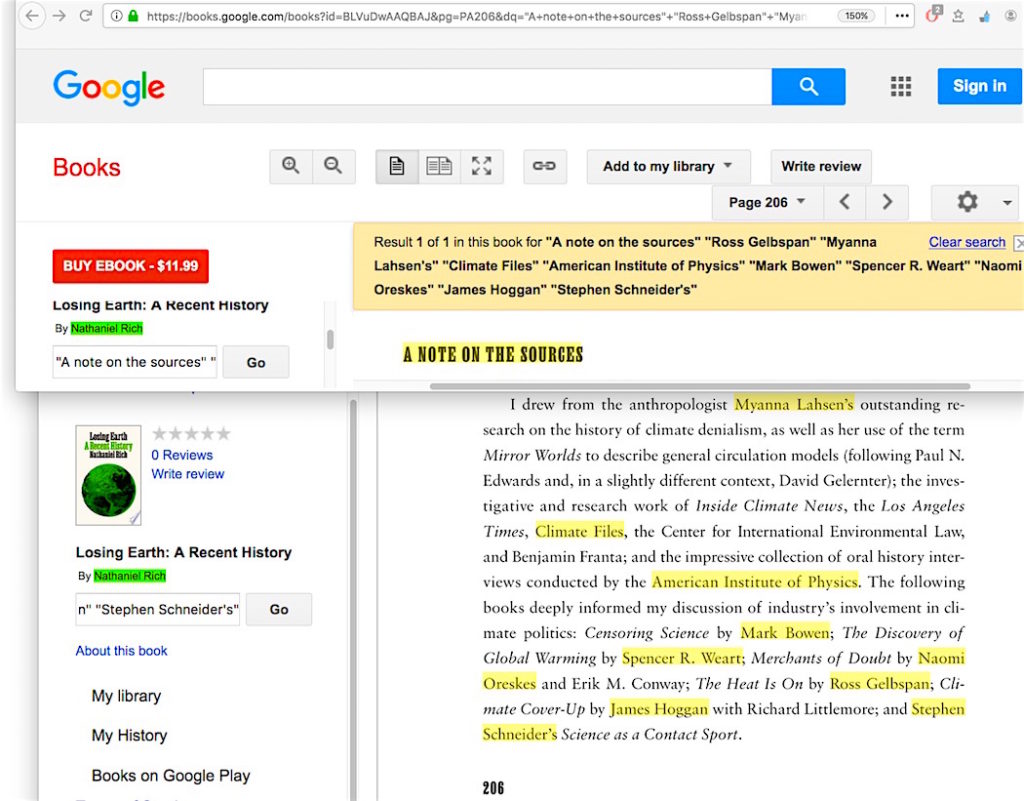 I drew from the anthropologist Myanna Lahsen’s outstanding research on the history of climate denialism …; … Climate Files … interviews conducted by the American Institute of Physics. The following books deeply informed my discussion of industry’s involvement in climate politics: Censoring Science by Mark Bowen; The Discovery of Global Warming by Spencer R. Weart; Merchants of Doubt by Naomi Oreskes and Erik M. Conway; The Heat Is On by Ross Gelbspan; Climate Cover-Up by James Hoggan with Richard Littlemore; and Stephen Schneider’s Science as a Contact Sport.

It was beyond the scope of this book to tell all the gory details of the possibly criminal and certainly immoral campaign that special interest have waged to obscure the true science and prevent any effective action against devastating climate change. Much of that story has been told by Ross Gelbspan in two books, The Heat is On (Addison-Wesley, 1997) and boiling Point (Basic Books, 2004, as well as an article in the June 1998 issue of The Atlantic. The last is the source for the quote about the ICE public relations campaign that appears on page 237.

What did Bowen say on his page 237? I’d show you directly, but the Google Books system is preventing that at this time of writing. However, what’s been seen on the internet cannot be unseen. I copied it into my computer notes pile years ago when Google Books did permit public viewing of it, and another website happened to copy it almost verbatim in its review of Bowen’s book (start date and size errors notwithstanding):

Beginning in 1988, mainly in the United States, coal companies for the most part, oil companies as well, launched an enormous public relations campaign to ‘reposition global warming as theory rather than fact.’. This was the stated goal of a campaign launched by the Information Council on the Environment (ICE) which was the creation of a second consortium of coal and utility companies. [Gelbspan observes that] an ICE campaign launched in 1991 was, according to strategy documents that were later exposed in the press,… aimed specifically at ‘older less-educated men‘ and ‘young lower-income women.’

The bracketed part of the paragraph above is from my notes, filling in the ellipsis within the book review. And the June ’98 Atlantic article Bowen refers to? It’s here, where Gelbspan says,

Since 1991 the fossil-fuel lobby has mounted an extremely effective campaign to persuade the public and policymakers that the issue of atmospheric warming is still unresolved scientifically. To take one example, in 1991 several coal and utility companies launched a program to set up interviews with journalists for three dissenting scientists. The campaign, according to strategy documents that were later exposed in the press,* was designed to “reposition global warming as theory rather than fact” and was aimed specifically at “older, less educated men” and “young lower-income women.”

*As contrasted with what he said in 2005 at Mother Jones about “strategy papers I obtained at the time.”

See the problem with all of this? Nathanial Rich, in his barely three month-old book, just like the latest of nine current global warming lawsuits, and just like Mark Bowen’s decade-old book, doesn’t need to tie himself into pretzel shapes with a citation cascade regarding smoking gun ‘leaked memo’ evidence. The only thing he and the others need to cite is Ross Gelbspan’s 1997 book.

But they can’t, can they? Put the spotlight solely on Gelbspan, and his luster quickly evaporates to reveal instead how he not only changed his tune between 1998 and 2005 about how those non-Western Fuels ‘memos’ supposedly landed in his or other reporters’ hands, he’s also done that regarding who he accuses of operating under them, and he backpedals regarding direct assertions that he never won a Pulitzer. Among myriad other ‘changing tune’ inconsistencies of his. Even the timeline for his self-described discovery of ‘industry-corrupted skeptics is plagued with problems.

Not exactly the most reliable witness to have when accusing others of engaging in orchestrated disinformation campaigns.

Arguably, that’s the politically suicidal aspect of the global warming issue. No matter which mouse-maze for the ‘corrupt skeptic climate scientists’ accusation that objective reporters, Federal investigators, and Big Energy Company defendant lawyers choose to wade into, there’s Ross Gelbspan at the end of each one …… with the shadowy figure of Al Gore looming right over his shoulder, who said the following in his 1992 “Earth in the Balance” book years before Gelbspan ever mentioned it.

Documents leaked from the National Coal Association to my office reveal the depth of the cynicism involved in the campaign. For example, the strategy memorandum notes their “target groups” as follows: “People who respond most favorably to such statements are older, less-educated males from larger households, who are not typically active information-seekers … another possible target is younger, lower-income women …