To quash the notion that no valid scientific criticism exists against the idea of man-caused global warming, enviro-activists often say “denier scientists” are paid by the fossil fuel industry to lie about the issue, insinuating a parallel to expert ‘shills’ who did the same for ‘big tobacco’. But the accusation has no punch without some kind of authoritative-sounding citation, so they inevitably invoke Ross Gelbspan’s narrative. Now, lets examine just how far and wide the successful spread of this accusation has been after Gelbspan’s first mention of it.

To the best of my knowledge, Gelbspan mentioned this accusation for the first time in a December 15, 1995 National Public radio interview,

The latest repetition of the accusation appears, ironically, only yesterday at Desmogblog:

“Reposition global warming as theory (not fact),” was the main proposition of a campaign developed in 1991 by a coalition of US coal companies. …

The second link in the above quote is somewhat predictable. The famous Canadian activist/scientist David Suzuki links to Gelbspan in just the same way at his site (last link in the 4th paragraph, screencapture here), while others choose to link to people who cite Gelbspan. There is a significant development with Desmogblog’s piece yesterday with that first link about the “detailed PR campaign”, but I will detail it in my next blog piece here.

So, you have the earliest and latest narratives with their direct ties to Gelbspan. The following examples – in no particular order – show how widely repeated it has been.

The version in the photo below (click to enlarge) at a general discussion section for an offroad vehicle forum is what prompted me to look deeper the accusation. At first glance, it sounds very plausible and quite ominous, but I soon discovered its various errors about the incorrect wording of the actual memo phrase, the incorrect tie of it to the Global Climate Coalition, Gelbspan being incorrectly labeled as Pulitzer winner, the incorrect statement about Fred Singer being a ‘tobacco scientist’, etc. 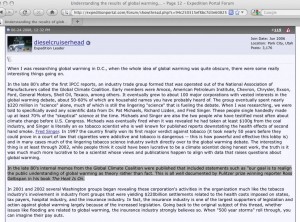 To help defeat anti-global warming initiatives, a coalition of American energy industry organizations formed a group called the Information Council for the Environment (ICE) in 1991 to, as its literature put it, “reposition global warming as theory (not fact).”

What is usually referred to as ‘leaked’ or ‘secret’ memos becomes ordinary ‘literature’ in this case, and the ‘coal industry association’ morphs into ‘energy industry organizations’. But a 2005 Seattle Times article expands Gelbspan’s trio of scientists into 12, and expands the ICE campaign’s 1991 time period about 10 times in length, starting around four years into the future,

Over the past decade, coal and oil interests have funneled more than $1 million to about a dozen individual global-warming skeptics as part of an effort to “reposition global warming as theory rather than fact,” according to industry memos first uncovered by former Boston Globe journalist Ross Gelbspan

Then we have Gore’s 2006 “An Inconvenient Truth” movie. The DVD version of it on a laptop doesn’t look like much when you hit the pause button just before the 1 hour 13 minute point, but imagine this on a giant movie screen if you haven’t seen it. For those of you who have, you’ll likely remember how it was rolled out word-for-word across the screen. 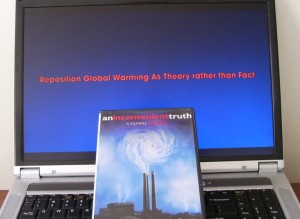 The movie companion book‘s pg 263 explains where that phrase came from,

One of the internal memos prepared by this group to guide the employees they hired to run their disinformation campaign was discovered by the Pulitzer Prize-winning reporter Ross Gelbspan. Here was the group’s stated objective: to “reposition global warming as theory, rather than fact.”

“We found an internal memo from an energy industry group from 1998, written by their disinformation specialists, saying their objective was: ‘Reposition global warming as theory rather than fact.’ That’s the same language that tobacco used.

Rather entertaining how Gore says “we” there, and gets the 1991 date of the campaign off by seven years. And Gore is not by default an ‘information specialist’? The movie impressed many others who had apparently missed the accusation previously. No need to get the details attributed to the right entity, as we see in this person’s blog, though:

Only 43% of popular media stories fully support that global warming is a fact. They have been swayed by an all-out effort from the oil industry to “reposition global warming as a debate.” As Gore points out, these are the same tactics perpetrated by the tobacco industry.

One wonders if Gore started believing the ‘oil-for-coal’ swap himself, as we hear in his off-camera comments at the Davos 2008 conference at the 29:08 point of this video,

Whatever the case, Gore’s accusation push was memorable for years. Here it is within a daily Christian Devotional blog five years after the movie came out,

In Al Gore’s disturbing documentary, “An Inconvenient Truth,” he quotes two leaked memos. One states “Reposition global warming as theory rather than fact.” The other says “Doubt is our product since it is the best means of creating controversy in the public’s mind!” Same goals, different memos. Make people doubt the truth.

I could go on with another several hundred repetitions of the accusation surrounding Gelbspan and Gore’s favorite ICE campaign phrase. But after a while, the point becomes abundantly clear. This is the only accusation there is, and it spirals back in each case to one source. Ross Gelbspan. Nobody else independently confirms or corroborates it, they just repeat it. Endlessly.  And just like Gelbspan and Gore, not a shred of physical evidence is shown to prove money was given in exchange for demonstratively false fabricated science assessments.

If multiple easily found problems with the ‘skeptic scientists receive corrupt fossil fuel industry funding’ narrative give a clear indication of how the whole accusation is in danger of total collapse, then we have a major problem with the long-held idea that there is no credible science-based opposition to the idea of man-caused global warming.