I can’t pin an exact date on this, but it was sometime this month ten years ago when I spotted an irreconcilable difference within the accusation narrative about skeptic climate scientists being paid by ‘Big Oil’ to hoodwink the public into thinking the science is not settled. I saw two claims about who first reported on this ‘conspiracy,’ and there was no way either of them would line up right. But to make the situation exponentially worse, the evidence supposedly proving the conspiracy existed within each separate accusation could not actually be readily found anywhere on the internet in its full context. This combination, I thought, was highly troubling, and was something reporters might have missed and ought to know about. It’s turned out to be a much bigger struggle to get the story out than the slam dunk tip effort I assumed it would be.

There’s not much to the actual story itself; the simplest angle of all is that enviro-activists say the science is settled and that we can ignore skeptic climate scientists because they are paid by ‘Big Coal & Oil’ to lie. The accusation is not supported by evidence. The complexity arises from all the ways the accusation implodes.

I’ve known about the basic science of the climate issue since the mid ’70s. From around the mid ’90s until right around October 2009, I was increasingly perplexed as to why the mainstream media was either completely oblivious to the existence of skeptic climate scientists’ assessments, or were deliberately ignoring them. Honest, gospel truth, I couldn’t even think of a valid reason to ignore them.

In the summer of 2008, I vaguely remember running across one reference on how atmospheric physicist Dr S Fred Singer accepted $10,000 from Exxon, but a simple search through his website turned up his explanation which utterly deflated the accusation. I didn’t even need that, really. What kind of multi-year country-wide influence could a measly $10,000 possibly buy? The accusation was illogical on its face, because it did nothing to dispute his collective level of detail disputing what the IPCC and Al Gore were saying. I assumed others would apply that kind of reasoning across the board to such accusations. Disprove the scientists’ criticisms of the IPCC first, then the icing on the cake would be direct proof that the debunked criticisms were created in the conference rooms of ‘Big Oil.’

The name right above Dr Singer’s explanation must have at least registered in my subconscious mind at that time ……. 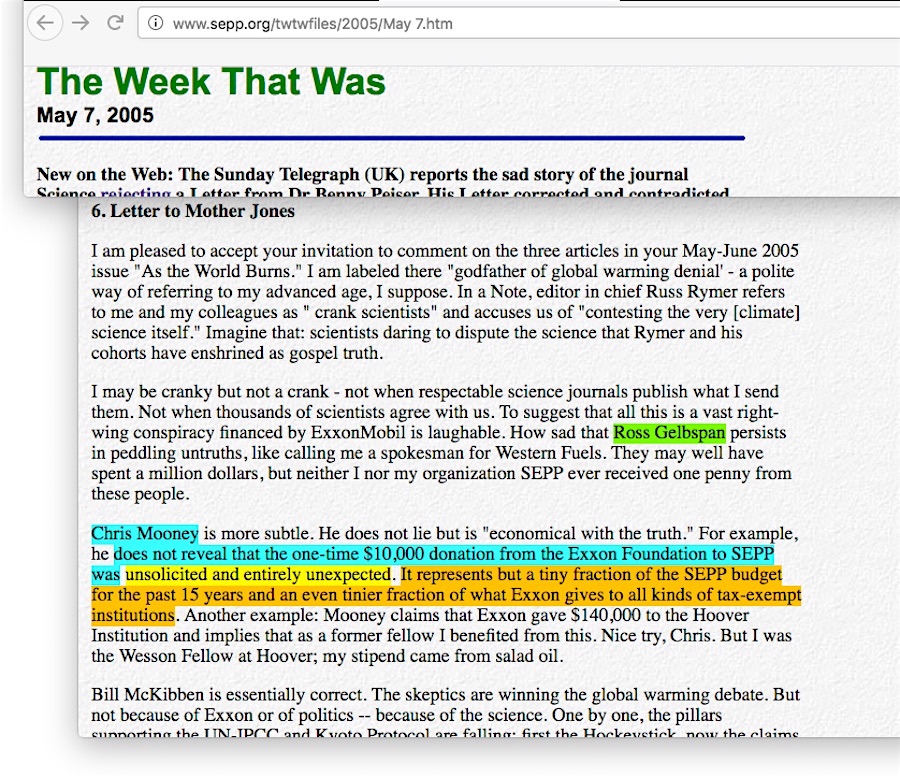 ……. because I couldn’t miss it the next coincidental two times Gelbspan’s name finally solidly registered with me as something to examine more deeply. I don’t remember exactly which one I saw first, but both were within weeks of each other sometime in late October 2009. One was from my re-reading of a summer 2008 vehicle forum post about the supposed corruption of skeptic climate scientists. 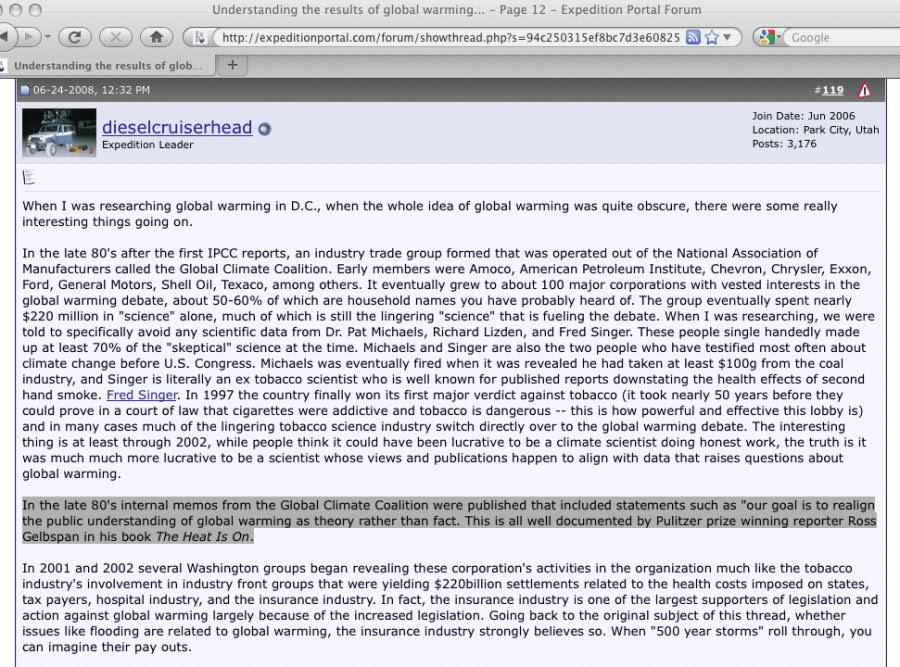 The other resulted from a small back-and-forth blog comments discussion I had with former Seattle Post-Intelligencer reporter Robert McClure about the PBS NewsHour’s exclusion of skeptic climate scientists from its program and his contention that the scientists’ “inconsistent viewpoints”* were unworthy of “false balance,”** plus they were industry corrupted anyway (*talking point #1 and **2; give him credit for memorizing those). 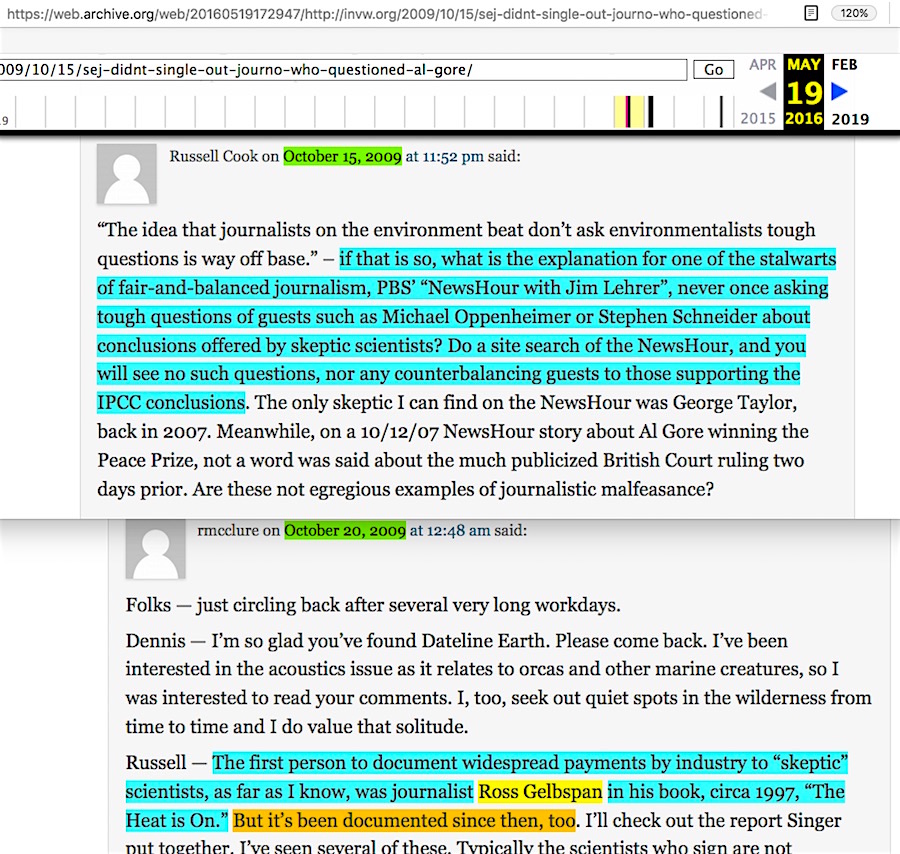 The exact sequence escapes me, but if I re-read that vehicle post coincidentally right before I started jousting with McClure, then McClure’s mention of Gelbspan’s name made it pop out more prominently for me, since I noted seeing both Gelbspan’s website months previously and Dr Singer’s other $10,000 strings-free Exxon donation disclosure. But when McClure technically bailed out of the simple task of telling me who the other reporters were who “documented” the ‘skeptics/industry execs conspiracy,’ I decided to have a look for that on my own.

Too bad I didn’t think to do screencaptures of what I found inside of the first day of my search, especially those referring to Gelbspan. Page after page after page crediting him with being a Pulitzer-winning reporter (he is not) who was the first to ‘uncover’ / ‘discover’ / ‘expose,’ or otherwise be somehow directly connected to a set of memos supposedly from the Western Fuels Association, which were implied to be the “smoking gun” proving the guilt of skeptic scientists. Al Gore’s review of Gelbspan’s then-five year old book among the pile, which like so many others, couldn’t resist quoting the memos’ strategy phrase “reposition global warming as theory rather than fact.” There was no way to misinterpret all of this unbridled hero worship of Gelbspan as anything else than that.

But one solitary, glaring exception also popped up: a March 13, 2008 US News & World Report article about the then-year old Kivalina v Exxon global warming damages lawsuit. It didn’t mention a thing about Gelbspan, it said the “reposition global warming” memo phrase was cited in that lawsuit. The lawsuit itself didn’t cite Gelbspan as the source for the memos, it cited (weirdly, I should add) an article by New York Times reporter Matt Wald, years before Gelbspan ever mentioned them.

Wait …….. what?? That citation essentially undercut everything out there at that time about Gelbspan being the lone origin of the leaked memos. And there was no mistaking what the NYT said about the source of the memos, weirdly, as I saw later.

That was the irreconcilable difference. Either superhero award-winning investigative reporter extraordinaire Gelbspan was the first reporter to expose those ‘smoking gun’ memos, or it was Matt Wald.

It all went downhill after that. Enviro activists love to compare the tobacco industry’s “Doubt is our product” leaked memo to the supposed fossil fuel industry’s “Reposition global warming” memo. Unlike being able to find the “Doubt” memo in its full context in less than a minute, it took me seven additional months to find the “Reposition” memo set, buried deeply in Greenpeace’s archive scans, minus any direct links to it anywhere in late 2009. The only reason why I found them there is because I ultimately figured out who “Ozone Action” was.

Exponentially compounding that particular problem, I immediately began to see how nothing in the overall ‘crooked skeptics’ accusation lined up right. Whenever that first day of discovery was for me 10 years ago, not a single day went by afterward where nice tidy answers revealed the ‘scientist shills on the payroll of Big Coal & Oil’ accusation being valid. Only more and more questions about the inconsistencies of all the different angles of the accusation, and the core people promulgating it. Why, for example, was Gelbspan described as a reporter, when there’s no indication he was doing freelance investigative reporting or was on any news staff, when he ‘discovered’ those memos?

I had to laugh when I saw the “if you see something, say something” plea for preventing terrorist acts applied to Naomi Oreskes. How ironic. I saw something in the way the timeline for her foray into the issue didn’t add up right, and in her other unforced errors, So, I said something to politicians and reporters about her political advisory efforts about why she looked less like a concerned scientist who saw something threatening to the public welfare about her critics’ associations and more like a propagandist who was part of a larger effort to sway the public away from examining what skeptic climate scientists have to say.

Regarding Ross Gelbspan’s role in this whole mess, when I couldn’t immediately find a reporter to tell what I’d found, I told it myself.

This last ten years has been a huge sacrifice, I’ll say that much, considering how I might have been able to enjoy much more financial security if I hadn’t embarked on this altruistic path. As I’ve already fully disclosed, I live at a sub-poverty level of existence in order to continue down this path full time.

It hasn’t been for a lack of trying on my part, that this massive problem hasn’t broken out as a major story. My computer’s tally of outgoing emails to members of the media is approximately 1400 dating back to October 2009. Nearly all went unanswered, a few replies were oddly defensive and a few expressed genuine interest. Why haven’t I been more successful getting the story out among in the side of journalism that doesn’t display an obvious bias toward the IPCC / Al Gore side of the issue? Probably the combination of lousy luck on my part, and the overwhelming amount of other egregious news items reporters must cover.

My efforts are ongoing. Recently, a reporter I contacted told me he was unfamiliar with the names Kert Davies and John Passacantando, a pair seen at the epicenter of the smear of skeptic climate scientists. One of his latest articles demonstrated how he certainly knows about them now.

What does the future bring regarding this story? Who knows? To paraphrase a line from the Castaway movie, some days it feels like I’m never gonna get off this island, and all my logic says energy companies will never take the politically correct position to stand up against their accusers, and objective reporters will never have enough time to comprehend the enormity of the smear of skeptic climate scientists. But one day my logic may be proven all wrong, because the tide will come in and give me a sail.

Wish me luck; but better yet, lend me a hand if you know objective, influential people who can get the merchants of smear story rolling with more momentum. Knowledge is power, networking is priceless.