It isn’t hard to find criticisms of how the famous and supposedly non-political Science magazine has succumbed to a partisan anti-science position on catastrophic man-caused global warming (e.g. here and here), but since I have stated on several occasions, that I have no science expertise at all (which was twisted by my critics, e.g. here and what used to be here), I leave those criticisms to other experts. Today, however, I can use my own expertise to show how Science ran off the rails in 2011 regarding the single-source notion that skeptic climate scientists are paid industry money to lie…. and how this old situation has a direct tie to enviro-activists’ current efforts to use racketeering laws to persecute people who criticize the notion of catastrophic man-caused global warming.

This was something of an accidental discovery on my part, but it only helps to solidify what I’ve long said about the way the ‘industry-corrupted skeptic scientists’ accusation falls apart no matter how or where it is viewed. Long story short, I was looking into a semi-related topic and it branched into several different paths, including one to …..

Since Riley Dunlap is on my list of ‘skeptic-trashing sociologists,’ it didn’t surprise me in the least to see him list names I readily recognized no further than one page into his paper,

… For years the denial machine and its campaign attracted little attention, as its operatives succeeded in masking their efforts as legitimate scientific debate while the interests and motives behind their attacks on climate science and individual scientists such as Benjamin Santer were largely shrouded from scrutiny (Oreskes & Conway, 2010). Investigative journalists, most notably Ross Gelbspan (1997), took the lead in analyzing the denial machine, and then a few social scientists joined in the effort (Beder, 1999; Lahsen, 1999; McCright & Dunlap, 2000, 2003). Journalists have continued to make crucial contributions to understanding the denial machine  (Begley,  2007; Gelbspan,  2004;  Klein,  2011;  Mooney,  2005;  Pearce, 2010;  Pooley, 2010), but  particularly in the past 5 years a growing number of social scientists and other analysts—ranging from historians (Weart, 2011) to ex-government officials (Piltz, 2008) to citizens committed to defending climate science (Kintisch, 2011)—also have provided analyses of the denial machine.

Who is the topic of this article? John Mashey, a person I’ve already detailed in one of my blog posts here, no less than Desmogblog’s John Mashey, a blogger there since October 2011 who additionally uses that place as a publisher of epic-length reports about money payments to skeptic people, devoid of evidence proving the money was in exchange for fabricated science assessments meeting the approval of the payers. To article writer Kintisch’s credit, he does say “Mashey has become one of the most visible of a new generation of citizen climate warriors…”, but to his discredit, Kintisch does not name any other ‘warriors.’

What the article does instead is get itself into deeper water.

He was drawn into the swirling climate debate in 2007 after hearing a lecture on climate skeptics by University of California, San Diego, science historian Naomi Oreskes at Stanford University, which is near his Portola Valley home.

Mashey contradicts that assertion with his own words at a 2008 blog post (full text of his – no joke! – 4,600 word August 21 comment #108 here) about IPCC climate scientist Dr. Stephen Schneider,

I’ve heard him talk a handful of times, was lucky to be the “discussant” for one of his seminars. (I’d just read Lomborg’s TSE and was still working through it, so I was supposed to be the “skeptic.”)

That seminar was held on January 9, 2002, over five years before he attended Oreskes’ presentation. Schneider’s “Why this lecture is important” link at that page directly mentions Mashey in a way that would hardly be mistaken as a situation in which Mashey was not already drawn into the swirling climate debate.

The Science article then apparently commits a giant sin of omission after the above questionable assertion.

Mashey decided to join the nascent community of nonscientist climate bloggers by preparing documents that dissected what the opponents were actually saying. (He maintains no blog but publishes documents through allied sites.)

Who was this ‘nascent community of nonscientist climate bloggers?’ Mashey himself said in his 2012 Youtube presentation starting at the 11:07 point, “In 2007, I’d heard this speaker Naomi Oreskes … heard her give a really good talk on the roots of climate anti-science, and then there was an attack on her that was really nasty … In the meantime of helping Naomi defend herself, she introduced me to the Desmogblog folks who are based in Vancouver, and they have ended up helping me publish a bunch of reports…” Again, “allied sites” gets reduced to just one site, Desmogblog. As apparently indicated by a site-specific 1/06-1/08 search which show Mashey’s earliest comments placed at Desmog posts, Oreskes’s introduction of him to the site could not have occurred after September 2007. Where did the documents he “prepared” first appear? Just months later in 2008 at Desmogblog – an organization with arguably questionable beginnings.

Readers here are welcome to dive into Mashey’s 40 page document if they wish to see whether he succeeds in defending the actual position of Oreskes’ starring role in Al Gore’s movie (more precisely described as her infamous 2004 Science magazine paper on the 928-to-0 consensus for man-caused global warming) or if it is instead an exercise in character assassination against her critics. What troubles me are instances within it where he mentions Exxon funding of people who are associated with Oreskes’ critics. Readers get no further into it than the third page before seeing the Exxon name …… but not a scintilla of evidence is provided proving fossil fuel industry funding came under explicit instructions to fabricate false criticisms of Oreskes. Exxon is mentioned over a dozen times in the document, but the most that’s presented regarding what this means is simply speculation from Mashey.

Did Mashey do any better in his February 2012 213 page “Fake science, fakexperts, funny finances, free of tax” document? No. Regarding the funding of Dr Robert Balling, his supposedly damaging evidence links to a SourceWatch page. The SourceWatch page in turn cites a Minnesota newspaper grievance hearing, and who’s the person cited at the hearing over the funding accusation? Ross Gelbspan. Where were SourceWatch’s uncited names of “the British Coal Corporation, Cyprus Minerals and OPEC” first seen? At Ozone Action’s 1996 page (Kuwait is a member of OPEC) about Dr Balling … where Ross Gelbspan is unavoidably seen in the midst of that information. Never forget where both Oreskes and Al Gore get their core indictment “evidence” to indict skeptic climate scientists: “According to documents obtained by Ozone Action and by Ross Gelbspan, several ICE strategies were laid out including: the repositioning of global warming as theory, not fact.”

That’s not the end of it, that’s just another tip of the iceberg. Mashey cites Sheldon Rampton’s SourceWatch site around 110 times in this document. Who was Rampton’s primary source for the ‘corrupt skeptic climate scientists’ accusation before he formed SourceWatch? As I detailed in my February 10, 2015 blog post, it was Ross Gelbspan, And let’s not forget how it was Rampton who not only got the “reposition global warming” phrase into Wikipedia, but also into the U.S. Congressional Record (full text here). Can’t emphasize it enough: any prominent ‘corrupt skeptic climate scientists’ accusation is only separated from Ross Gelbspan by three degrees or less. Science –> Mashey –> SourceWatch –> Gelbspan.

But, back to the Science magazine article, and the manner in which two quotes from Mashey are essentially the antithesis of what the magazine should stand for (screencaptures here and here):

He likens his current activities to the corporate intelligence efforts he once undertook and to investigations of organized crime. “You see what they’re doing, who they talk to. Then what you do is, you hope they make a mistake.” ……

Mashey believes that vanquishing scientists’ foes will serve a higher purpose. “It’s up to some of the rest of us to help get these guys off your backs so you can do the science,” he tells his scientist allies. He thinks discrediting their opponents also allows society to focus on the biggest problem: the need to reduce greenhouse gas emissions. “Goal number two is, try to help lessen the impact of climate anti-science on public policy before it commits the U.S. to be an increasingly bad place to live.”

Anyone entering into any investigative effort – whether it concerns a science phenomenon, a legal matter, or a journalistic situation – while holding a preconceived conclusion and hoping that someone will make a future error, is the personification of what it means to be “anti-science.” An objective unbiased investigator gathers all evidence and analyzes whether conclusions about what’s gathered are valid. In my case, I didn’t enter into what I do with the objective of nailing Ross Gelbspan and people like him to the wall, it was instead a pair of favorable bits about him (here and here) which prompted me to find out more about his work.

Regarding the very latest news of the U.S. House’s Science, Space, and Technology (S.S.T.) Committee request for information from particular enviro-activist groups and Matt Pawa’s law firm (one of three specific people I named in my 4/22 American Thinker article), it should be noted that the request concerns the situation surrounding a 2012 Oreskes-created workshop in which Pawa, along with Desmogblog’s Jim Hoggan were attendees. Desmogblog’s John Mashey was also one of those attendees. If the scope of the S.S.T. Committee’s widens to include requests to Oreskes and Desmogblog people, it is not my personal hope that those people will make mistakes, they either have done so already or they have not. The goal is to get legitimate investigative questions answered in regard to the far larger question of whether one side or the other uses climate anti-science to impact public policy. 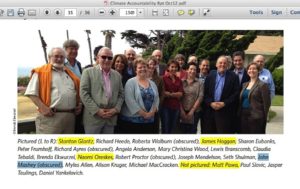