Greenwire’s old dawn-of-the-internet age June 20, 1991 electronically shared news brief, which could not be easily found by the general public …. has been found. Now, let’s see what’s in it.

Knowledge is power, networking is priceless. The reporter I noted in the above screencapture link from my October 2017 dissection of the San Mateo-Marin Counties / City of Imperial Beach v. Chevron cases contacted someone who had access to the “Lexis Advance and Nexis databases,” and now the full text of the Greenwire brief (barely over two pages) is here in PDF form. I’ve added some notes in the side margin.

One thing is absolutely established within this brief: it contains a direct reference to the infamous set of so-called leaked memos attributed to the Western Fuels Association’s “Information Council for the Environment” (ICE) public relations campaign which untold numbers of enviro-activists say are evidence of a deliberate misinformation effort undertaken by the fossil fuel industry which paid skeptic scientists to falsely downplay the peril of catastrophic man-caused global warming. This brief does not quote the “reposition global warming” strategy goal that Al Gore spelled out full screen in his 2006 movie in comparison to a leaked tobacco industry memo – the former of which he said Ross Gelbspan discovered – but it does quote the targeting memo phrases which Gore had in his 1992 book years before Gelbspan first spoke of them. Click image to enlarge: 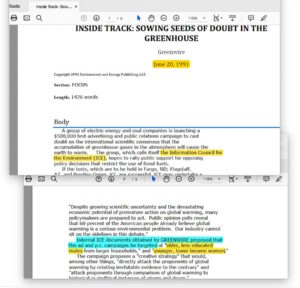 This set of so-called “ICE memos,” as I’ve repeatedly emphasized throughout my GelbspanFiles blog, are worthless as evidence to prove an industry-skeptic climate scientist misinformation conspiracy exists. The ICE public relations campaign was not the sinister industry effort it was portrayed to be, and these ‘alleged’ ICE memos were never even part of the ICE campaign.

The June 20, 1991 date of this Greenwire brief is important because, as far as I can tell at the present time now, it is the first time any news media quoted those so-called “ICE memos.” Previous to this blog post, I could only say the first appearance of these memo quotes were in Mary O’Driscoll’s June 24, 1991 The Energy Daily article titled “Greenhouse ads target ‘low income’ women, ‘less educated’ men” (I don’t yet have a copy), which is corroborated by an Eco Geneva newsletter dated June 25, 1991 containing extracts from her article. O’Driscoll’s article gives no credit to Greenwire for this information and doesn’t quote the “reposition global warming” strategy memo phrase, but notes instead that the targeting memo phrases were in “documents circulated around Washington D.C.” In the section prior to O’Driscoll’s article, the Eco Geneva newsletter does quote the strategy memo phrase, without saying where they saw the memos.

Accusations based on faulty evidence don’t just materialize out of thin air; investigators will want to know exactly what the origins are and what the earliest participants knew about the ‘evidence’ and when they knew it. It’s plausible that Mary O’Driscoll merely repeated the targeting phrases from the Greenwire brief, along with potentially supplemental material accompanying the brief which might have described eco-groups who had copies of the memos. Considering the amount of additional detail the Eco Geneva staff quoted from the memo subset that was never part of the ICE campaign, they might have been one of the groups who were given leaked copies of the ‘complete ICE memo collection,’ and predictably ran on a conclusion which matched their ideological beliefs. The critical question here is whether Greenwire – and its publisher, former NYT reporter Phil Shabecoff (described by NYT superiors as ‘growing too close to his environmental sources’) – undertook basic journalistic due diligence to see if the ‘leaked memo evidence’ actually was what it appeared to be.

Besides that basic problem, there is another very large problem revealed in this Greenwire brief.

A spokeswoman for the Edison Electric Institute emphasized to GREENWIRE that the electric utility trade group is taking no part in the campaign except to provide survey results.

When prominent accusers aren’t directly attributing the ‘reposition global warming’ conspiracy to Western Fuels Association’ ICE PR campaign, they’re seemingly trying to sidestep potential problems with that by saying this was an Edison Electric Institute (EEI) effort. The current Wikipedia page for the ICE campaign implies as much. Also among that latter pile is a July 2017 Miami New Times “Public Utilities Knew” article containing the EEI / “reposition global warming” tie-in. The article’s source for that is an Energy and Policy Institute report summary page which claimed,

In 1991, EEI and Southern Company spearheaded the Information Council on the Environment ad campaign, which listed as its top strategy an effort to “reposition global warming as theory (not fact).”

No, it didn’t. But where does the Miami New Times link for the “reposition global warming” phrase and the Energy and Policy Institute’s pair of links in the passage above lead to? They all go to Kert Davies’ ClimateFiles ICE page. That Kert Davies, the person working at the old Ozone Action environmentalist group not long after the time when they mysteriously “obtained” the alleged ICE memos.

As Ron Arnold detailed in his June 2016 exposé about book author / documentary movie star Naomi Oreskes’ role in the ‘crooked skeptics’ accusation, the memo subset containing the “reposition global warming” / “older, less-educated males” / “younger, lower-income women” strategy/targeting memos was a part of a lengthy proposal submitted to the ICE campaign administrators that was rejected and never used. How could EEI “spearhead” a PR campaign that they actually denounced?