As I detailed before in my various blog posts, the supposedly leaked “reposition global warming as theory rather than fact” memo strategy is worthless-as-evidence to prove Big Oil & Coal executives colluded with skeptic climate scientists to deceive the public about the certainty of man-caused global warming, quite simply because it was an unsolicited proposal to a tiny and very short-lived public relations campaign, and nothing in that proposal was ever implemented within that PR campaign. Or outside of it, for that matter; I have it directly from one of the administrators in that campaign that their copy of the proposal was literally thrown away. Yet somebody else in the circle of people in that campaign thought their own personal copy of the rejected proposal with its awkwardly worded strategy goal attributed to the never-used name proposed to the campaign and its basically illogical audience targeting goals was not only worth saving, but also worth leaking to enviro-activists in 1991, namely the Sierra Club (which otherwise never breathed a word of it to anyone), and to Senator Al Gore.

Meanwhile, I’ve seen individuals (described elsewhere less politely) unquestioningly repeat the “reposition global warming” accusation in religious devotional blog posts and vegetarian blog posts, or as a core part of PhD dissertations; and I’ve seen it casually slipped it into ‘the shipping news,’ and prominently featured on the U.S. Senate floor. The latest regurgitation of it popped up just a couple of weeks ago, in this woeful meme illustration, top right panel: 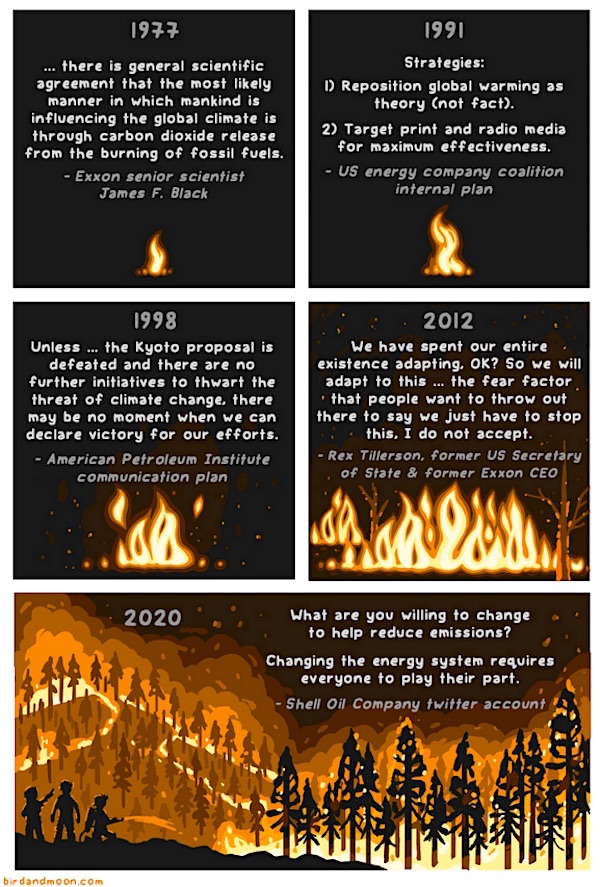 The artist, who otherwise specializes in “books and cartoons that connect people with the natural world” first offered an apologetic explanation before Tweeting the above meme illustration on December 2nd. While it may be hard to quantify how many people view blog posts or Senate speeches, Twitter shows viewers how big the reaction is to an account holder’s Tweets. In this case right at the time of publication, the artist has experienced over 4,600 shares of it on Twitter, and 10,500+ people indicated their “Like” of it.

And 175 people so far** [See author’s 12/30/20 update at the end of this post] have retweeted it with some kind of commentary attached. There are the predictable ones about evil industry / comparisons to Big Tobacco, along with sadness, glowing praise, links to other pieces enslaved to the same “reposition global warming” line (the fatal faults of which I detailed here), foreign language translation for teaching to students (an action beset with pitfalls when that’s done without question), and so far, at least one veiled threat of violence against the evil-doers behind ‘climate change disinformation.’ One other reply went further, advocating the guillotine for corporate criminals, along with somebody else agreeing with that suggestion, but they aren’t there anymore because they violated Twitter’s policy against advocating of violence or harm to other people.

Regarding the artist’s supposedly damaging quotes intended to evoke sorrow and anger at an industry bent on destroying the planet, they start to quickly fall apart under objective examination. The bottom-most panel quoting a pair of sequential Tweets from Shell Oil simply illustrates the sheer pointless folly of oil companies of trying to appease enviro-activists when no amount of appeasement will ever satisfy them. Put the absolutely identical wording in a tweet from Greenpeace and the meme artist here and all her friends would be surprised if Greenpeace hasn’t already said it, no different than the way the other supposedly devastating “victory will be achieved” memo phrase* associated with her #3 API panel ends up looking like little more than a truism when mirror-flipped for Greenpeace’s own usage. *(hold that thought about the Greenpeace-sourced scan page for API memo, it’ll come up again below)

Regarding her fourth panel 2012 quote from then-Exxon CEO Rex Tillerson when he spoke at a 2012 Council on Foreign Relations meeting, same basic problem, compounded by her quote of Tillerson lacking full context. He was fully in favor of mitigating man-caused global warming, which bothered skeptics of the issue when President Trump appointed him five years later as Secretary of State. Enviro-activists should have applauded his obvious lean toward their viewpoint, but instead they missed a golden opportunity to use him as a tool to flip President Trump the way GOP presidential candidate John McCain was flipped to being a global warming believer.

The artist’s top left panel, on the 1977 James Black Report to Exxon concerns a dubious set of claims seen in the majority of current global warming lawsuits which I detailed at some length here, while noting in that post how the Black Report’s predictions were further taken apart here. Exxon knew the polar regions were going to heat up 43 years in the future several degrees hotter than they literally are right now in 2020? Apparently not.

Then there’s her two remaining panels, the one on the 1998 API memo (notice how she chose to not include the words “‘climate change’ becomes a non-issue, meaning that” from the memo – quite a difference from her more sinister-sounding version “Unless the Kyoto proposal is defeated”), which was a memo set otherwise * and never implemented, in addition to myriad other problems, which ultimately render it worthless as evidence proving oil/coal industry disinformation campaigns exist. And finally, there’s her panel featuring the “reposition global warming” strategy phrase, which is equally worthless as evidence proving any corporate disinformation ever existed anywhere involving collusion between industry execs and skeptic climate scientists to deceive the public. [*Author’s 5/13/21 note: this is corrected/clarified here]

I could simply leave this situation right there, since this exercise shows once again how the true believers of global warming only offer two sets of very dubious ‘leaked industry memos’ supporting their notions about industry-led disinformation campaigns, and how oblivious that side is to the sheer worthlessness of these memo sets. In this case, I could make an educated guess on where the meme artist sourced her information on those old leaked memos, but that’s all I’d have to offer. To drive home the point on how these memos are themselves part of an ongoing disinformation campaign by a core clique of enviro-activists who apparently swim in dark money, it would be nice to prove it. Unlike some of those instances I mentioned further above of individuals unquestioningly promoting the “reposition global warming” memos, the artist included her direct email address among the publicly seen tweet replies, and it’s on public view at one of her bio pages. So, here’s the inquiry I emailed, verbatim:

I just now spotted your Twitter meme via one of the multitude of retweets of it. Quite impressive how your message is shared!

I know of the 2012 quote from Tillerson at a Council on Foreign Relations interview that the guy at the Wall Street Journal moderated. But I’m wondering which specific source or sources you used for the quotes in your 3 other panels. They are common quotes, I ask because some people say they are from some particular website, unaware that the site is more like a third-hand repeater from the original source. It’s sorta like a genealogy exercise.

She responded in within minutes: 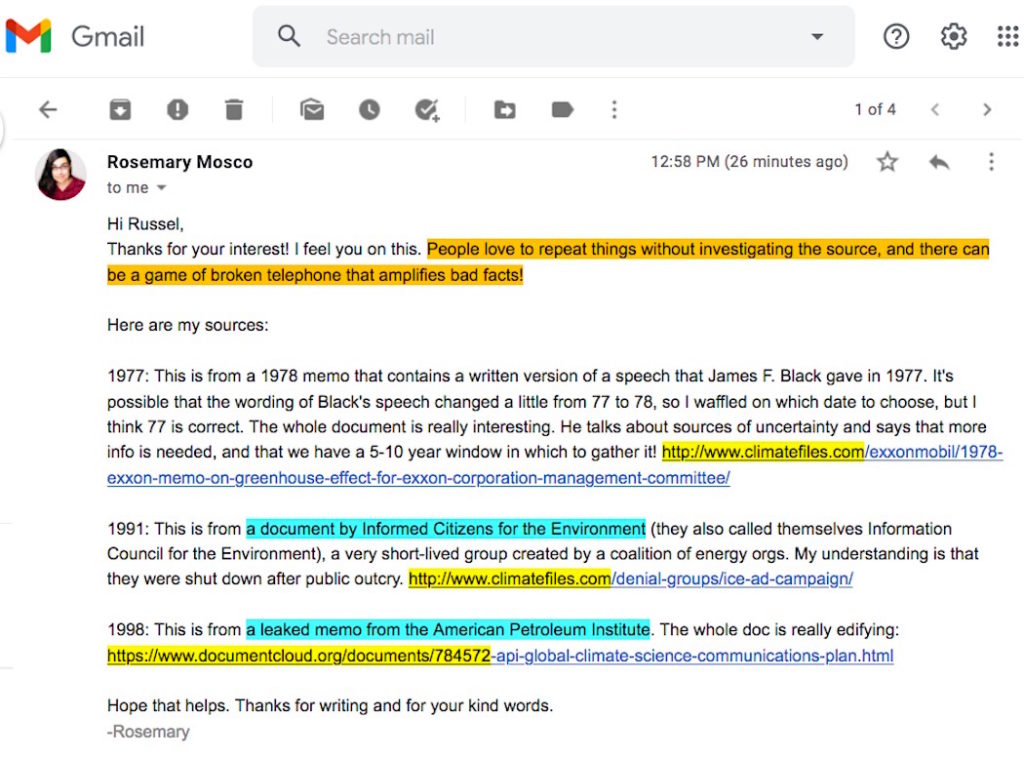 My educated guess turned out to be exactly what I expected. Meanwhile, her opening line exemplifies what’s fatally wrong with the entire ‘crooked climate skeptics’ accusation:

People love to repeat things without investigating the source, and there can be a game of broken telephone that amplifies bad facts!

Which is absolutely, precisely, exactly the blunder she committed when she created her meme illustration.

I, on the other hand, investigated the source of the “reposition global warming” memo set when I re-read it in 2009 at a hobby forum page, before I ever repeated it. Inside of the first day of trying to find the memo set in its full context, I found irreconcilable differences on who was credited with first revealing it to the public, and as I mention in my October 22, 2015 blog post, it took me seven solid months just to find the scans containing that set buried in Greenpeace archive scans which Greenpeace itself never publicized. In subsequent years, got it confirmed in direct conversations with the president and top administrator of that old “Information Council for the Environment” (ICE) PR campaign that they never operated under the “reposition global warming” / “older, less-educated males” / “younger, lower-income women” strategy / targeting memo phrases, and I got it further directly confirmed from the head of the ad agency and its publicist and the three scientists providing their science expertise to the campaign that not a single one of them had ever heard of the ‘strategy / targeting’ guidelines they were supposedly working under. All have expressed surprise to see just how much air time is given to a set of memos that basically nobody saw. On top of that, I got all of that and more independently corroborated by article writer / researcher  Ron Arnold, who directly interviewed more participants of that ICE campaign than I had access to, in his examination of the ‘Naomi Oreskes connection’ to the memo set.

How will the meme artist here, who I’ve labeled without her name as a matter of courtesy, react to all of this, along with the people tweeting glowing support of her work? Consider that she has apparently already deleted replies from critics, and as noted previously, others suggest outright execution for people whose family and friends would dearly miss them after they were killed for association with ‘leaked memo sets’ having zero real world significance, other than as weapons used against them under irrefutably false pretenses.

Would they all realize, and feel deep remorse, about being participants in a real-world variant of the “Ox-Bow Incident”? 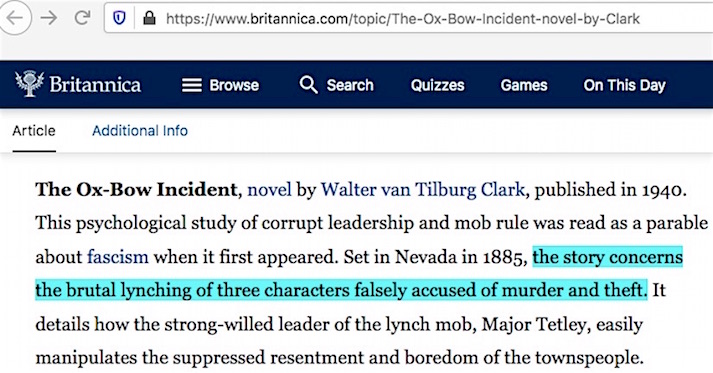 Think about it as it applies to the overarching problem Al Gore faced when he first ventured the idea of catastrophic man-caused global warming back in the late 1980s. The late IPCC climate scientist Dr Stephen Schneider identified the problem early on: if the public perceived there was only an unresolved argument between two sides of the science debate, they’d tell Gore and the scientists to go away and report back when they actually resolved it. How do you circumvent debate that undercuts your agenda? Label your opponents as corrupt monsters who need to be killed.

The “reposition global warming” memo phrase is just that effective of a debate killer to this very day, up until the point where a majority of people start examining it deeply. The question for the meme illustration artist here and for her friends is if they would execute somebody because they feel the person has committed a crime, or because they could actually prove that any sort of crime was ever committed.
————————————————————————
[**12/30/20 Author’s update: the meme artist, evidently impressed with the sheer response to it (compared to responses to nearly all her other direct posts that don’t rise much higher than double digits for replies and mid-triple digits for “Likes,” apart from occasional 1000+ “Likes”), tweeted the illustration a second time on December 17th. Upon seeing that, I thought it would be worthwhile to see how much of a response the second one got after a 12-day span of time, in comparison to what I saw for the totals around 12 days after she tweeted the illustration the first time On December 2. The difference in numbers is striking. That prompts me to add this post to my “What $5 Mill Might Buy” category, since one way to spread the ‘crooked climate scientists’ accusation might be – if you had that kind of mega-money at hand – would be to purchase a means of spreading a particularly effective form of the accusation in a viral-like manner, when it otherwise would find very little reception under ‘natural’ conditions.] 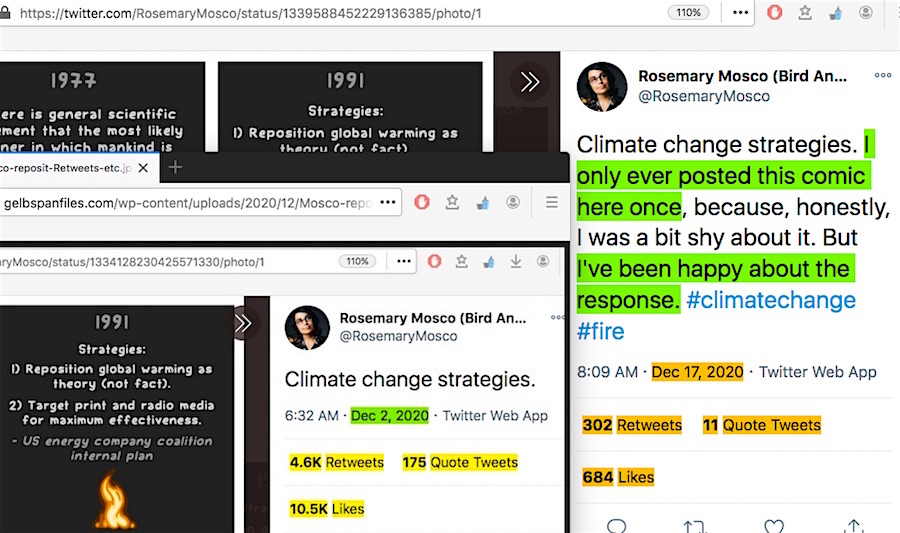