Specifically, the Minnesota vs. API, et al. global warming lawsuit filed on 6/24/20 which I had previously labeled as an “independently-led” lawsuit in my list of all the “Exxon Knew”-style lawsuits that allege fossil fuel company executives colluded with skeptic climate scientists to spread disinformation designed to undercut Al Gore’s ‘settled global warming science.’ In my June 26, 2020 dissection of this lawsuit, I noted how it rather predictably followed what appears to be an almost standard template for such lawsuits, where it dutifully offered both the worthless “reposition global warming” memo set (PDF file page 32) and the similarly worthless “victory will be achieved” memo set (PDF file page 34) as evidence to prove industry-orchestrated disinformation campaigns misled the public. The usage of both memo sets is a hallmark of what I term the ‘boilerplate-identical’ lawsuits being handled by the Sher Edling law firm. It seems Sher Edling never learned that both sets were unsolicited by the groups they were proposed to, and that neither set was ever implemented in any fashion by any industry people as goals to achieve or guidelines to follow.

At the end of my dissection, after noting many other troubling connections between the lawsuit and longtime promulgators of those worthless memo sets, I asked a basic question: was this lawsuit an entirely independent effort undertaken by the Minnesota Attorney General’s office, or is there some kind of larger multi-state / municipality coordinated prosecution effort going on? A bit over a week ago, a new complication to the question appeared which doesn’t look especially helpful to the Minnesota AG’s office, or for any of the others filing such lawsuits.

The ‘complication’ came in the form of news items from the Climate Litigation Watch site’s December 18 “More of What MN OAG is Hiding: Tort Firm Formally Enters Fray” post, and from Energy in Depth’s December 22 “Revealed: Minnesota Attorney General Enlists Sher Edling For Climate Case” post, both of which link to a specific pair of court announcements about Vic Sher and Matt Edling being added pro hac vice to the Minnesota AG office team. 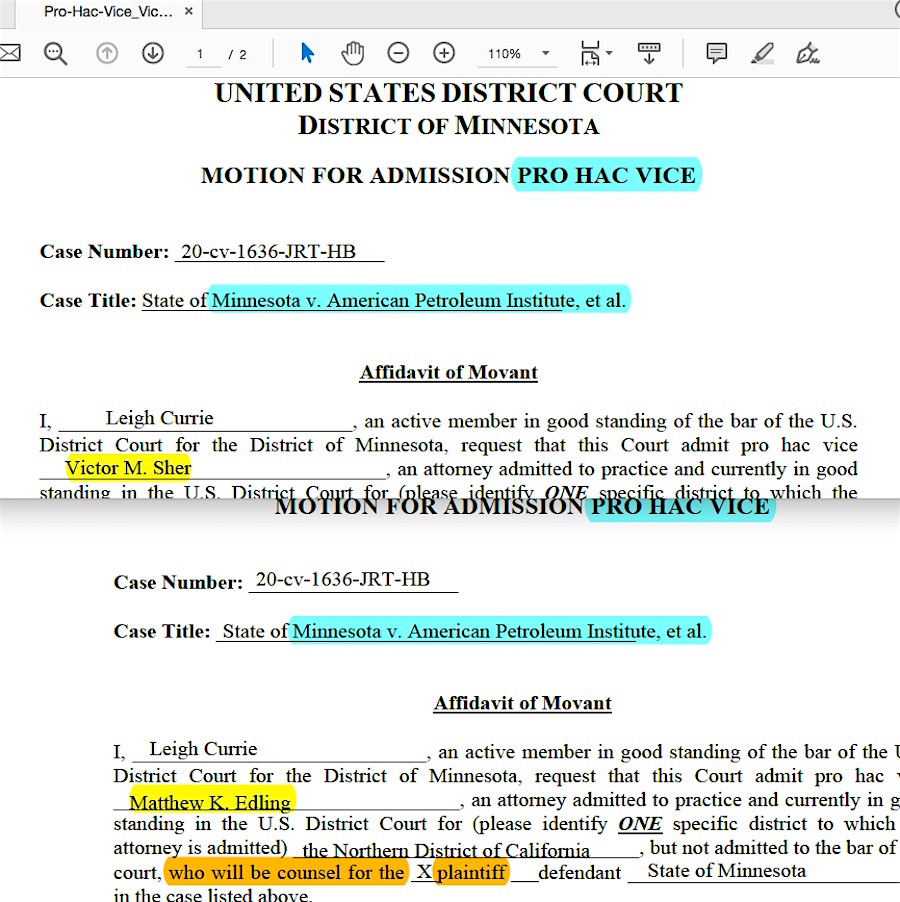 So now, rather than the question being one about the MN v API filing containing an accusatory section that looks just too close to a basic template checklist that could be applied to Sher Edling boilerplate lawsuits, e.g. their most recent Maui v Sunoco one, it should now be asked why the Minnesota AG office would have any need for the Sher Edling law firm’s assistance, if the overall lawsuit itself should be good enough as it is. All the MN AG’s office would need to do is follow the lead of Sher Edling’s progress in the other lawsuits, and the office could save taxpayers quite a bit of expense by not having any money ever go to the Sher Edling law firm from direct association.

That’s not the only question to ask about this situation. The new development in the handling of this lawsuit might be an excellent opportunity for the defendants in all of these “Exxon Knew”-style lawsuits to exploit the currently trendy far-left “intersectionality” term as a means of finding out what the true origins are for these lawsuits.

At least that’s something the incoming Sher Edling law firm staff won’t have to fix with the MN v API lawsuit. But now we’re right back to the original question: is it a pure coincidence that Keith Ellison’s AG office has that same wording about the James Black report in their filing, or did they shamelessly plagiarize it out of one of the earlier Sher Edling boilerplate lawsuit filings, or was this provided as a part of a lawsuit template submitted to the Minnesota AG’s office from undisclosed people?

If it is so plainly obvious an entire industry engaged in sinister efforts to promote deceptive, false information to the public to cover up for what the industry actually knew, shouldn’t there be zero ambiguity about the sources for the evidence, and shouldn’t the counter-efforts to expose the ‘sinister conspiracy’ be totally transparent, while also citing particular people who should be completely free from displaying any apparent massive conflicts of interest?

Just askin’. What happens to this lawsuit and all the other similar ones if objective reporters or the defendants’ lawyers start asking these questions?