“Unending,” because it seems there’s no limit to repetitions of the idea that policymakers fail to act against catastrophic man-caused global warming because its settled science is undermined by the fossil fuel industry’s orchestrated efforts which use shill scientists to spread disinformation. “Finite,” because it seems whenever this accusation is heard, it’s always connected to a limited number of people who attained the first major media traction for the accusation.

Take the case of the latest set of Colorado communities, for example, who are suing energy companies to recoup the costs of dealing with man-caused global warming. Within the court complaints is, once again, the unmistakable accusation:

Defendants promoted, marketed and sold fossil fuel products without disclosing … the climate-altering dangers that they knew – and have long known – were associated with their use.

In addition to concealing the known risks, Exxon and Suncor … directed, participated in, and benefited from efforts to misleadingly cast doubt about the causes and consequences of climate change, including: (1) making affirmative and misleading statements suggesting that continued and unabated fossil fuel use was safe (in spite of internal knowledge to the contrary); and (2) attacking climate science and scientists that tried to report truthfully about the dangers of climate change.

Unfortunate choice of words at the end there. “Attacking the science” in this context is an unsupportable talking point line traceable straight to Ross Gelbspan, as I’ve shown more than once.

Skeptic climate scientists don’t “attack” mainstream climate science, and they never have. What they do – and have done at length in one form since 2009 – is dispute in massive detail how the Intergovernmental Panel on Climate Change has failed to make the case that what little global warming we’ve seen over the last 150 years is primarily driven by human activity.

So the Colorado trio of lawsuits’ choice of words about ‘attacking science’ is just one tie-in to the finite number of people surrounding what I call ‘the epicenter’ of the smear of skeptic climate scientists.

Regarding one set of litigators who are making the accusation argument on behalf of the plaintiffs in the Colorado lawsuits, I already covered the EarthRights group’s connections to the ‘Skeptic-Trashing Enviro-Activist clique’ in my April 26, 2018 blog post’s second half.

As a Sierra Club alumnus, you’d think Bookbinder would suggested the inclusion of the same set of ‘leaked industry memos’ in the Colorado trio of lawsuits that are used to indict ‘crooked skeptic scientists’ in the San Mateo / Marin / Imperial Beach v. Chevron and Santa Cruz (plural) / Richmond v. Chevron sets of California global warming lawsuits. Why? Because way back in 1991, the New York Times credited the Sierra Club for providing the newspaper with that set of memos. But nowhere within the Sierra Club does anyone acknowledge that this turnover of critical documents ever happened … and it turns out the memos were not what they were portrayed to be this entire time. A simple question for professional journalists and investigators to ask: what does Bookbinder know about those situations?

That’s a small problem, however. A potentially larger one arises via just the simple internet search for the combination of “bookbinder gelbspan.” It yields a February, 2010 Mother Jones article quoting Bookbinder just two paragraphs above accusation input from Ross Gelbspan.

Innocuous at Bookbinder’s quote may seem in that Mother Jones article, peeling back the layers of the actual situation ultimately reveals connections among the ‘Skeptic-Trashing Enviro-Activist clique’ which lead right up to the present day.

Greenpeace recently obtained an older copy of Michaels’ curriculum vitae via a Freedom of Information Act request that shows the Western Fuels Association gave him a $63,000 grant in the early 1990s …

….. before quoting Gelbspan’s other bits about Dr Michaels’ financial contributions.

The clickable link in the 2010 Mother Jones article does indeed go to a late 2005 CV scan copy for Dr Michaels which shows the $63,000 amount, and perhaps Greenpeace really did undertake an FOIA request to receive it. But Mother Jones‘ account of Dr Michaels’ CV is, to put it mildly, not the whole truth about these so-called “revelations.”

Nearly ten years before Greenpeace’s supposed FOIA request, Ross Gelbspan personally received Dr Michaels’ CV when both were attending the May 1995 Minnesota Public Utilities Commission hearings where Gelbspan supposedly discovered the ‘industry bribery of skeptic climate scientists.’ In a guest comment contribution here, Dr Michaels described the “amusing scene” of Gelbspan’s joy upon receiving his CV. Likely as a result of this “scene,” John Passacantando’s “Greenpeace USA née Ozone Action” knew full well of Dr Michaels’ CV in 1996; his old Ozone Action website page about Dr Michaels has the same dollar amounts seen in the 2010 Mother Jones article, while also mentioning Gelbspan. One figure was apparently updated by Dr Michaels between 1995 and 2005 – the Edison Electric $15,000 seen in “Greenpeace USA née Ozone Action”’s scan of the CV he submitted to the 1995 Minnesota Public Utilities Commission hearings, compared to what Mother Jones quotes from his 2005 CV.

What did the focus of my blog post here, David Bookbinder, know about this Gelbspan/“Greenpeace USA née Ozone Action” mess and when did he know it, regarding his ‘outrage’ over what auto manufacturers were trying to shield about Dr Michaels’ funding sources? I’ll also leave that to professional journalists and investigators to resolve. Since Bookbinder is both currently a litigator in a set of global warming lawsuits against industries which supposedly paid ‘shill scientists’ to lie, and was involved in a similar way back in 2010 as the Mother Jones article points out, those are relevant questions to ask.

Matt Pawa’s name is unavoidable to miss among the defendant attorneys in the Green Mountain case right above Bookbinder’s in this page’s court case names collection (the same Pawa seen recently alongside Passacantando in recent plans to persecute fossil fuel companies, but that’s another story).

I detailed Pawa’s connection with the California version of this Vermont case in my March 30, 2018 blog post, regarding how he was demanding Association of International Automobile Manufacturers documents, which he ultimately later cited in his twin current CA / NYC global warming lawsuits without saying where those AIAM documents came from. One item I didn’t fully comprehend while researching references for that post was the ending statement within this webpage’s “AUTOMOBILE INDUSTRY: Cal. Wins Favorable Ruling in Air Law Case” subsection,

Judge Anthony W. Ishii of the U.S. District Court for the Eastern District of California ruled in favor of the state of California and environmental groups Environmental Defense, Natural Resources Defense Council and Sierra Club in a case brought by the automobile industry seeking to strike down the state’s greenhouse gas law. …

… The three environmental groups were represented in the California and Vermont cases by: Matt Pawa

One name I didn’t recognize while collecting the pair of references below (click image to enlarge) for my March 30, 2018 blog post about Pawa’s AIAM documents ‘discovery process’ — since the Colorado global warming lawsuits news hadn’t been announced yet — was David Bookbinder. 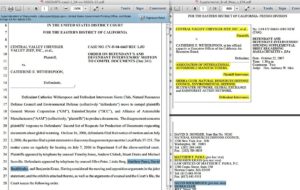 This is the way it is with the ‘crooked global warming skeptics’ accusation. It’s an endless loop of recycled accusation efforts, where the simple act to peel back the layers reveals how the group surrounding the heart of the accusation is all one big happy tiny little family. While seemingly ‘new names’ may pop up the way Bookbinder’s does, they never independently corroborate the ‘industry money buying lies’ notion, they all trace back to the same worthless accusation, and in many instances, they don’t tell the whole truth about what’s going on.

I’m no more than a guy on the street with limited resources and investigating power, but perhaps in laying out this groundwork, I offer open-minded journalists and other objective investigators / legal action people the “keys to the kingdom” when it comes finding more evidence to expose where the real disinformation conspiracy efforts are found in the political side of the global warming issue.