From an October 10, 1993 Newsweek magazine article by Sharon Begley, there is this first item:

… ecorevisionists have been filling books, op-ed pages and radio airwaves with attacks on what many scientists consider one of the most menacing global threats, and the one on the strongest scientific footing: depletion of the planet’s protective ozone layer by chlorofluorocarbons (CFCs). … Rush Limbaugh says that anyone who claims that CFCs destroy ozone is a “dunderhead alarmist.”

Time flies in the world of menacing global threats. Who does Rush Limbaugh call ‘alarmist’ these days? But there’s more in that old article. It goes on to state that the backlash concerned whether CFCs do actually deplete the ozone layer (over twenty years later, this is still a serious topic for debate), and whether it is harmful if they do. Then it detailed this exchange:

… ozone critic S. Fred Singer, of the Science and Environmental Policy Project, concedes, “Most, though not all, of the chlorine reaching the stratosphere is from CFCs.”

Even if the Antarctic ozone hole is caused by CFCs, say critics, that doesn’t mean anyone other than penguins has to worry. “The ozone hole is real and genuine,” says Singer, “but you cannot prove from existing data that global ozone depletion [due to CFCs] has occurred” anywhere outside Antarctica. … Atmospheric chemist F. Sherwood Rowland of the University of California, Irvine, calls that argument “disingenuous: the ozone changes over the Northern Hemisphere are outside the range of natural loss.”

For readers who are new to this blog, there is far more to that particular situation than just a disagreement over scientific pronouncements, as I detailed in my January 16, 2015 post.

But here’s what the article was ultimately aiming for:

Who cares if skeptics pummel ozone science? After all, the global pact calling for the phaseout of CFCs by 1996 is unlikely to change. (Ozone loss will reach 10 percent or more around the turn of the century, estimates physicist Michael Oppenheimer of the Environmental Defense Fund. Then, thanks to the CFC ban, it will recover over the next 100 to 150 years.) Yet by calling ozone science a sham, ideologues have a better chance of derailing the next environmental treaty: to control gases that trap heat in the atmosphere.

In October 1993, you could just as well say, “we’re going to ram through our ban on CFCs whether you like it or not.” But the can’t-miss thing there is the bullhorn call: “We need to shut down these critics, otherwise the next most menacing global threat might not have any success at being perceived as a threat.”

How do you do that? Try prompting a guy named Justin Lancaster to say Dr Singer committed a nasty act when he tricked Al Gore’s mentor and former college teacher Roger Revelle into recanting his long-held views on the harm of global warming. No need to stop there – try prompting a nationally recognized network TV journalist to say Dr Singer is a paid shill of the fossil fuel industry.

Oops, that worked out well. As detailed in a 2006 Marc Sheppard American Thinker article,

A libel suit was filed in April of 1993, prompted by Lancaster’s words, which also included suggestions that Singer’s purpose in listing Revelle as a co–author was “to undermine the pro–Revelle stance of [then] Sen. Gore.” It was revealed during the suit’s discovery period that Gore had called Lancaster shortly after learning of the New Republic article. Numerous links between Gore, Gore’s staff, and the actions of Lancaster were also discovered …

‘Concurrent with Mr. Lancaster’s attack on Mr. Singer, Mr. Gore himself led a similar effort to discredit the respected scientist. Mr. Gore reportedly contacted 60 Minutes and Nightline to do stories on Mr. Singer and other opponents of Mr. Gore’s environmental policies. The stories were designed to undermine the opposition by suggesting that only raving ideologues and corporate mouthpieces could challenge Mr. Gore’s green gospel. The strategy backfired. When Nightline did the story, it exposed the vice president’s machinations ….

[Ted Koppel:] ‘There is some irony in the fact that Vice President Gore, one of the most scientifically literate men to sit in the White House in this century, that he is resorting to political means to achieve what should ultimately be resolved on a purely scientific basis.’

Yet, even in the face of Gore’s blatant abuse of public office, the suit was, ultimately, settled. On 4/29/1994, Dr. Lancaster issued a statement in which he “fully and unequivocally” retracted his claims against Dr. Singer.

So what do you do in the face of twin wipeouts? Give up? No, you just ignore the Roger Revelle episode (who?) and abandon efforts to dazzle seasoned journalists you can’t actually control, but you still concentrate on refining that second angle, since everybody with a brain in their head hates somebody who is paid to lie.

A “Pulitzer-winning reporter” ought to do fine, he can say he was a believer in the global warming issue when he was tapped to co-author a March 1995 newspaper article, then a skeptic, then a firm believer once he discovered months later that skeptic climate scientists were part of an industry misinformation campaign. Just make sure Lancaster keeps his mouth shut about specific dates, and actions, and make sure no journalists ever question the core evidence this ‘Pulitzer winner’ discovered or question anything else associated with him, lest they report the whole effort is an accusation built on a foundation of sand.

In my January 15, 2016 blog post, I noted that Sharon Begley was one of the “repeaters” of Ross Gelbspan’s “reposition global warming as theory rather than fact” phrase, since her own Aug. 13, 2007 Newsweek “Global-Warming Deniers: A Well-Funded Machine” article repetition of it looked more or less like that. But from revisiting Begley’s article containing the repetition – click image below – the situation may be worthy of deeper examination, considering who appears in close proximity to the phrase and what that person says: 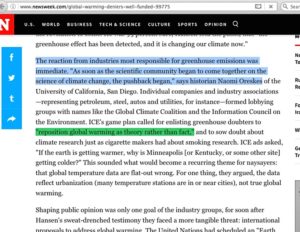 The reaction from industries most responsible for greenhouse emissions was immediate. “As soon as the scientific community began to come together on the science of climate change, the pushback began,” says historian Naomi Oreskes.

Back in late 2009, when I first told Dr Singer about the lack of substance behind narratives about ‘corrupt skeptic climate scientists’ and who those filtered back to, he replied, “If I can find a multi-millionaire willing to underwrite the legal expenses, I would sue them all: desmog, Gelbspan, Begley etc.” I still have the email.

At that time, I didn’t think much could be made of Sharon Begley’s amplification of the seemingly already virally repeated “reposition global warming” phrase in her 2007 Newsweek article, and I didn’t attach any significance to her bit about initial pushback against the idea of catastrophic man-caused global warming. But regarding the way she all but put out a clarion call for somebody to do something about potential pushback in 1993 over a matter she had no science expertise to judge, and considering how her 2007 article quoted Naomi Oreskes, one of the few people who actually saw those Western Fuels ICE documents firsthand, it might be worthwhile for other more intensive investigators to find out just what level of involvement Begley had in formulating and carrying out character assassination efforts to shut down Gore’s critics.