Using my online platform here to have a link I can place in my main Twitter account to show who blocks me from their Twitter accounts, for what reasons. Images are from most recent to oldest, click each to enlarge; my tweets which apparently triggered the blocks are under each one. Combine this with my dissections of Ross Gelbspan’s ‘industry-corrupted skeptic climate scientists’ accusation, and it becomes ever more obvious that supporters of the global warming issue do all they can to stifle fair, open debate. 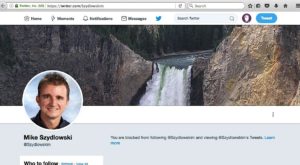 What crime prompted that? Either this one…

You feel a need to trash @HeartlandInst ‘s book because its chapter 1 eviscerates the 97% consensus, yes?

… or this reply to one of his supporters:

When you deliberately leave out half the science – the skeptic side – and validate this via a logical fallacy, it looks like agenda-pushing.

This was after I saw his tweet about a news story of his efforts to recycle a booklet from skeptics of man-caused global warming …. which has its first chapter thoroughly disputing the exact point he made in his tweet. Szydlowski is not especially famous, but his act of blocking me embodies one of the fatal faults crippling the Al Gore side of this issue. 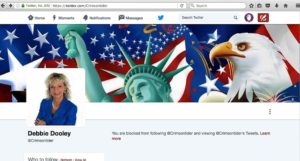 An excellent lesson in communication failure: repeat left-wing talking points on economics and assume your audience doesn’t catch them

I’d never heard of Debbie Dooley before, she is described as a founder of the Tea Party movement. But upon learning of her pro-solar position via a far-left enviro-activist site, I was perplexed that an alleged right-wing person was apparently regurgitating an utterly misperceived psychological premise from the far-left on how to persuade right-wingers into action against global warming. Ms Dooley’s comeback of an absolutely unsupportable far-left talking point accusation prompted me to write a May 11, 2017 blog post right here. No doubt her inability to support her tweet accusation in the subsequent Twitter joust I had with her sealed the deal on her decision to block me. 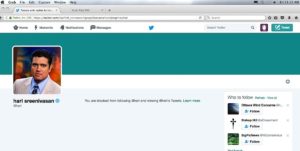 Could be this one did the trick …..

… it’s the NewsHour … fleeing from questions

… but it took quite a while to take effect. Hari Sreenivasan is currently one of the two most famous ‘celebrities’ blocking me, he is a senior correspondent for the PBS NewsHour and anchor of their Newshour Weekend program. Back in 2013, he admitted being a sucker to reply to me, and he later threatened to block me, but didn’t apparently follow through with that since he tweeted directly back to me a year later with this gem: “… good luck to you. Each time I engage, you make me regret it.” Between that date and December 2016, he blocked me. Notice how the climate scientist Andrew Dessler came to his defense right after me here. Dr Dessler’s name will come up again shortly below. 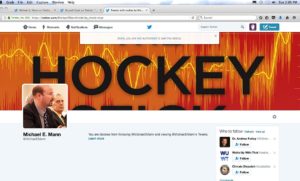 I was blocked within mere moments of tweeting this:

Dr Michael Mann, the internationally recognized climate scientist, is the second-most famous person blocking me from a Twitter account. I knew of William Briggs’ “Blocked by Mann Club” about a year earlier, but wasn’t tempted to try out the instant block feature until seeing Dr Mann’s tweet about a “fossil fuel group attacking” him. One could guess that either Dr Mann employs staffers to screen out such tweets, or his Twitter account has a screening program doing that.

Once again, pointing out a person who is unwilling to permit dissenting viewpoints is a crime:

Forbidding tough comments at your newest blog? Not to worry, here’s a screencapture.

A bigger readable version of the deleted comment I screencaptured is forever preserved at an archive version of her post that I created. (Interesting how she chose to immediately delete that one, but readily accepted the one by Lubos Motl which is still there to this day, albeit in an altered form minus the web link he long ago placed there). If my tweet about my deleted comment isn’t what prompted her to block me, this one probably caused it:

Oops, forgot to ask if you’d checked what the latest temperature in Resolute is.

The backstory here is that a Schatzie’s Earth May 2015 blog post concluded with a long list of prominent skeptics of man-caused global warming — with my name in that bunch — labeled as “murderers” of a pair of Arctic explorers. My tweet link for the nearest weather station no longer functions properly, but records show what the temperatures were in the area nearest to where the two explorers were lost during “unseasonably high temperatures.” It was below freezing. My heartfelt condolences to the families of the lost explorers, but who was actually possibly responsible for their deaths? Perhaps it was the global warming community which led these two to believe they didn’t need to pack much cold weather protection. 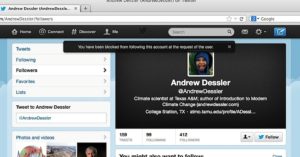 There’s that name again from the above “Hari Sreenivasan” section. Dr Dessler is an atmospheric scientist, and his block of me might have came from my reply to his praise of Hari Sreenivasan and the NewsHour’s exclusion of ‘flat Earth theorists’…

You are their new spokesperson on this matter? Question remains why THEY have not publicly elaborated on this

… or my subsequent tweet about the silliness of bringing up ‘flat earthers’ in the first place….

Everybody knows the F.E.S. sells gag t-shirts. Why AGW’ers continue to refer to it as a serious society is beyond me.

Whatever the case was, when I tried to reply straight to Dr Dessler’s Twitter account (which he temporarily permitted me to follow) a short time later that same day, I encountered the block screencaptured in the tweet I have here.

Who is this person? Perhaps the better question is what is this thing? If you go back the March 2013 timeline before and after this point, all I was doing was jousting with it over political angles of the global warming issue. Then Twitter user Maurizio Morabito (of BBC TwentyEightGate revelation fame) noted that it acted like a Twitterbot. When the other Twitter user in the conversation wondered about who the person was in its avatar photo, I did a small amount of photo image searching and then said,

Ya mmised [sic] in my 14-hr old tweet,  it’s Barton “Woody” Emanuel: https://www.facebook.com/woody.emanuel… (The earlier tweet was this one)

Notice throughout those several tweets how they go to “wood757,” while the responses are coming from a “TheWoodman2”. Try clicking on any link to “wood757” in the conversation and it takes you to an account created in November 2016 having zero tweets. Not only did “wood757” swap his/its headshot photo to the pastoral scene after I said who he was, the whole thing got a new Twitter account name. While I don’t have a screencapture of the “wood757” page in its original form, I did get a screencapture from the “twtrland” site’s profile of my tweets close to that time – the avatar photo of “wood757” is the first one on the left in that screencapture. It’s identical to the one I found at the above-noted “Woody Emanuel” Facebook page. What is the significance of that? Climatologist Dr Kerry Emanuel is also shown there. Facebook pages are public domain, but while respecting a degree of privacy in not disclosing another source of family details which is otherwise easily and publicly found on the internet, I can still absolutely establish that Woody Emanuel is Dr Kerry Emanuel’s brother. One more thing: the avatar photos that come up via my Twitter archive of those old 2013 tweets to “wood757” have the identical photo to the current “TheWoodman2” account, and he or it still blocks me.

My first ever time encountering Twitter account blockage (quicker responding screencapture of the link in that one here and the “error message I referred to here), by another internationally recognized climate scientist, Dr Katherine Hayhoe. Once more, what was my crime? Daring to suggest a scenario where she could conceivably lose a debate with a climate scientist from the skeptic side of the issue.

Is it plausible someone like Dr Lindzen would accept your debate requirement and still win it?

(One other note about Dr Hayhoe – when she implies skeptic climate scientists are ‘industry-paid crooks,’ citing Naomi Oreskes and James Hoggan, she reveals her own enslavement to an accusation ultimately coming from only one source: Ross Gelbspan.)

Who disputes blocking Twitter users for profanity or spectacularly irrelevant impolite material? That’s not the case here. While it’s funny how one person with nearly 20,000 tweets believes he advances his cause via fake utterances, the serious problem here is the appearance of a range of people from no-name environmentalists on up to prominent climate scientists and a major journalist feel compelled to block inconvenient questions and/or observations from an ordinary citizen.

The hallmark of any solid argument is its ability to be soundly defended against all criticisms and concerns. How solid is the idea of man-caused global warming, if our mind’s eye image of it is people fleeing from tough questions? 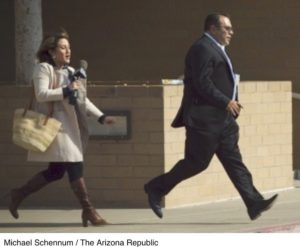