Now, let’s briefly examine one more time where the ‘crooked skeptics’ accusation was passed around.

Suggestions of conspiracy is also occasionally found among IPCC affiliated or sympathetic scientists, as in the following e-mail message circulated at a U.S. climate research lab: “Ironically, the people who are conducting these attacks and accuse the scientific community of belonging to some sort of ‘global conspiracy’ are themselves part of a conspiracy, funded by the oil and coal industry, to discredit any scientist or piece of evidence that supports the hypothesis that humans are causing a detectable change to global climate.”

This paragraph is from the obscure 1999 “Paranoia Within Reason: A Casebook on Conspiracy as Explanation” book’s Chapter 5, written by Myanna Lahsen. Let’s set it aside for now that her entire chapter could be dissected over the span of a thousand word+ blog post on its various claims and citations of Ross Gelbspan. What I will note is that this exact same paragraph also appears in Ms Lahsen’s Rice University PhD thesis, dated May 1998.

Who wrote that email? She doesn’t say. But perhaps a clue is seen within a passage further along in her PhD thesis, where she wrote in regard to “informal ties between atmospheric scientists and environmental organizations,”

… a former NCAR director now serves as trustee on the boards of several environmental non-governmental organizations; Stephen Schneider and other scientists published in a book on global warming edited and published by Greenpeace; and when controversies such as that around the IPCC chapter 8 erupt, the involved scientists often exchange Emails with representatives of environmental organizations such as Greenpeace, the Environmental Defense Fund, and Ozone Action.

And the footnote for that reads as follows:

Throughout my fieldwork, it also happened on numerous occasions that scientists familiar with me and my work forwarded email messages sent to them by these and other environmental organizations through listserves, messages addressing the politics of the environmental opposition and pointing out contrarians’ “political agendas,” ties with industry groups, and the financial benefits contrarians enjoyed through such interactions.

Listserves. The system I spoke of in my prior blog post here.

But there’s one more fun bit in Lahsen’s thesis, where she wrote about a July 29, 1996 St. Petersburg Times hit piece against Dr S. Fred Singer’s Leipzig Declaration, and included a footnote on where it came from and who it was sent to.

68 The article was forwarded to climate scientists via email by Ozone Action, an environmental activist organization.

Several are scientists whose daily bread has been buttered by industries that produce greenhouse gases. … Patrick Michaels, the global warming critic whose newsletter is financed by the Western Fuels Association. … Robert Balling, the Arizona State University climate scientist whose research has been supported by coal companies and Kuwait.

At that time, what was the only source for that accusation? Ozone Action’s “Ties that Blind” report. Balling here, with guess who in close proximity? And Michaels here – click image to enlarge – and, once again, with guess who and guess what “smoking gun evidence” right below him? 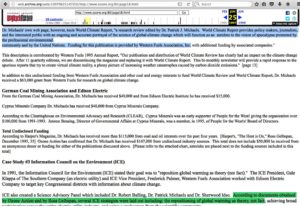 Given all that I’ve dug up on the origins of the ‘industry-corrupted skeptic climate scientists’ accusation, I’d call it a can’t-lose wager if you bet that the “e-mail message circulated at a U.S. climate research lab” which Myanna Lahsen referred to owes its “funded by the oil and coal industry” accusation against skeptic climate scientists to Gelbspan / Ozone Action.

If it was a big problem way back then for the “the scientific community” to be griping about being accused of “belonging to some sort of ‘global conspiracy’” (“the pot calling the kettle black“), it has grown exponentially since that time. Want to see what Lahsen’s 1998 quoted email about a fossil fuel industry conspiracy looks like today? Look no farther than Coral Davenport’s weeks old New York Times piece and its paragraph here:

With the help of a small army of oil-industry-funded academics like Wei-Hock Soon of Harvard Smithsonian and think tanks like the Competitive Enterprise Institute, they had been working to discredit academics and government climate change scientists. The lawyer and conservative activist Chris Horner, whose legal clients have included the coal industry, gathered documents through the Freedom of Information Act to try to embarrass and further undermine the climate change research.

Swap Drs Balling and Michaels for the current ‘enemy skeptic scientists/speakers du jour’ and then do the same for the Western Fuels name. What’s old is new again.

But what was Davenport’s first link to regarding Dr Willie Soon? It was another NYT article which I dissected to show how the ‘crooked skeptics’ accusation traces right back to Ozone Action at the time when Ross Gelbspan is seen in conjunction with them. Where does Davenport’s link about CEI lead to? A Washington Post article which contains the words “conspiracy theories” in its very first sentence and ends with a list of funders for a CEI dinner …… while providing zero evidence proving the donations were part of a pay-for-performance arrangement for fabricated lies, in a manner not one bit different than Ozone Action did two decades earlier.

What was worthless political accusation material for “IPCC affiliated or sympathetic scientists” back then is still worthless to the general reading public today. Journalists clearly are not doing their jobs when it comes to checking the basic veracity of the accusation, but now a bigger question needs to be asked:  How worried were the “IPCC affiliated or sympathetic scientists” about the soundness of their science assessments, if some in their midst felt a need to use baseless character assassination in order to persuade their fellow scientists to ignore material from scientist critics?