This is probably something we all can agree on: when a person tells a story or explains a particular situation that he or she is very familiar with, the narrative should always be consistent and never look like it is somebody else’s narrative which the storyteller is now claiming as their own. And no matter what the narrative is, it should answer questions or resolve any ambiguities, period, end of discussion. The narrative is the end-all thing, it should not ever prompt the audience to say, “how do you know this, where did you get that specific claim from?“

I had not noticed the situation I’ll be describing here before my June 30, 2022 blog post in which I made a somewhat cursory reference, via screencapture, to Ross Gelbspan’s declarative statement within his notorious “The Coal Industry’s “ICE” Campaign” website page:

One newspaper advertisement prepared by ICE was headlined: “If the earth is getting warmer, why is Minneapolis getting colder?” (In fact, data published in several scientific journals indicates the Minneapolis area actually warmed between 1 and 1.5 degrees C. in the last century.) 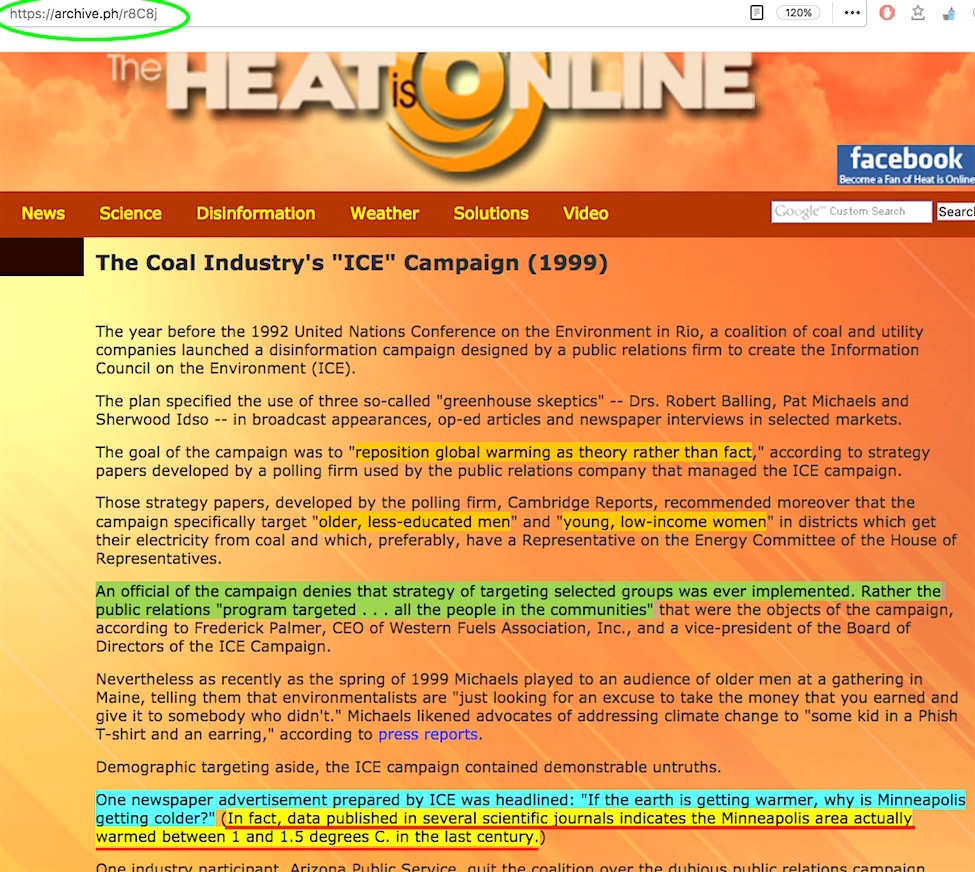 But upon re-examining that bit, the “where did you get that specific claim from?” may actually be a crippling problem for Gelbspan.

His single online page about the Western Fuels “Information Council on [sic – it’s for] the Environment” ad campaign, along with the essentially identical wording in his 1997 “The Heat is On” hardcover book / 1998 paperback, is what Gelbspan’s second career stems from — he’s a “Pulitzer winning journalist” (oh … oops) who exposed “the deliberate campaign by oil and coal interests teamed with conservative politicians, to confuse the public about global warming,” and he basically implies those leaked memo strategies/targeting goals/ICE advertisements are the smoking gun evidence of that disinformation campaign.

Problem is, the strategies/targeting goals he quotes were never even implemented. He even bizarrely corroborates that with the statement by Western Fuels CEO Fred Palmer within his online page I show above.

Where did Gelbspan get all that stuff on the ICE campaign? He never says in his books.

When apparently somehow working in conjunction with the old Ozone Action group back in 1996, neither he nor they said where they obtained all that alleged Western Fuels material.

She quoted the audience targeting directives that were never actually part of the ICE campaign, and said the “reposition global warming” memos were available in the American Meteorological Society archives. And after that, she thanked Anthony Socci for alerting her to all the material at AMS, which included Socci’s own “memo to the file” about the supposed error in the Minneapolis ICE newspaper ad:

… temperature data showed that the Minneapolis area had warmed 1.0–1.5 degrees in the twentieth century.

See that? Not simply somewhat close to what Gelbspan wrote. Nearly identical.

What’s the explanation for that? Sheer total coincidence? Remember, Gelbspan never said where he got those documents falsely attributed (with the exception of the “Minneapolis colder” newspaper ad) to Western Fuels, they were just “in his possession,” while Naomi Oreskes — despite citing Gelbspan’s books in her book chapter — clearly cited Anthony Socci for that particular “memo to the file” bit about Minnesota warming, specifically his “E-mail to self. July 7, 2000. Copy in American Meteorological Society Archives, Washington, D.C.” 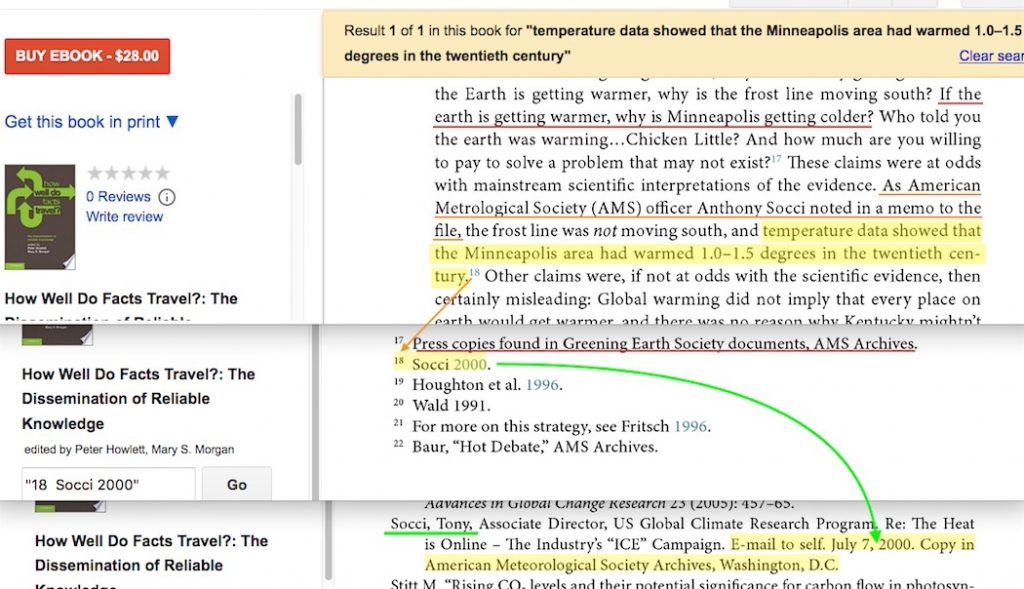 What does Oreskes’ line there even mean, though?? She emailed herself a note about this in 2000, three years before her first ventures as a “climate-change warrior”? Or does it mean for some reason upon seeing Ross Gelbspan’s 1997 book line about Minnesota warming by 1 to 1½ degrees, Anthony Socci was so enthralled with this assertion that he emailed himself regarding his action to place a “memo to the file” about this Minnesota warming …………… an archive file which happened to be at location that did not exist? 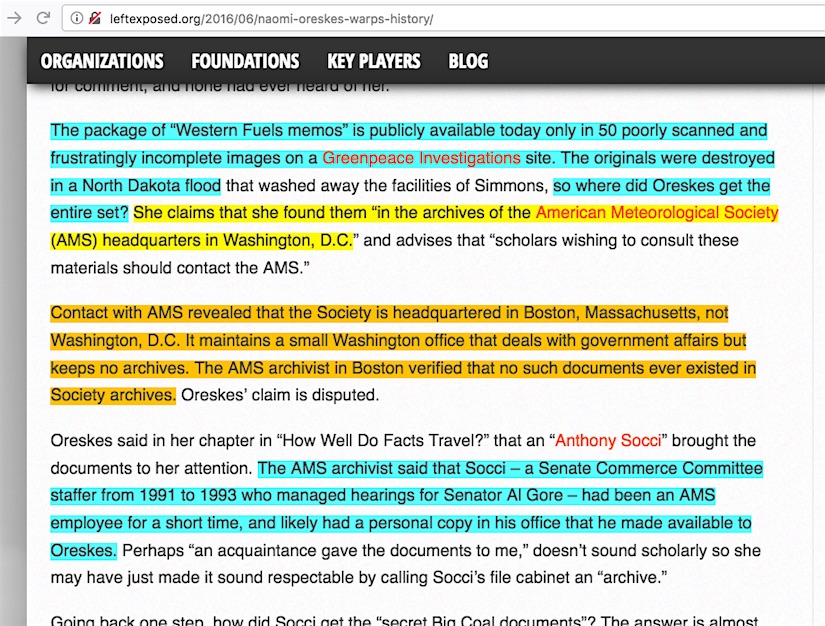 Why put any kind of note on a file that literally nobody would be able to look at?

But notice also what the late Ron Arnold said in his “Oreskes Warps History” LeftExposed website article about Socci, that he was “a Senate Commerce Committee staffer from 1991 to 1993 who managed hearings for Senator Al Gore.” It is not disputed that Socci was seen in conjunction with a 1992 Senate hearing in which Al Gore grilled climate scientist Dr Sherwood Idso over ties to the Western Fuels Association. The late Dr S Fred Singer was a bit more forceful about asserting Socci had a direct association with Al Gore, as does Dr Richard Lindzen.

Just askin,’ but I’m only a private citizen. The heat could be turned up considerably if law firms defending energy companies in myriad “Exxon Knew” lawsuits start asking these tough questions, or if Republican Senators and Representatives start asking them in GOP majority-led congressional investigations next year.

Add one more wrinkle to the whole mess: page 35 in the “Greenpeace USA neé Ozone Action” 50-page scans collection (identical PayUpPolluters’ 50-page PDF file copy, and Desmogblog’s copy, and almost identical to the Union of Concerned Scientists’ 49-page collection omitting the 1996-era Ozone Action cover page) does not match any other document in the pile in letter style / formatting. Page 35 is strictly concerned with temperature conditions in Minneapolis that contradict the ICE Minnesota “Frost Line” newspaper ad, notably one in particular from Minnesota State Climatologist Greg Spoden stating with regard to the city’s 1991-’92 temperature trend, “It certainly did not show cooling.”

Is that page Socci’s “memo to the file,” or just part of it?

Meanwhile, environmentalist writer David Helvarg claimed there were 53 pages to this document collection. Technically, the original Greenpeace USA neé Ozone Action” 50-page scans collection is only 45 pages because it contains duplicate page copies. Duplicates! And a cover page you would not describe as a “leaked internal ICE document.” This page 35 about Minnesota temperatures reduces the count by one more.

A bunch of pages are apparently missing, and for some reason, somebody inserted this one that contradicts only one of the actual ICE campaign newspaper ads.

Nothing – not one thing – lines up right in this accusation narrative that ‘leaked industry documents’ prove that fossil fuel executives paid shill climate science experts to undercut the ‘settled science’ of man-caused global warming, and its faults keep spiraling around the same core clique of promulgators in a highly suspect way.

On that note, one more bit of fun I offer at the expense of Ross Gelbspan, Naomi Oreskes, and the rest of the little clique promulgating the “skeptic climate scientists liars-for-hire” accusation: as I finalize the text of my blog posts before uploading them to GelbspanFiles, I like to have some upbeat background Youtube music loop-playing, and when I went to start Glenn Frey’s classic 1984 “The Heat is On,” for some odd reason I was first greeted with this image of current Arizona Trump-endorsed U.S. Senate candidate Blake Masters in a Youtube “pre-video advertisement” before my ad blocker application zapped it. I found it again, a Democratic Senatorial Campaign Committee ad that trashes the reputation candidate Masters. The irony is epic here — if Masters and other Republicans retake the U.S. House and Senate, the current House Oversight Committee “heat” against the fossil fuel industry could be turned 180° in the other direction against the core clique of “crooked skeptics” promulgators, and other similar Senate investigations could be launched against this group as well. 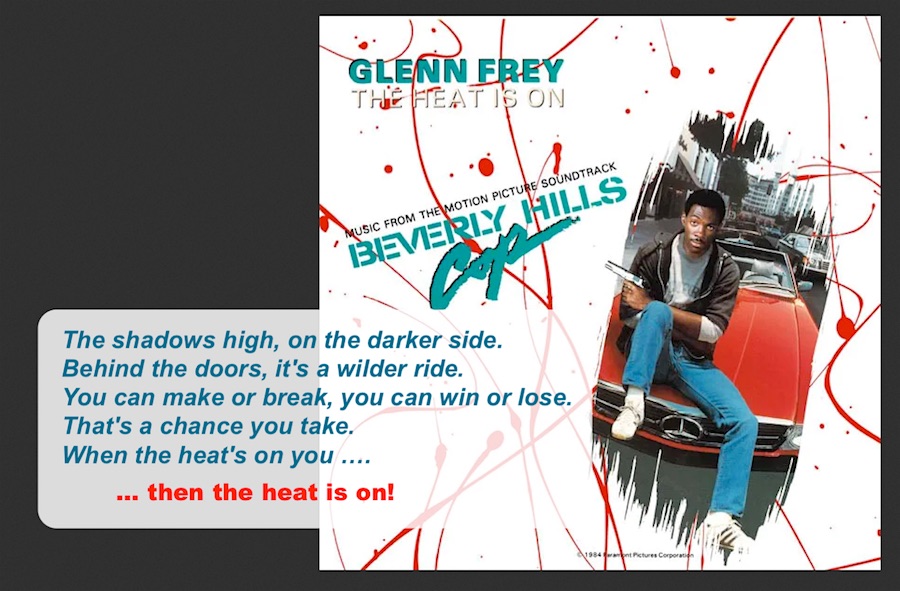