… it’s still old, when it comes to enviro-activists bending themselves into pretzel shapes trying to steer the public away from the idea that a complete science / political debate is needed on the global warming issue before drastic measures could or should not be taken. No doubt these activists anxiously hope they never have to answer for what they’ve done.

While assembling my May 23, 2022 blog post about a social media company banning ‘climate misinformation,’ I had to laugh when I ran across a law professor’s article suggesting that to protect democracy, statutes might need to be passed to restrict PLEMS — “persons with large electronic megaphones.” Not bullhorns in the literal sense (that would be monstrously ironic) but restrict individuals’ “electronic reach,” a.k.a. virtual megaphones.

The law professor’s idea itself is beyond ludicrous in any country embracing basic free speech rights, but at least minimally, his “megaphone” reference does fit the trendy effort in the recent couple of years of leftists saying there’s too much ‘misinformation / disinformation’ being spread via social media.

But back sometime in 2010 when I first ran across several prominent repetitions of the idea that an undeserving minority of climate scientists had ‘too big of a megaphone,’ the claim struck me as being incredibly bizarre in light of the other overriding outcry about them — ‘ignore skeptic scientists because they are paid by Big Oil to lie about the harm of burning fossil fuels.‘

For those who might forget — I actually did myself — I spelled out that strange conundrum 188 blog posts back, in my January 26, 2017 “The Big Megaphone Wipeout” post. In particular was the line from the old Ozone Action organization about their specific 1996 report which pertained to nothing but accusations about money corruption.

Note in my new screencapture here of that the old Ozone Action page, I also point to how the page contains both the American and British spellings of the work “skeptic / sceptic.” 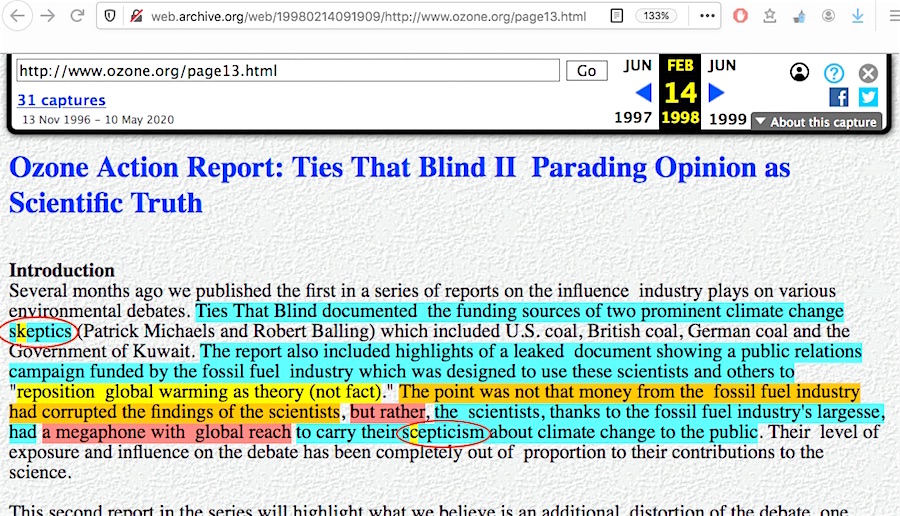 That’s weird on two different levels, which begs for questions on two separate levels: Inside the little dinky Ozone Action organization, was there some kind of international hand in their report? But then there is the bigger one: Rather than simply going entirely on the accusation about industry-bought corruption, was their bit about sc-sk-eptics having too big of a loudspeaker tantamount to them knowing their otherwise prevailing overall accusation of money corruption actually had no merit whatsoever?

Not noted in my January 26, 2017 blog post was another of Ozone Action’s pages about their “Ties that Blind III” report which said roughly the same thing, just minus the literal word “megaphone” and with the word “skeptics” all in agreement in ‘nationality.’

The first report included a case study of two prominent climate change skeptics and the significant levels of funding they received from the Government of Kuwait and the coal industry in the U.S., the U.K. and Germany. We did not make the point that the skeptics’ science was corrupted. We did make the point, however, that these skeptics had international media exposure and a platform paid for by the fossil fuel industry that is far out of proportion to the significance of their work. The report also included a description of a leaked document detailing a public relations industry campaign, featuring these same skeptics, designed to “reposition global warming as theory, not fact.“

Back when I wrote my “The Big Megaphone Wipeout” blog post five and a half years ago, the U.S. House was under Republican majority rule, but there was no sense of urgency to investigate any angle of the global warming issue. “Elections matter,” as the old saying goes, and in November 2018 the Republicans lost the majority, with one among myriad results was the House Oversight Committee’s ‘vendetta’ hearings aimed at vilifying the fossil fuel industry as they relied on very dubious sources and witnesses (plural!) for the claims that ‘industry-orchestrated disinformation campaigns’ existed.

This coming November’s midterm elections are looming ever larger as a ‘bloodbath’ for Democrats, where not only will the Biden Administration be held accountable, but other major investigations are already being planned. The one that I suggest is the political side of the global warming issue — more specifically, the character assassination efforts which have every appearance being designed to distract the public away from taking skeptic climate scientists seriously.

Old as the usage of the ‘big megaphone’ label is against skeptic climate scientists, from 1996, just that little detail alone is one to investigate, on whether the core clique of people accusing skeptic climate scientists of treachery knew all along that their ‘illicit funding’ smear of those skeptics never had any merit. It’s just one of multiple ‘the-walls-are-closing-in’ problems for that group.