…. and retain credibility derived from your self-imposed title of ‘expert about the history of climate disinformation’?

I’ve referred to Naomi “Merchants of Doubt” Oreskes’ 2008 “You Can Argue with the Facts” Powerpoint presentation slides numerous times here at GelbspanFiles, and in two previous blog posts, I linked to segments (as seen here and here) of a resurfaced-a-decade-later video copy of her giving that presentation (an old link that people such as Desmogblog’s James Hoggan cited for that video went offline quite a few years ago).

Back in my August 2010 guest post at the now-gone “Climate Change Fraud” blog, I mentioned Oreskes PPT slideshow, but as one dating from 2007. I forget where I saw at that time that her PPT presentation dated from 2007, but her latest Harvard resumé does indeed show how she presented it at least seven times in one form or another, dating as far back as December 13, 2007. The video I’ll be dissecting in Part 2 is the “Stanford University April 17, 2008” version.

But first, there is the situation surrounding that 2007 version which congressional investigators and law firms defending energy companies accused of spreading disinformation should consider examining as deeply as possible, not because of what Oreskes said within that version and subsequent versions, but instead what she said about her source for the documents she showed in those presentations.

I’ve requested to see the transcript of the 2007 version at the British Academy, but so far, no direct response from the Academy on that. This is potentially an important point because of a particular connecting detail we see in the old, now-offline British Academy page announcement for their December 2007 “Enquiry, Evidence and Facts: An Interdisciplinary Conference” conference. 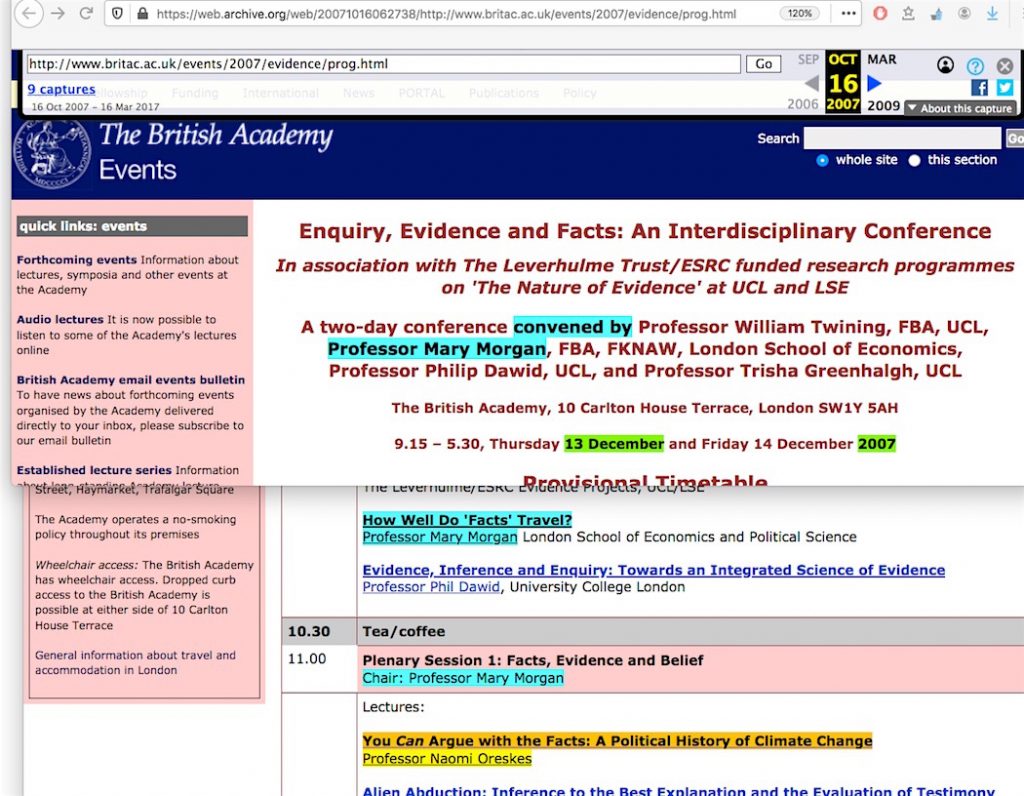 Long story very short, Professor Mary Morgan was one of the leaders of the London School of Economics and Political Science’s “How Well Do ‘Facts’ Travel?” project. It was a 2004-2010 exploration of how information – true or otherwise – gets disseminated around the world, which ultimately culminated in a book with that title (links: London School / Google Books / Amazon /  Cambridge U. word-searchable PDF file).

Somehow, Naomi Oreskes — who had no more fame to her name within the time frame for the “Fact Travel” project than her book on the ‘evolving consensus’ about plate tectonics science and her controversial Dec 2004 Science paper about ‘global warming science consensus’ — was invited to participate in this project. Her book chapter 5 contribution was not about the way Earth Science facts are spread, or on the way basic facts about global warming are seen; the chapter instead was entirely on the Western Fuels Association’s “Information Council for the Environment” (“ICE”) public relations campaign, where after just six paragraphs of introduction about the global warming issue, Oreskes claims, in errant reference to a never-used ICE name,

In 1991, in anticipation of the Rio meeting, the Western Fuels Association decided to act to protect their interests … They created … Informed Citizens for the Environment … to promote an alternative set of facts suggesting that increased atmospheric carbon dioxide (CO2) would be beneficial, not bad, for the environment and humanity.

And, two paragraphs later, Oreskes dutifully inserted Prof Morgan’s ‘Traveling Facts’ theme onto the alleged intentions of the Western Fuels Association (WFA). One page after that, Oreskes insinuated that a set of leaked ICE documents proved WFA’s goal was to “reposition global warming as theory (not fact)” by disinforming the public with ‘alternative facts’ about the issue …. and she said the “evidence” was preserved “in the archives of the American Meteorological Society (AMS).”

As I’ve illustrated numerous times in previous blog posts here, usually in connection with the name “Socci,” her claim about any documents in AMS Washington DC archives is fiction and her claim that WFA sought to “reposition” anything is fiction.

Unlike others — Ross Gelbspan / Ozone Action / John Passacantando / Greenwire / David Helvarg who “obtained” copies of the alleged full collection of ICE docs while never saying how they knew about those docs, Naomi Oreskes did say: Anthony Socci alerted her about them while also speaking of his own access to them – as an “AMS officer.”

Acknowledgments: … Thanks also … to Anthony Socci for bringing the Greening Earth Society documents to my attention … A Note on Sources: Many of the materials on the Greening Earth Society were found in the archives of the American Meteorological Society (AMS) headquarters in Washington, D.C. These archives consist simply of a set of filing cabinets, thus explaining the absence of the normally expected box-and-folder numbers for citations to these materials. Scholars wishing to consult these materials should contact the AMS.

Print and radio advertisements asked: … If the Earth is getting warmer, why is the frost line moving south? … Who told you the earth was warming…Chicken Little? … As American Metrological[sic] Society (AMS) officer Anthony Socci noted in a memo to the file, the frost line was not moving south …

One is left to wonder if Professor Mary Morgan, the London School, and the British Academy did any due diligence whatsoever about the veracity of Naomi Oreskes “facts.”

Plenty of other questions arise out of that situation:

Just askin.’ It’s something congressional investigators and law firms defending energy companies may end up asking about eventually, considering how hard Oreskes is currently trying to be a Friend to the Court in “Exxon Knew”-style global warming lawsuits despite how worthless her amicus brief claims are, and considering how much faith those lawsuits and a particular law firm place in her other “evidence” sourcing from her dubious chapter contribution to Prof Morgan’s “How Well Do ‘Facts’ Travel?” book.
————————————————————————
There’s more – Part 2: How many individual bits within Naomi Oreskes’2008 “You Can Argue with the Facts” 58 minute Powerpoint presentation appear to be pure disinformation? Let me count the ways ….