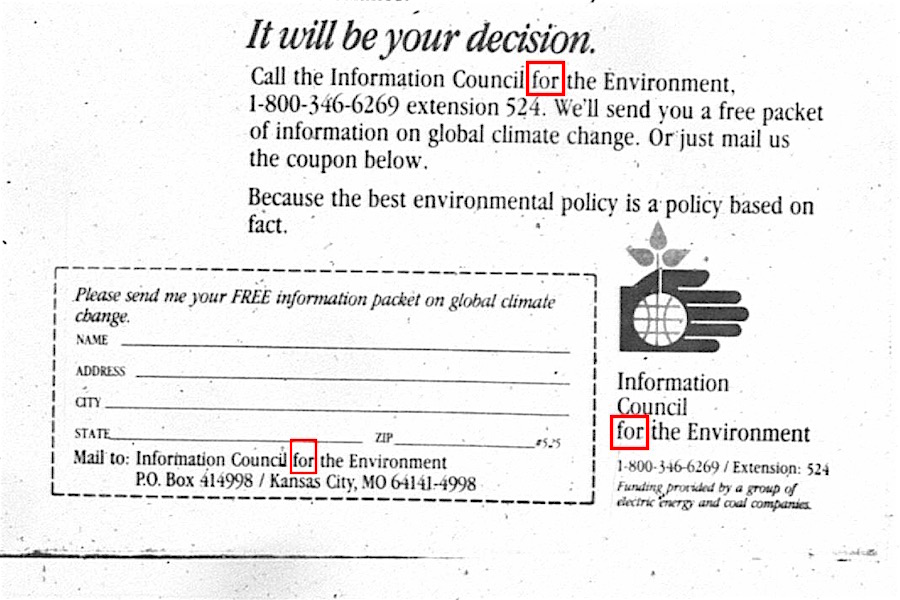 What does it tell you when the most prominent promulgators of the accusation about ‘fossil fuel industry executives colluding with skeptic climate scientists in disinformation campaigns’ — either people supposedly closest to very specific details of it, or entities which need to be above reproach when they repeat its specific details — proclaim that one glaring example of industry-orchestrated disinformation was the ‘misleading newspaper ads’ in the Western Fuels Association’s “Information Council on the Environment” public relations campaign?

Click on all of my screencapture links to see how the accusers are unable to maintain a consistent narrative about the Information Council for the Environment newspaper ads:

The problem widens out exponentially when anyone searches for the “on” version of that name.

Astute readers of GelbspanFiles have likely seen my older screencaptures of online pieces repeating the “Information Council on the Environment” version where I subtly highlighted the “on” word in some manner and included an additional screencapture of a scratchy closeup of one of the ICE campaign’s genuine newspaper ads which clearly shows the words “for” in two places. 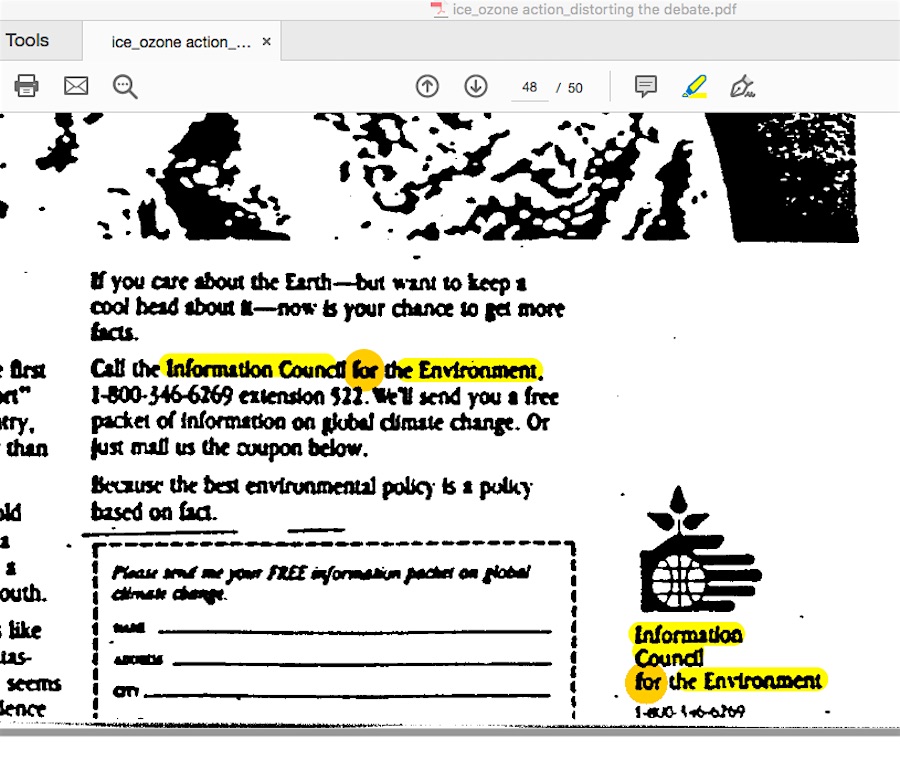 That lousy imagery isn’t simply all I had to prove the word “on” was never in that name. Those lousy scans are all that every accuser has ever had when it comes to the “full-page newspaper ads*” being — as the most recent Anne Arundel County v BP global warming lawsuit insinuates — evidence of a “national climate change science denial campaign” operating under a directive to “reposition global warming as theory rather than fact.” *(or pamphlets, if you are a Miami New Times reader, or magazine ads, if you were a 1996 National Resources Defense Council magazine reader)

Doesn’t matter where you go in the internet to see that particular accusation, for example “Fossil Free MIT”‘s divestment diatribe, or Naomi Oreskes’ notorious 2008 Powerpoint Presentation, or James Hoggan’s Desmogblog page on that, the only thing they have are multigeneration-degraded photocopies sourcing from Greenpeace, circa 2007, which actually date from the old Ozone Action group circa 1996.

The most rock-bottom question needs to be asked here: why do they rely on such horrible, cropped degraded photocopy scans from “Greenpeace USA née Ozone Action” when either the newspaper company itself or libraries can provide first-generation, full context, clear copies in order to irrefutably established what was seen in print and what was not?

Accepting a single source like that is a self-inflicted trap. How well equipped are any one of those accusers if they are blindsided with the question “Full-page ads?? How do you prove they weren’t half page ones or tiny little things that readers glanced right past? Plus, how do you prove the public relations people didn’t also get ads printed in the newspaper that say ‘Informed Citizens for the Environment,’ like the Climate Investigations Center shows and like Greenpeace shows?”

How am I now able to say with authority that there really were four ads placed in the Fargo, North Dakota The Forum newspaper in mid- late May 1991 that were full-page ads, none of which had the word “on” in the name of the public relations campaign, and none were the “Chicken Little” version, and none had the name “Informed Citizens for the Environment”? The Head of Reference Services at the North Dakota State Archives searched through their original editions of the newspaper for the time period seen in Greenpeace’s scans of the genuine ICE campaign scheduling, copied the four ads, and emailed the file copies to me. No other versions were found.

Below are those first-generation scans, first as ‘thumbnail’ views for quick reference, then as unaltered resizable PDF files which show the newspaper name and page number at the lower left on each page. 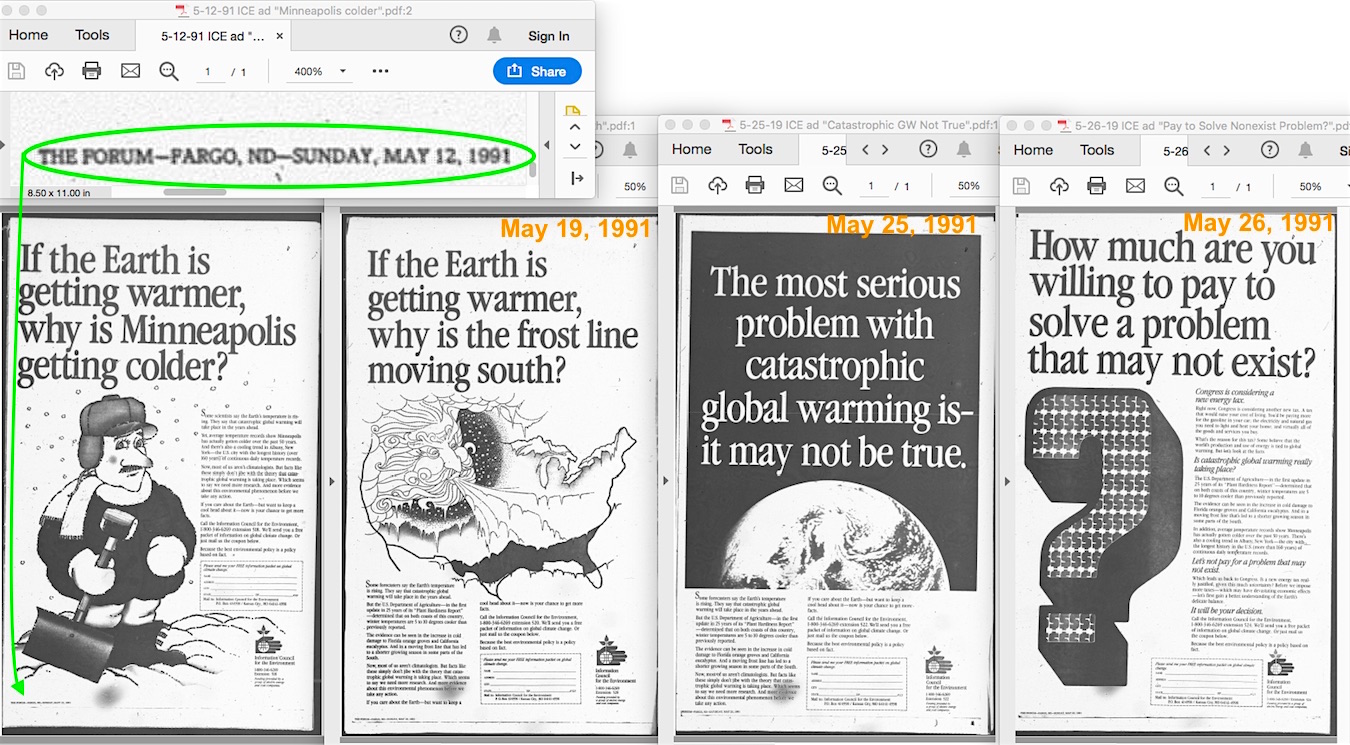 ————————————————————————
See 1st-gen scan copies of the ads as they appeared full context in the Flagstaff Arizona Daily Sun and the Bowling Green Daily News. Meanwhile, continue on to Part 2 — remember those 2007-era Greenpeace scans of the alleged ICE Campaign docs, with just 3 ICE newspaper ads that ends at page 50? Environmental activist/journalist David Helvarg said in the summer of 1996 that the leaked docs collection was 53 pages, and he likely was not counting Greenpeace’s page 1 Ozone Action Summary or Greenpeace’s three – no, make that four clearly duplicated scan pages there. 53 pages vs now 45. What’s missing? And who is it in the recent few years is inadvertently indicating online that they have the larger collection of leaked docs that they are being less than transparent about? And why would they apparently be showing a pre-production version of an ICE newspaper ad instead of a scan of the actual print ad?