Naomi Oreskes’ appearance at a 10/23/19 House hearing on the topic of “the oil industry’s climate denial campaign” wasn’t a one-time event. She reappeared six days later at a Senate “hearing,” where her Prepared Written Testimony contained the identical blunders I detailed in Part 1 of this two-part blog post. Unlike the House hearing, she and the others at this “hearing” offered truly bizarre and comically self-damaging statements without fear of anyone questioning them.

First, a quick glance at Oreskes’ repeat of the blunders in her Prepared Written Testimony (it’s so much of a copy ‘n paste, she forgot to change the date). 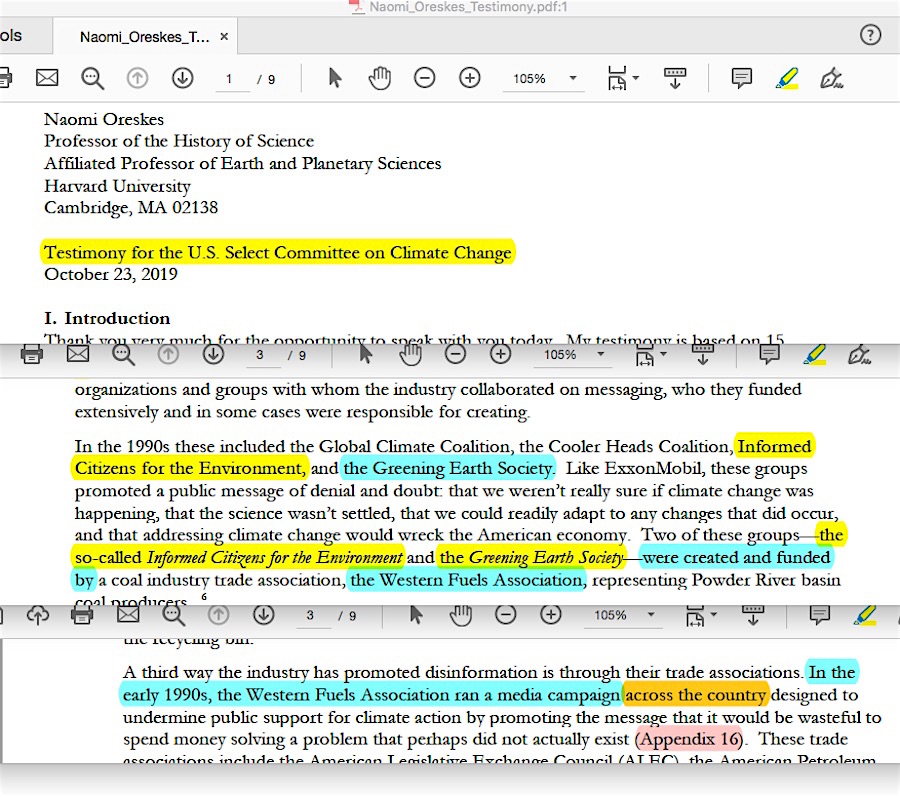 Regarding her odd reference to an unused name and unwise references to the Western Fuels Association, please see Part 1 on how these were errors begging for deeper examination. Quite unwise of her to draw more attention to them at this Senate Dark Money and Climate Change “hearing.”

I put “hearing” in quote marks because this wasn’t a standard Senate committee hearing. It’s a “Special Group” with no GOP Senators members, thus there’s no expectation that unsupportable statements or the credibility of their ‘expert witnesses’ will be objectively questioned. Give this “group” credit for having the same mission as the United Nation’s Intergovernmental Panel on Climate change about a foregone conclusion that man-caused global warming needs to be mitigated.

These sort of gatherings are sometimes called “kangaroo courts.” So, when Naomi Oreskes said (45:24 point in this Special Group discussion) …..

I came to this issue because I wrote a book that was partly about the relationship between climate change denial and the tobacco industry ….

….. nobody at the Senate Special Group discussion asked what prompted her to write “Merchants of Doubt” in the first place. The statement is as ridiculous as Al Gore saying he got into the issue because he made a movie about it.

I discovered this connection by accident. I didn’t set out to write a book about tobacco. But when [co-author] Erik Conway and I started looking into Fred Seitz  …

That’s weird. Oreskes’ far more routinely repeated tale of what brought her into the global warming issue (e.g. this retelling weeks earlier in an interview about her newest book) is how she: 1) wrote a paper on the 100% consensus on global warming science; 2) was attacked about her paper’s conclusion; 3) and was told at a subsequent conference event who her primary attacker was by Erik Conway. As I’ve already detailed, this specific conference event took place at least five months prior to any attacks she received.

Imagine the fallout at the next fully attended Congressional hearing, or at a global warming lawsuit courtroom hearing, if she’s required — under oath — to defend her standard tale of what prompted her entry into the issue.

Not helping her insinuations at the Senate Special Group discussion about the existence of an oil industry disinformation campaign was the following from Senator Sheldon Whitehouse (3:20 point). He oddly illustrated a far larger problem besieging those who assert that conspiracy notion:

…. What instructions did fossil fuel companies give to front groups about opposing laws and regulations and did that break the laws for non-profit tax-exempt status? We don’t know. How exactly did the fossil fuel industry deploy its front groups and trade associations to purposefully spread disinformation about climate science? We don’t know. …. None of this information is privileged. All of it is amenable to congressional subpoena.  ….

Not helping the situation at all, Prof. Justin Farrell offered the following response to Oreskes’ point on ‘inoculating the public’ against fossil fuel industry disinformation, at the 41:05 point:

… Even inoculation requires that we know who the bad actors are, right? That’s where we need better data, and that’s where we need more transparency, and access to information, as Senator Whitehouse was saying from the opening, so there is excitement around public inoculation theory, but again I think it would really help if we knew who to inoculate against.

Oreskes herself inadvertently contributed to this problem, 15:16 point:

Exxonmobil is just one part of a large disinformation landscape. Because of loopholes in our laws, particularly those that permit dark money contributions, we lack basic information about who is behind much of this. Who coordinates these talking points? Who comes up with these misleading claims?

Twice. The second time at the 53:51 point, responding to Senator Schatz’s question about when fossil fuel companies realized their ‘climate denial’ was untenable:

… we don’t have access, as Justin has been saying, we don’t have access to the internal documents. I mean, I was able to write the book I wrote really because of the work of the state Attorneys General that exposed the tobacco industry’s malfeasance, we had a huge rich documentary record on that. We don’t know as much about what’s going on inside Exxonmobil or Chevron headquarters today …

Senator Whitehouse further reinforced at the what the overall problem is, while opining how the “Citizens United” Supreme Court decision resulted in new dark money contributions to political candidates. 59:15 point:

He concluded that such “threats” are “going to be really hard to dig out.”

In other words, “trust us, we know these guys are guilty, and we’ll prove it when we find the evidence.”

Solidifying that problem at the end of the “hearing,” Congressional Scholar witness Morton Rosenberg speculated at the 1:06:26 point on what Congressional investigation might finally prompt:

Let me just add one thing about persistence. Your committee and other committees continue to be persistent … and what’s happening now with the impeachment pressures, it will be people who will open up, for those doors, and come in, whistle blower types that will come and say, “yes, this is what I heard, here is what we did, here’s the paper, here’s the conversation.

12:22 point of this Senate Special Group discussion, from Naomi Oreskes:

The role of third party allies was on full display last week in hearings of the House Committee on Oversight, where Republican members invited as a witness the founder and president of Energy 45. Energy 45 is part a group known as the CO2Coalition. They illustrate a strategy I call “zombie denialism,” in which old players and arguments reappear in new forms. … a leader in climate change disinformation was the George C. Marshall Institute. The Institute closed in 2015, only to re-emerge a few years later as the CO2Coalition. …

The executive director of the CO2Coalition tells me that is not an accurate statement.

But what she said is pure psychological projection of what her side of the issue has been doing from 1991 right up to the present time, with their regurgitations of ye olde “reposition global warming as theory rather than fact” leaked memos as evidence of a fossil fuel industry disinformation efforts. Oreskes is a somewhat old “player” in that regurgitation list at the #28 spot here, but she’s essentially in ‘new form’ at the #36 spot, and technically she may be shifting into another ‘new form’ in this exact Senate Special Group discussion when she said (38:15 point, regarding the history of fossil fuel industry disinformation efforts):

We know from their own industry strategy documents that the whole point of disinformation was to confuse the American people and undermine support for action, and we have a great deal of documentary evidence on this.

As in the never-used strategy so many accusers wrongly attribute to Western Fuels’ tiny “ICE” PR campaign, the one she’s misidentified two times in a row in her Prepared Written Testimonies under its never-used name? 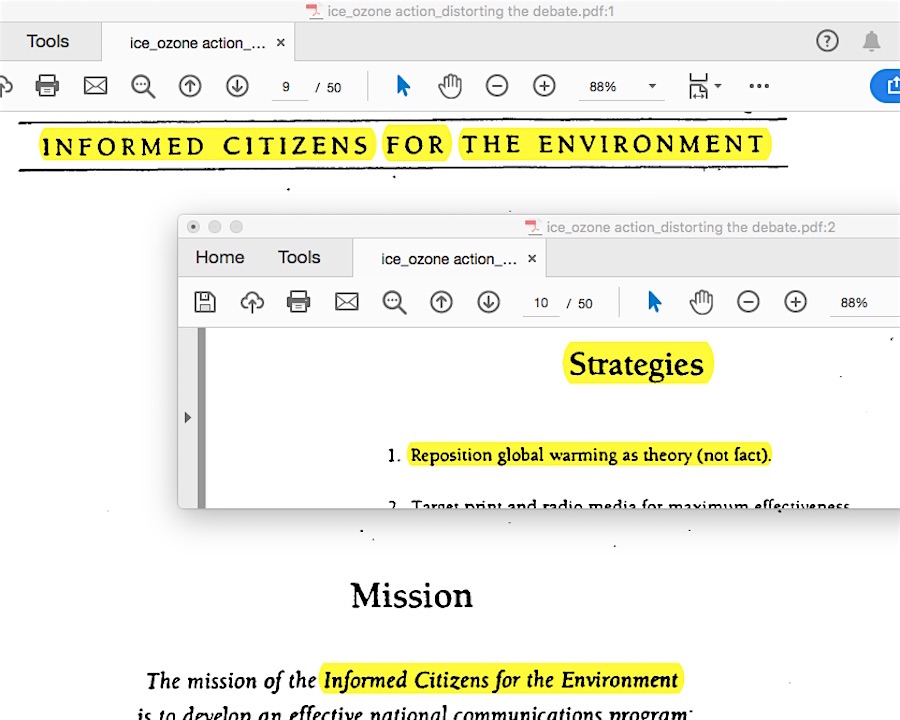 And wait a moment, didn’t she and the others say they didn’t have access to documents that expose the specific workings behind the alleged disinformation efforts?

Good thing there wasn’t a GOP Senate member at this discussion to ask her which “industry strategy documents” she was talking about.

What do you do when you know a group is guilty but can’t yet prove it after two decades? You go on a fishing expedition, like Oreskes suggests (15:40 point):

The tobacco industry was prosecuted by the U.S. Department of Justice under the RICO statutes, in part because of the ways in which individual companies coordinated with each other and with third party allies to present false information to consumers. I believe it is time for Congress to investigate the fossil fuel network, as Congress and the Department of Justice investigated the Tobacco network.

She suggested this again, for good measure, at the above-noted “‘Merchants of Doubt’ author advises Congress on Big Oil” E&E News article:

E&E: Where should the Oversight and Reform Committee take its investigation next? Which witnesses should it call?

Oreskes: I think it’s incredibly important for the committee to investigate not only the fossil fuel industry itself but also the network of third-party allies that have been involved with this. … I remember watching the tobacco executives testify on TV, and it was a sea-change moment. It really exposed to the American people just how incredibly cynical these people are.

“Cynical?” Who coordinates these talking points? 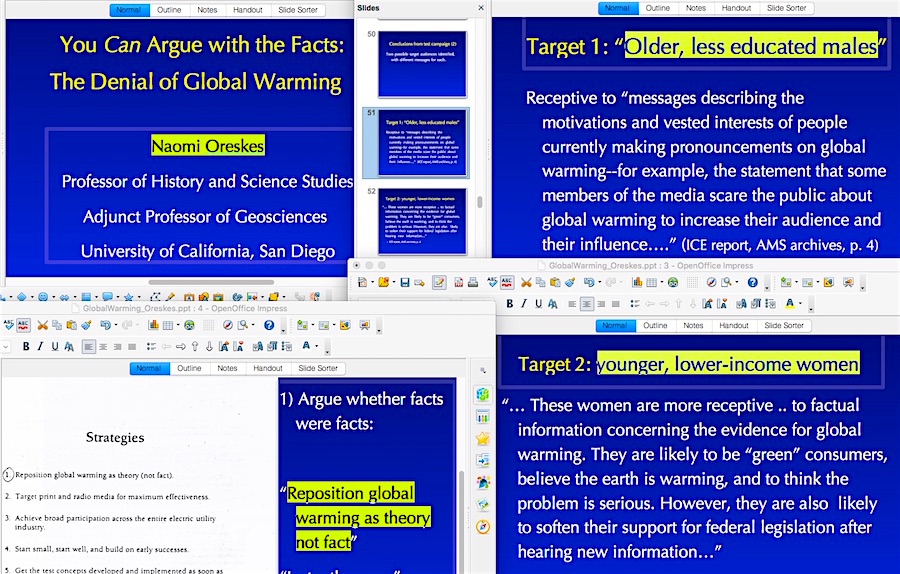 … while channeling Al Gore on the word “cynical” … 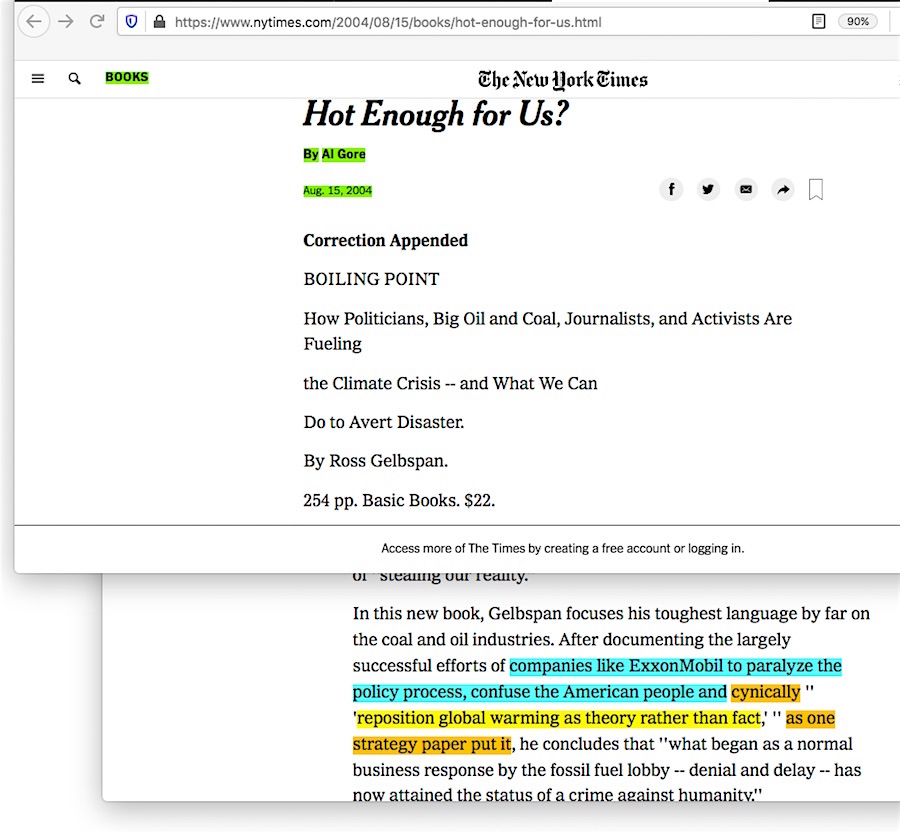 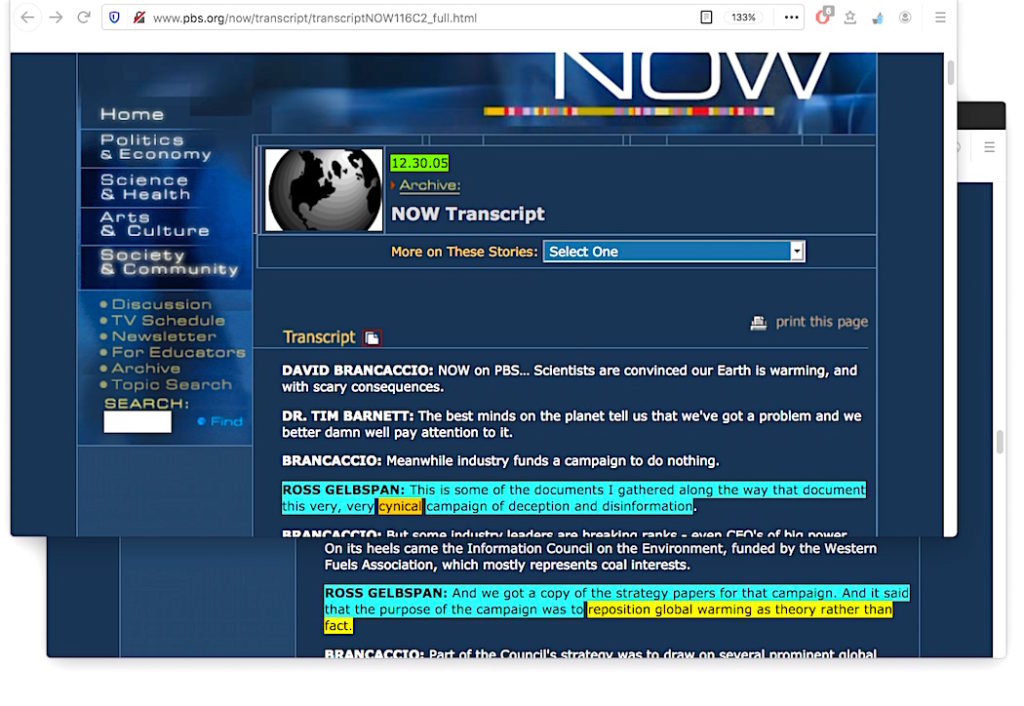 Congress should investigate disinformation campaigns? Naomi Oreskes should be more careful for what she wishes for. That might backfire to such an extent that she’ll wish she hadn’t thrown away a science career to become a ‘historian of science.’