It’s a small thing — I’ve already suggested (e.g. here and here) the inconsistencies between Ross Gelbspan and other people regarding the exact start date for his so-called ‘revelation of corporate-corrupted skeptic climate scientists’ are worthy of deeper questioning.

Throw another gasoline-soaked problem into that dumpster fire.

Honestly, I hadn’t picked up the significance of the arguably contradictory problem I’m covering in this post until I was finishing my July 11, 2019 post, with its specific bit highlighting the way Ross Gelbspan changed his tune on his narrative about the first-time reporting of the (*ahem* for emphasis: worthless) memos falsely attributed to the Western Fuels Association’s Information Council for the Environment (ICE) public relations campaign, which supposedly had the strategy goal to “reposition global warming as theory rather than fact” in the public eye by targeting “older, less educated males and younger, lower-income women.”

Gelbspan has offered basically two narratives about the way they came into public view:

At the time of what?? As I’ve detailed in my May 9, 2014 post, there’s little doubt about Gelbspan’s setup prior to that claim, regarding his self-described timeline for his foray into examining the ‘industry-funded / orchestrated lies from skeptic climate scientists’:

Report, he did, not at any news organization as an employed or otherwise freelance reporter, but instead in his own November 1995 Harper’s Magazine article, and subsequently in his own 1997 “The Heat is On” book ….. where, at the bottom of page 34 and continuing on to page 35, after having spelled out the allegedly Western Fuels ICE memo’s strategy/targeting goals, he unmistakably said,

The ICE campaign had barely gathered momentum when it was exposed by environmentalists, who provided information about it to the media. Several embarrassing news articles led to the ICE’s demise.

Gelbspan’s “The Heat is Online” website elaborates just a little more, erroneously, regarding two of the media publications:

The ICE program was discontinued when it was exposed by a trade paper, The Energy Daily, as well as by The National Journal, The Arizona Republic and The New York Times.

He was referring to Mary O’Driscoll’s June 24, 1991 The Energy Daily article titled “Greenhouse ads target ‘low income’ women, ‘less educated’ men” (corroborated by an Eco Geneva newsletter dated June 25, 1991 containing extracts both from the ‘leaked memos’ themselves, and from her article; and to a Greenwire (which was absorbed years later by The National Journal) June 20, 1991 report; and to a May 24, 1991 Arizona Daily Sun article which only referred generally to the Western Fuels ICE campaign; and finally to the July 8, 1991 NYT article about the memos being provided to the newspaper by the Sierra Club

See the problem? Re-read his words from Mother Jones: 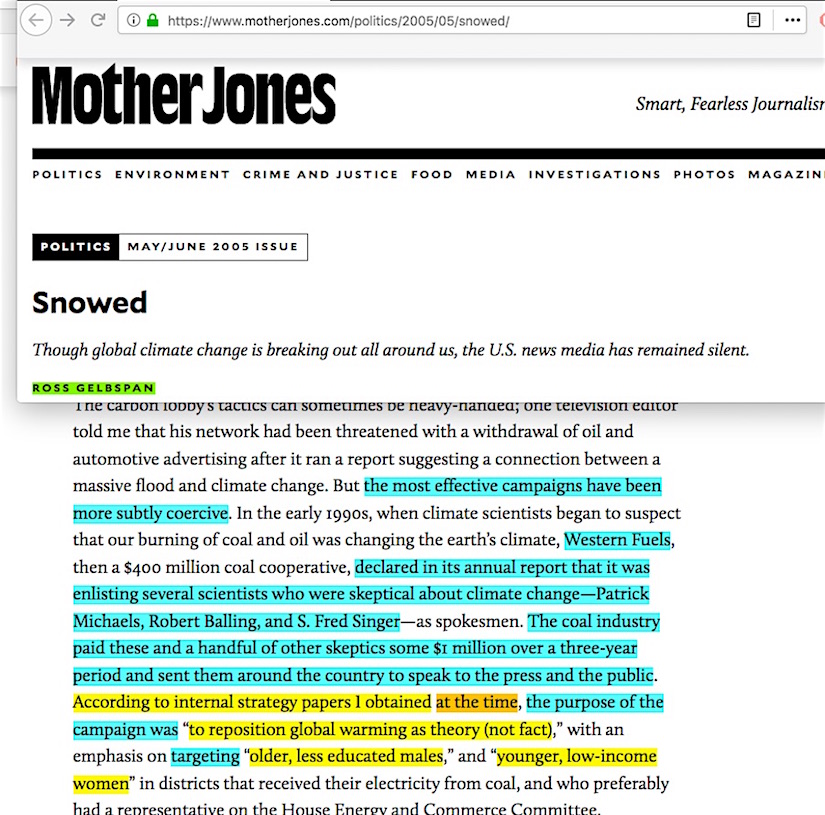 Western Fuels, then a $400 million coal cooperative, declared in its annual report that it was enlisting several scientists who were skeptical about climate change—Patrick Michaels, Robert Balling, and S. Fred Singer—as spokesmen. The coal industry paid these and a handful of other skeptics some $1 million over a three-year period and sent them around the country to speak to the press and the public. According to internal strategy papers I obtained at the time, the purpose of the campaign was “to reposition global warming as theory (not fact)” …

If Gelbspan had no knowledge prior to the Spring of 1995 about skeptic climate scientists being paid coal industry money, how could he possibly receive the leaked memos at the time of the demise of the ICE campaign in 1991? Even if we allow some quite generous leeway about the skeptics being ‘sent around the country over a three-year period’ – 1992, 1993, 1994 – that still places Gelbspan’s receipt of the memos upwards of 6 months or more (worse for ’91-’92-’93) prior to his claim about being alerted to the ‘industry funding’ of skeptic climate scientists. That earlier receipt time essentially corroborates other people’s assertions about Gelbspan beginning his examination of this situation at least a year prior to his own publicly stated start of it.

Borrowing once again from the courtroom drama movie “A Few Good Men” (see the end of my December 22, 2015 post on a separate ‘crooked skeptics’ accusation narrative similarly going off the rails) to illustrate the point here ……..

Captain Ross: Private, the week of 2 September, the switch log has you down at post 39 until 16:00, is that correct?
Private Downey: “I’m sure it is, sir, they keep that log pretty good.
Capt. Ross: How far is it from Post 39 to the Windward barracks?
Pfc Downey: Oh, it’s a ways, sir. It’s a hike.
…
Capt. Ross: You ever had to walk it?
Pfc Downey: Yes, sir, that day, sir. Friday. … The pickup private got a flat tire, sir, right at 39 … we had to double time it back to the barracks.
Capt. Ross: And if it’s 10 or 15 minutes by jeep, I’m guessing it must be a good an hour by foot, am I right?
Pfc Downey: Pick-up and me did it in 45 flat, sir.
Capt. Ross: Not bad. Now, you’ve said that your assault on Private Santiago was a result of an order that Lieutenant Kendrick gave you in your barracks room at 16:20, am I right?
Pfc Downey: Yes, sir.
Capt. Ross: But you just said you didn’t get back to the Windward barracks until 16:45.
Pfc Downey: Sir?
Capt. Ross: Well, if you didn’t make it back to the barracks until 16:45, how could you be in your room at 16:20?

…….. if your goal is to maintain credibility regarding your presentation of an overall storyline, none of the players involved in it can can plow into their own self-created “wait…what?” narrative derailments which cause people to wonder if the whole story is a fabrication.

Why would there be any need to for a person to apparently fabricate a story about the way he or she entered into an examination of corrupt activity? Perhaps because a “Plan A” attack on skeptic climate scientists went bad and the ‘attacker’ had to be cut loose, thus the new attackers could never disclose that they were ordered to carry out the attack, one which otherwise could destroy the legacy of their commander because it violates one of the most basic moral codes of conduct there is.