What’s one way to spread outright propaganda on the climate issue? Offer a statement just like the title above to the larger public who may not be aware that a once-highly lauded magazine has been turned into a vehicle of biased information about global warming. And to make doubly sure a particular political angle of the issue is put out, place a person formerly associated with an environmental propagandist organization into that magazine as its “Chief of Content, Communications and Public Affairs.”

First, my post’s grammatically corrected title comes from a June 26, 2019 online guide on “How To Write An Essay On Global Warming That Will Impress,” at a website/online magazine which claims to “help grow businesses that balance the needs of the planet, its people and prosperity .. without prejudice.” The guide not only featured the National Geographic magazine no later than the second sentence as an authoritative source, but also again paragraphs later as a go-to site among other “resource” to use for essay writing. 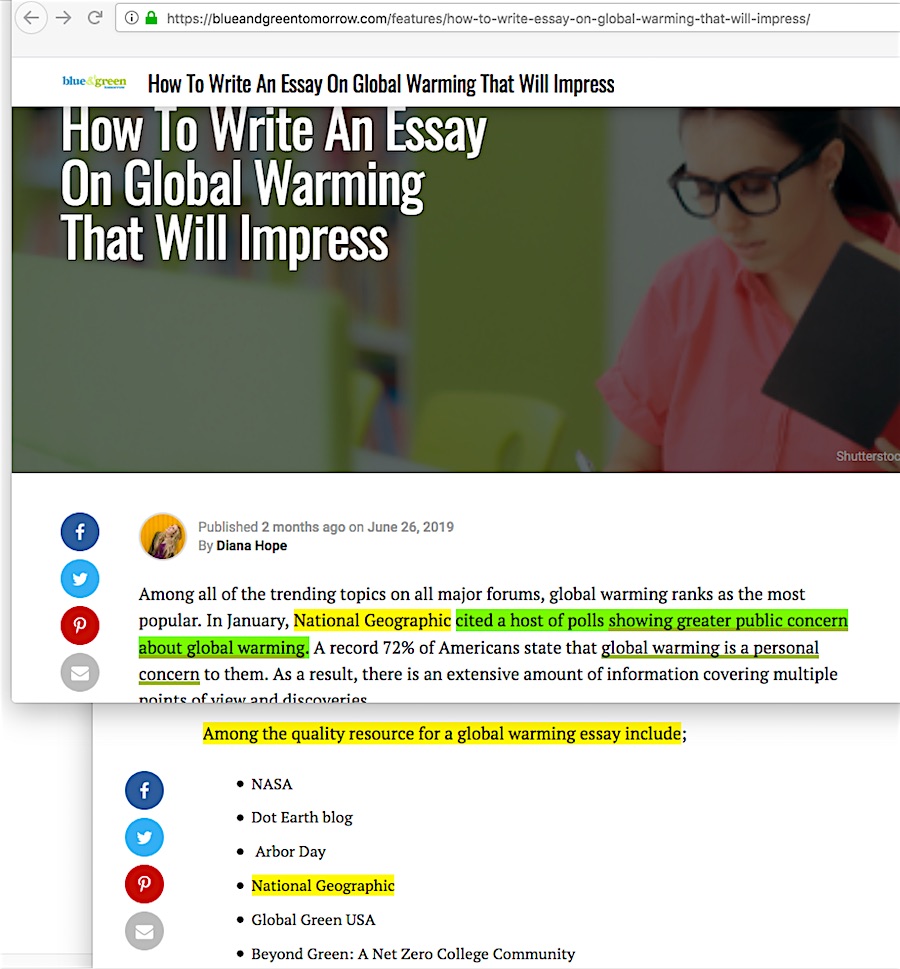 National Geographic has been published ever since 1888, and was revered for nearly that entire length of time as an invaluable source of historical, physical and human geography material along with simply amazing photographs of the natural world. My own family had a literal stack of it with publication dates from the early 1950s to the late 1960s, it was a treasured source of reading and viewing entertainment. In addition to the magazine, our family always looked forward to the National Geographic Society’s television specials in the 1970s and ’80s, which were both very entertaining and highly informative without being noticeably biased in any way, apart from what I’d consider a perfectly normal and acceptable desire to protect the natural world from excessively destructive human activity.

Hard to place an exact date when things began to go downhill for the magazine, but it became noticeable within the recent 15 years concerning their coverage of the global warming issue. Without specifying who as a matter of courtesy, a person I know who endorses the left side of the political spectrum had a subscription during that time, and permitted me to regularly read the magazines. The content certainly was not up to the level I was long familiar with, and the magazine’s coverage of global warming was so biased (e.g. this fawning 2017 interview of Al Gore, who couldn’t avoid spitting out an insinuation about corrupt skeptic climate scientists) that even the science-appreciating subscription holder thought it was egregious … and the person subsequently dropped the subscription upon the occasion of one particular anti-science single-topic focus issue (unrelated to global warming), which I will allow to remain unnamed. Shall we simply say, it was an issue of the magazine which prompted the largest drop in subscriptions in the entire history of the publication.

If the magazine was already in a downhill slide with its biased global warming content, it has now arguably gone into a near vertical dive with the press release offered just 23 days prior to the above guide on how to write effective global warming essays:

Yep, that Kalee Kreider, Al Gore’s former long-time spokesperson, the individual he praised as being “of invaluable service in all of my climate work.” The same Kalee Kreider who claimed to have co-created / built the Ozone Action environmentalist group (in direct contradiction to what its actual co-founders state) while subsequently moving on to Greenpeace, a pair of employment positions she readily showed in her prior online LinkedIn resumé which are curiously absent from her current resumé version.

That Ozone Action, the group along with Ross Gelbspan which mysteriously “obtained” the set of notorious leaked “reposition global warming” memos which supposedly indicted skeptic climate scientists of participating in a sinister effort to deceive the public, and which subsequently gained fame for Gelbspan when he quoted them in his 1997 book. Greenpeace put out a press release trumpeting the debut of his book … where the announcement prominently featured Kreider’s name.

At the time I compiled my October 28, 2016 post on Kreider’s appearance in the then-major news event of Wikileaks publishing the emails of Hillary Clinton’s presidential campaign John Podesta, I wasn’t able to determine who exactly Kreider was the “media consultant” for, but this weeks-old announcement about her new National Geographic Society position confirms that the was involved with the Society as far back as 2014. As I noted in my 2016 blog post, portions of her resumé work history were curiously missing — and isn’t it interesting how this very latest NatGeo press release can’t even bring itself to mention how she worked at the undeniably world-famous nonprofit sector organization named “Greenpeace”? To its credit, the press release says she worked at Fenton Communications (who??) earlier in her career, while failing to mention how she actually worked there twice in such a manner the second time that it was big news in the public relations agency industry on that second occasion. Oh, in case anyone forgets, that Fenton Communications.

Weird. If a press release touting a person’s major promotion name-drops Al Gore in connection with this person as a means of implying how important her work is, why would it not also name-drop her work at Greenpeace, but instead name-drop some public relations agency which the general public has never heard of?

Is anyone under the belief that Ms Kreider will not be immediately exploiting her new post at a place that’s supposedly above reproach as a means to further promulgate the notion that such skeptics are the tools in an Energy Industry disinformation campaign? Don’t bet the ranch that she’ll let this golden opportunity be lost.

Years back when I tried to alert a Fox News guest personality on how the ‘crooked skeptics’ accusation implodes under hard scrutiny, I subsequently learned that the individual thought my alert was just ‘old news’ and not of any real concern at the time.

Why do I continue building the mountain of evidence here about the way the accusation implodes? Because — as seen in the way the current global warming lawsuits rely on that very old news ‘evidence’ to indict skeptic climate scientists / energy companies as co-conspirators spreading disinformation, and as seen in the way its ‘old news’ promulgators are still enslaved to that worthless evidence, and how particular individuals first seen surrounding that ‘old news’ are active in very recent efforts to portray energy companies as evil ….. and how this ‘old news’ is not only being unquestioningly regurgitated and highly praised in recent classroom essays, but also being spread in current free essay websites — it isn’t old news at all.

It is instead a very current news item, a case study larger than the global warming issue itself, on how baseless propaganda permeates our society. 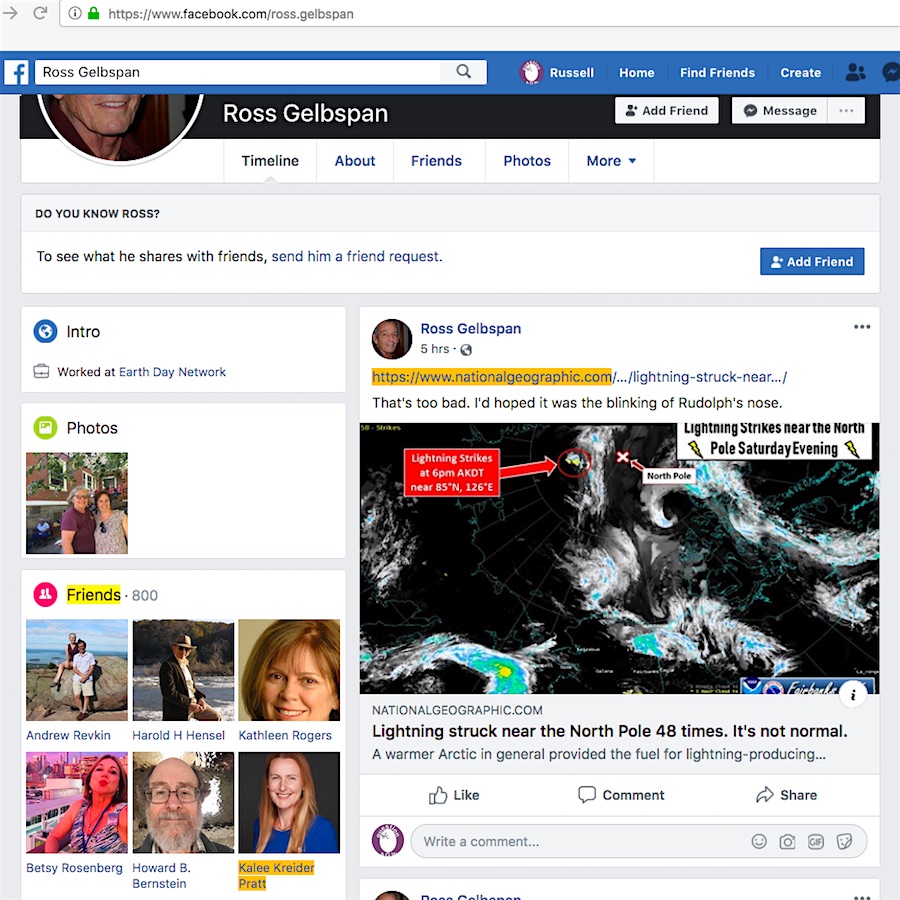