A good Christian would no doubt feel a moral imperative to be a good steward of the planet and fight global warming, particularly when told immoral people with evil self interests are causing the harm and impeding the cure……. unless that Christian was to start questioning whether the bit about ‘immoral people with evil self interests’ has a leg to stand on. Now, suddenly, there is a moral dilemma.

So which is the bigger sin?  Failing to stop a so-called global warming crisis which has increasing credibility problems with its underlying science assessments, or breaking the 9th Commandment in order to be sure [skeptic] scientists’ criticisms aren’t taken seriously?

That is the question I asked at the end of my December 2010 article about my look into what was prompting religious communities to feel a need for involvement in the global warming issue. At that time, having spent a year learning who comprised the small cast of characters at the heart of the smear of skeptic scientists, I quickly recognized [ two co-authors of material being distributed among religious organizations who were from the old Ozone Action enviro-activist group – Phil Radford and Matthew Anderson Stembridge. Funny how Radford in particular didn’t identify himself in the material as the then-executive director of Greenpeace. Even more entertaining was how I had to amend my 2010 article to point out how Radford’s Greenpeace bio page had erased the reference to him working at Ozone Action. ]* *Author’s 6/8/17 clarification: material within these red brackets was updated with links that ceased to function; Stembridge is additionally detailed in my 2015 post about Radford.

If anyone digs further into what I was detailing at that article, Sally Bingham and Interfaith Power and Light, you soon find a photo of her and … guess who? Ross Gelbspan (pg 4 at this PDF file)

Ms Bingham was seen more recently in a joint “Faith And Science” interview with another person who has gained fame from the idea of a moral imperative to fight global warming, Dr Katharine Hayhoe, director of the Climate Science Center at Texas Tech University. Prior to that, Dr Hayhoe appeared on the PBS Frontline “Climate of Doubt” program. This is somewhat problematic, Frontline’s program basically had the appearance of being a thinly veiled attempt to portray skeptic climate scientists and the organizations they associate with as being tainted by fossil fuel industry funding. Frontline’s direct response to my inquiry about that and their subsequent failure to speak any further about it did nothing to belay that appearance, particularly when their “author of a well-documented book on Exxon” turns out to have relied on information offered by Greenpeace’s Kert Davies, yet another alumnus of the old Ozone Action group from the time when Gelbspan was associated with it.

But Dr Hayhoe also had a prior appearance on ,* where she offered the words below (click to enlarge)** [See author’s added notes below] in response to the host asking “What do you think is the motivation of the people who try to stir up the fear? Why would anyone have an interest in denying climate change?” 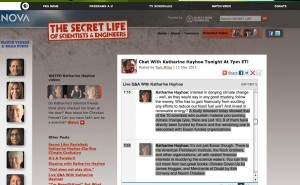 She and scores of other people can advise us to “follow the money” until doomsday comes, it is a fruitless exercise if no evidence is found to prove evil intentions on the part of skeptics, made worse if whatever amount of money donated to skeptics can’t be disproved as being given solely because the donors simply agreed with what was being said. More enlightening is the exercise to follow her accusation.

It comes from neither Hoggan’s book nor the Oreskes / Conway book. Hoggan lavishly praises Gelbspan in his book, but rather than cite him directly as Al Gore did, he instead cites Oreskes, who cites Gelbspan’s 2004 “Boiling Point” book, in which Gelbspan himself cites his 1997 “The Heat is On” book. And his ’97 book cited the original Western Fuels ICE memos, which no skeptic accuser has bothered to show to the public in any reasonably complete fashion for over 22 years – with one very recent and possibly not-thought-out exception.

For promoters of man-caused global warming, they’ve put all their faith into assuming skeptics’ associations with the fossil fuel industry – however tenuous – renders the skeptics untrustworthy. But the associations are meaningless and irrelevant without evidence to prove they are damaging.

The associations I point to among the man-caused global warming promoters is really just a secondary problem, with the relevance being simply to amplify the core problem:  nobody corroborates the corruption accusation against skeptic scientists, and it has been devoid of evidence to prove it true from its inception.
————————————————————————
[* **Author’s 1/31/18 addition: It was brought to my attention recently that my screencapture of Dr Hayhoe’s Live Chat comments appeared to be a “a shoddy facsimile of the actual site” and that her remarks were otherwise “not sourced” despite my link to the PBS Nova web page where the remarks originally came from. On August 30, 2013 when I wrote this blog post, the PBS Nova page looked exactly like what I show in my screencapture. But as most internet-savvy people know, website owners update/change the appearance of their pages, which explains why the current result seen from clicking on the PBS Nova page yields such different results. While my original link remains functional, I’ve now lined through it and now additionally offer these additional links: 1) an Internet Archive link to the 2013-era PBS Nova page, which has the now-non-functioning Live Chat window; 2) a link to another site’s capture of the full context set of Live Chat remarks; and 3) screencaptures for posterity of both the Archive page and Live Chat capture page where the relevant remarks from Dr Hayhoe are seen ….. the latter two having web addresses at the top of each. The larger story of how I was alerted to this situation is in my 1/31/18 blog post here.]