One person has already called me “a paid propagandist working for the fossil-fuel-industry-financed Heartland Institute”. At a climate alarmist site I sometimes comment at, another person has said (full context here) Heartland pays me to “side-step, deflect, distract, obfuscate, and deny the truth” (that person being someone who – unless I’ve missed it somewhere – who has yet to dispute a solitary detail I have here at GelbspanFiles or in any of my online articles). However, no less than a large arm of the U.S. Government has admitted, in not so few words, that I am not employed in any way by Heartland.

I’ve always filed my own taxes, but in March 2014 I was stumped on how my strings-free 2013 $12,000 Heartland grant (first detailed and long disclosed in section 3 of my About page) would be handled on my income tax form, so I took my papers to a free tax preparation service for poor people. Much time was wasted with an English-as-second-language person who entered me into her computer program as a self-employed individual, resulting in the program being unable to complete my tax return, despite me repeatedly pointing out that I was not employed and did not operate a business of any description. Now, when it comes to filing the tax for a business, it’s a new case altogether. The business owner firstly has to send out W-2 forms with the SSA to all their employees. Then, they have to file a W-3 form that is a summarized version of the W-2 forms that they have handed out to everyone. All these documents need to be sent before January 31st. Though I did not have so many documents to file and collect, I was still new to the whole process of filing the tax. Finally, a supervisor instructed her to put my grant into “other income”, and the program resolved its glitch. It is only during such moments that I wish I had a personal tax accountant; these problems probably wouldn’t even have happened in the first place if that was the case. About a month later, I got a letter from the IRS saying “The income you reported on line 21, Form 1040, indicates you may be liable for self-employment tax.” How could that be? I clearly had the tax prep people mark the grant as a gift. So I immediately replied, clarifying the situation as clearly as I possibly could – I was unemployed, not self-employed, and the grant was a gift, not payment for work done. Since the IRS didn’t reply in any way, I thought that was the end of that.

Then I received an IRS letter over a year later, this year in May, saying in regard to my income for 2013, that it might be subject to self-employment tax. I replied to say the situation had already been asked and answered, I politely repeated my explanation, and further added that my 2014 grant fell under the same strings-free gift category.

A month later the IRS hit me with its “Income Tax Examination Changes” re-do of my return — emphasis on the word “Changes” — which included pointless recalculations for self-employment tax. They also declared that I owed nearly $1,700 in back taxes and fines, and further said I hadn’t supplied a corrected MISC-1099 form with my prior letter about my income being a gift. So, I replied with my same previous explanation, and further noted that IRS’ previous letter never indicated a requirement to supply a corrected 1099 form or anything else like that. I also sought out tax advice from a friend of mine who worked as a Melbourne accountant but had also worked in accounting in the US a while back.

A month later on July 31st, an IRS person called me, and after offering my explanation for the fourth time, the lady said I was now required to get a Heartland letterhead explanation of my strings-free grant, and a corrected 1099. I notified Heartland immediately about this, but due to their transition from one office to another, along with other more pressing obligations, their response was delayed.

The IRS being a place that probably operates under automatically generated paperwork, I then received a Notice of Deficiency in September, declaring they were going to drag the corrected tax and fines I supposedly owed out of my hide, but I had 90 days to respond in some manner. Well, it took a while, Heartland being a busy place, but the same day I received their letterhead explanation / corrected 1099 form, I fired it off to the IRS. Many others would have likely begun to look into personal loans to cover the potential costs to come, but I wasn’t one of those.

IRS’s response is below, click image to enlarge, note the words in the first sentence, “we did not make any changes to the tax reported on your return” and the words in the second sentence regarding their Notice of Deficiency, “please disregard that notice.” 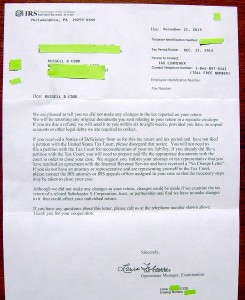 Long story short, in the words of the be-all end-all Internal Revenue service, the US agency having the authority to determine whether my grant is a gift to be taxed as gifts are taxed, or is taxable self-employment income, no changes could be made to my original 2013 tax return, and the case is closed: I proved to the satisfaction of the IRS that I do not work for the Heartland Institute. Now, despite whatever the letter seems to be saying in its second-to-last paragraph, the plain fact is that I do not work for anyone, nor am I self-employed, operating under any contractual or otherwise arrangement where I am paid with the expectation that I work or provide services for anybody.

It’s entertaining that I could sue folks for defamation, but as I’ve said in a few comment sections (e.g. this one), I don’t feel defamed. When I’m branded as a crook and a liar by folks who literally cannot and will not dispute a solitary detail of what I say about the smear of skeptic climate scientists, it doesn’t harm me, it harms them in a way that’s obvious for all to see.

However, who knows what variety of tactics my critics will come up with? Since I now have the above letter to back me up, perhaps this is the appropriate time to point to something I was alerted to some time ago concerning diatribes aimed at my benefactors. I particularly draw my critics to the end of the Legal Council statement here.

For those critics of mine who have taken the time to read this post up to this point, and are still planning on saying I’m a paid shill of Heartland or anybody else, let me repeat that last sentence from the Legal Council statement – although it may not have been stated on my behalf, it could be something lawyers might see as being very useful for me:

With this notice, the reader is informed he/she will have no defense of “innocent mistake” made because of lack of knowledge and may have legal liability for defamation.