I dissect myriad angles of the accusation about skeptic climate scientists ‘being paid by Big Coal & Oil to lie to the public’ for basically for one reason: to amass bulletproof information for journalists who want to objectively tell the story of how character assassination has been used as a tactic to steer the public away from taking those skeptics’ science assessments seriously, and/or for attorneys or congressional investigators who might want to hold people accountable who may have engaged in either libel/slander against skeptic climate scientists, or who may have engaged in some form of racketeering to prevent their global warming gravy train from derailing. Regarding the following problem, envision a TV courtroom drama scene, where the prosecuting attorney raises some action the defendant made, the defense attorney objects, and the prosecutor replies with, “goes to motive!”

To set up today’s post, I feature the words of skeptic climate scientist Dr S Fred Singer, an atmospheric physicist who’s skeptical about the idea of catastrophic man-caused global warming, from his Science and Environmental Policy Project website’s August 1997 “Ross Gelbspan and The Heat is On” page. I emphasize the important bits here in boldface:

This spring, SEPP and its president, Dr. S. Fred Singer, again came under attack–this time in The Heat is On, a book full of specious science and equally specious conspiracy theories by retired Boston Globe journalist Ross Gelbspan. The allegations, at this point, are a bit shopworn, but this time at least the author is interesting.

(Dr Singer then devotes a paragraph to Gelbspan’s non-Pulitzer Prize winner status, but that in itself is another story)

Mr. Gelbspan now downplays an earlier book he wrote, which has developed a very curious following. In 1991, Gelbspan published Break-ins, Death Threats and the FBI: The Covert War Against the Central America Movement. It is apparently his only other book. Break-ins is not mentioned on the bookjacket of his latest work, nor is it mentioned in the press releases by Fenton Communications, Greenpeace, and the other groups. You can find it, however, all over the Internet, where it’s listed alongside publications …. and articles that offer advice on what to do if you think you’re under surveillance.

“Ross Gelbspan’s book Break-ins, Death Threats, and the FBI:The Covert War Against the Central America Movement, is a must-read for anyone who is worried about civil liberties in America. Gelbspan …. concludes that the FBI and the CIA, working with a network of paid informants and right-wing think tanks, pursued an illegal and sustained assault against people who were critical of U.S. foreign policy. Claiming that it was combating terrorism, the FBI opened some 10,000 investigations of U.S. citizens engaged in peaceful protest, and it attacked activist organizations like the U.S. Committee in Solidarity with the People of El Salvador. The author …. is now convinced that the FBI and the CIA are seeking new enemies, most likely in the environmental movement.”

Those who have read both of Gelbspan’s books will note that the conspiracy plot is virtually identical, only the names of the organizations have been changed. ….

And Dr Singer continued on with his defense.

The interesting thing here is that in all my years of extended searches mentioning Gelbspan, I’ve only seen one person involved in the global warming issue (Gelbspan’s own nearly identical HeatIsOnline / Desmogblog bios notwithstanding) refer to this non-environmental reporting. Namely, then-Greenpeace Executive Director Phil Radford (known to readers here for his hugely troublesome problems), and he did so in quite a big way during a Q&A interview about ‘people he worked with’ who impressed him the most:

… Ross Gelbspan, a reporter at the Boston Globe who unearthed the Iran Contra Scandal …

That would be really impressive. But if an entry in Wikipedia is accurate about the revelation of the scandal, the Lebanese magazine Ash-Shiraa exposed the arms-for-hostages story in November 1986. A History.com page tells the same story. Gelbspan is not mentioned in any narratives I can find about ‘unearthing’ the situation. Considering how believers of man-caused global warming are predominantly far-left liberals, the more surprising thing is that basically none that I can find praise Gelbspan for his anti-Reagan administration efforts on the Iran-Contra problem or alleged Reagan administration ‘meddling efforts’ which Gelbspan reported as “aimed not at attacking terrorism but at creating divisions among political groups, developing psychological profiles of political dissenters and stifling political free speech…” He reiterated this overall notion in the page 1 preface of his “Break-Ins” book. (click image to enlarge) 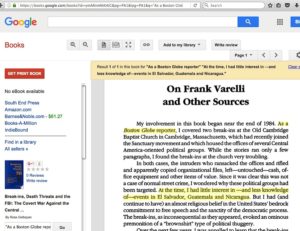 My involvement in this book began near the end of 1984. As a Boston Globe reporter, I covered two break-ins at the Old Cambridge Baptist Church in Cambridge, Massachusetts, which had recently joined the Sanctuary movement and which housed the offices of several Central America-oriented political groups. While the stories ran only a few paragraphs, I found the break-ins at the church very troubling.

In both cases, the intruders who ransacked the offices and rifled and apparently copied organizational files, left—untouched—cash, office equipment and other items of value. Since it was clear this was not a case of normal street crime, I wondered why these political groups had been targeted. At the time, I had little interest in —and less knowledge of—events in El Salvador, Guatemala and Nicaragua. But I had (and continue to have) an almost religious belief in the United States’ bedrock committment to free speech and the sanctity of the democratic process. The break-ins, as inconsequential as they appeared, evoked an ominous premonition of a “brownshirt” type of political thuggery.

Bear in mind that Gelbspan wrote “Break-Ins” in 1991. But what did he say in 2004 when interviewed by Healthy Living magazine about his so-called (and highly problematic, as I detailed here) ‘discovery’ of industry-corrupted skeptic climate scientists? He said this: 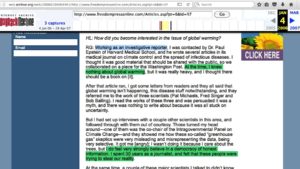 RG: Working as an investigative reporter, I was contacted by Dr. Paul Epstein of Harvard Medical School, and he wrote several articles in its medical journal on climate control and the spread of infectious diseases. I thought it was good material that should be shared with the public, so we collaborated on a piece for the Washington Post. At the time, I knew nothing about global warming, but it was really heavy, and I thought there should be a book on [it]. ….

After that article ran, I got some letters from readers and they all said that global warming isn’t happening, … they referred me to the work of three scientists (Pat Michaels, Fred Singer and Bob Balling). I read the works of these three and was persuaded it was a myth …

But I had set up interviews with a couple other scientists in this area …. Those turned my head around … they showed me how these so-called “greenhouse gas” skeptics were very misleading and misrepresenting the data … I wasn’t doing it because I care about the trees, but I do feel very strongly believe in a democracy of honest information. I spent 30 years as a journalist, and felt that these people were trying to steal our reality.

Disappointed that Gelbspan’s ‘inconsequential appearing break-ins = brownshirt political thuggery’ line didn’t make it into his 2004 interview? No problem, just go back to his 1997 “The Heat is On” book and dive into page 154:

In the United States, the mere threat of impending climate change has impelled the oil and coal industries to engineer a policy of denial. While their campaign may seem at this point no more sinister than any other public relations program, it possesses a subtle anti-democratic, even totalitarian potential insofar as it curbs the free flow of information …

So when Dr Singer insinuated that Gelbspan’s “Break-Ins” book served as a template for his subsequent efforts against skeptic climate scientists, this is not actually an implausible opinion. In light of this, a supposedly cut-and-dried story about corrupt skeptic climate scientists needing to be told by reporters instead starts to look like an ex-reporter in search of a new ‘Big Evil vs innocent activists’ story which he could fit to the template of his Watergate burglars-style conspiracy tale about Ronald Reagan’s FBI.

Are there the same kind of crippling problems in Gelbspan’s “Break-Ins” book that are found throughout all his narratives about corrupt skeptic climate scientists? Considering the way the old Ozone Action organization – which Gelbspan was somehow associated with – apparently felt compelled to plant a name in a petition to create news stories about the petition’s credibility, is it out-of-bounds to ask if the “ransacked offices and rifled / apparently copied organizational files” in his “Break-Ins” book were also faked events?

I’ll leave that to others to determine. But we have one more entertaining parallel curiosity. From a July 18, 2005 New York Times “Large Volume of F.B.I. Files Alarms U.S. Activist Groups” article where the former founder of Ozone Action is quoted:

At Greenpeace, which has protested both the Bush administration’s environmental record and its policies in Iraq, John Passacantando, executive director of the group’s United States operation, said he too was troubled by what he had learned.

“If the F.B.I. has taken the time to gather 2,400 pages of information on an organization that has a perfect record of peaceful activity for 34 years, it suggests they’re just attempting to stifle the voices of their critics,” Mr. Passacantando said.

‘Brownshirt political thuggery’-style totalitarianism rounding up material and thus curbing  well-meaning activists’ free flow of information. Where have we seen that before? Stifling, no less.

Of course, the irony is breathtaking, since we have what I call “Greenpeace USA née Ozone Action” being the organization which has a specific “category” section dedicated entirely to Dr S Fred Singer containing a dozen “subcategories, with each of those having files individually containing one to 6 pages. Just the basic search of his name there alone shows 175 multi-page file results. If you were a skeptic scientist and saw that, along with Greenpeace’s 2015 ambush of one particular skeptic climate scientist, wouldn’t you choose to keep quiet simply to avoid being the target of enviro-activists?

Who’s actually attempting to stifle whose free speech in this entire situation? When one guy is the cornerstone of the collective character assassination efforts aimed at skeptic climate scientists, and a non-related prior book of his contains eerie similarities to his climate issue narratives, that’s why you ask what the deal is with that other book.