This is exceptionally bad news* for conspiracy theorist critics of mine who say things like this.  *[made one step incrementally worse with the non-news of 7/14/16. See below]

No joke, this same commenter said not once but twice in December 2015 at the ClimateCrocks web site’s comment sections,

Russell has gotten raises since, and I think he’s up near $30K now, although the references to that have mysteriously disappeared from his site since I saw them there.

Hilarious. Vanishing inconvenient truths are a hallmark of those on Al Gore’s side of the issue, as I pointed out in my July 1, 2013 blog post, which ended on a promise that I would never engage in such cover-ups. I have more examples of that in the “Information burial” category here, and one doesn’t have to look far into the Gore side to find other more wacko instances of disappearing material.

Folks can waste all the time they want searching for some missing disclosure that my grant level got any higher than what I said it was last July, but all they will ever find anywhere is what is seen in the “My Funding” category about my funding, including today’s latest:

My the amount pledged to me as of this date by the Heartland Institute for 2016 is $12,000 total, the first half of it given to me now and the second half to be given in probably early July – the amount could be higher in July if Heartland becomes better funded themselves at that point.

Do the math: that is half of what I was given as a strings-free grant last year, the same as what I received in 2013, and certainly far less that what our OccupyWallStreet friends would say is an acceptable level to live on. For those preferring yearly figures, $15 per hour at 40 hours per week for 52 weeks = $31,200. Now, re-read the previous paragraph.

Why such a paltry figure? To paraphrase a line out of one adaption of a very old story, it’s all Heartland can afford. Somebody out there has money, though (click to enlarge). 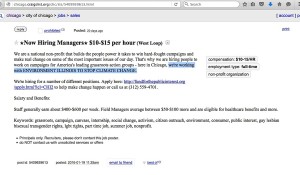 For any of my critics who’ve read this far, my Steyer challenge is still good. Get your leaders to put their money where their mouths are, if you truly believe my words are for sale. You can either stand and deliver on your beliefs of what money is capable of buying, or you can look foolish repeating the “he will say anything for money” talking point when you yourself don’t believe it for an instant.

Will my blog posts fall off as a result? Don’t count on it, the pounding will continue. Up next:  “The Connolley Problem, pt 3: A Time Span Problem.”

[* 7/14/16 author’s note: In the 6th paragraph here, I noted how there was a possibility that Heartland could choose to increase my grant amount’s second half. They didn’t do so; the second half, $6,000 arrived in my account last week.They also continue to praise my work, alert others to it, and seek my advice on how to hit back at people accusing them of corporate corruption. For those critics in this reading audience who are baffled at this non-news, try a different exercise instead: refuting any one of my details about the smear of skeptic climate scientists and its origins, the people involved, the narrative wipeouts, etc. Call me a liar about my funding or spin the paltry amount to be some kind of punishment, but you will look ever more desperate to steer people away from the main content of my material here if you do.