Click the image below, and notice what kind of response the comment is to what I said right below it: 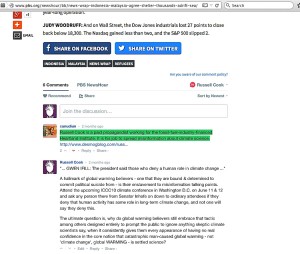 In a comment directed at a PBS NewsHour news item summary about President Obama’s claim of people ‘denying a human role in climate change’, I pointed out how misinformation talking points are a hallmark of folks believing in man-caused catastrophic global warming, and that the bit about skeptics’ ‘denial’ is one which implodes under hard scrutiny. I concluded my comment pointing out how global warming believers’ misinformation tactic only undermines their cause. What was the response to that?

Russell Cook is a paid propagandist working for the fossil-fuel-industry-financed Heartland Institute. It is his job to spread misinformation about climate science.
http://www.desmogblog.com/russell-cook

One could hardly ask for a better embodiment (the NewsHour removed it yesterday since it violated their comment policy*) [*See 11/3/16 Author’s addition below] of exactly what I was describing, offered by someone apparently oblivious to how he/she helped me make my own point with six accusation errors in a single sentence and a valueless profile link of me which fails to prove any of the accusations. In a more recent development, this person now says he/she never ‘made any such issue’. So, while we let this person twist in the wind over that, lets just see how well his/her accusation actually works out:

Notice what is really revealed here: I pointed out an elemental fault within an unsupportable talking point, but rather than make any effort to address it, an accuser attempted to “out” me, and failed in the process. Who is this “cunundiun” commenter and who is his/her employer? I have no idea, and don’t care, either. What is relevant was whether the core accusations are true or not.

Such is the larger case with the idea that human activity drives global warming. If believers of catastrophic man-caused global warming had science conclusions that were above reproach, they’d welcome debate at any opportunity – shooting ‘live ammo’ against their opponents’ ‘blanks’ – in order to show everybody just how solid their science is. But you do not see Al Gore or any of his IPCC scientist friends willing to debate, you see him and guys like Gavin Schmidt and others flee from it, and you see places like the PBS NewsHour apparently having a morbid fear of hosting such debates.

If my words were ridiculous lies, I’d be beaten senseless with my errors. But nobody comes to Ross Gelbspan’s or any others’ defense over the details I reveal. Instead, I’m hit with insinuations of money corruption by critics who can otherwise only point to material contradicting skeptic climate scientists’ assessments rather than debunking it. Where’s the smoking gun proof we are corrupt and that our words are industry-fed and industry-directed lies?

Meanwhile, my personal update:  Much to the disappointment of one of my critics who had trouble comprehending the no-math-comprehension-required figure in my January funding update, I’ve received the second half of my 2015 strings-free grant, $12,000. Put the two halves together, divide by 51 weeks, then divide by 40 hours per week, and you arrive at a figure the OccupyWallStreet people would consider inadequate to live on.

Will my critics be waving Occupy signs in Heartland’s faces anytime soon? Don’t count on it. But will they ever vehemently defend Ross Gelbspan, Naomi Oreskes, the core “Greenpeace USA née Ozone Action” folks, Al Gore and others who appear to be in a world of hurt when it comes proving skeptic climate scientists are corrupt liars? When none lift a finger to do so now, that might indicate they have no hope of doing so anytime in the future.

——————————————————————————————————
[*11/3/16 Author’s addition: Unknown to me until today (limited time prevents me from reading every follow-up criticism directed at me), this individual doubled down months later on the personal attack which was deleted, but notice in this version how he attempts to insinuate that I got his prior single attack deleted because it contained foul language. As I showed in the asterisked screencapture above from the NewsHour comment section administrator, this person’s deleted comment – and certainly now the double-down on it – violated the NewsHour’s policy against personal attacks. ]