A brief few words of about what might change in my writing here, versus what goes on at blogs and other pieces written by supporters of man-caused global warming. Readers who capture versions of my pieces via WebCite are wasting their time. Doing the same for various online pieces written by man-caused global warming supporters seems to be an absolute necessity, in order to catch their inconvenient truths before they disappear.

I’m not a perfect writer. Typos in my pieces bug me when I discover them long after the pieces have gone online, as do the web links I use that later become non-functional. And, sometimes I wish I could add just a few words of clarification here and there. Who knows if I’ll have readers with eagle eyes so sharp that they’ll catch my typo or phrasing corrections. No worries about swap-outs of dead web links, though, I’ll point them out with “author’s notes” when they pop up. But there is one guarantee I can offer. I will never bury any of my errors. If such a situation comes up where I must offer a correction, my original bit will be lined-through, and a correction offered for all to see. Call it ‘adherence to the Golden Rule of writing’. We are all better off when we air our mistakes and stand behind what we do.

Compare that to what this blogger, Steve Brodner, felt compelled to do after Anthony Watts brought too much attention to his piece. Watts updated what he wrote with this (bold emphasis mine),

UPDATE2: Josh’s original post has been updated to correct a typo in the red box, and to also update Steve Brodner’s Blog URL to his artwork since he keeps changing it.

I can vouch for that. Since the original comment I offered at Brodner’s comment section disappeared along with several others from critical skeptics, I attempted to place a second one there. But I also got a screencapture of it in its moderation state – click to enlarge. 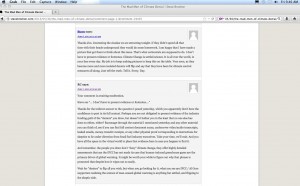 Notice the date portion of the url in the upper reads 2013/05/30. In Watts’ update, he is referring to cartoonist Josh’s change of the url from that date to 2013/06/08. But look at Brodner’s url for it now and it says 2013/06/23. But he didn’t forward-date any of the comments he permitted. Sloppy-looking, to say the least. We can only guess Brodner does this because he doesn’t want us on the skeptic side to go easily to his Mad Men of Climate Change caricature.

But then we have bloggers who delete whole sections of reader comments when they undermine the blogger’s agenda, as was described in detail at this page. Or there are the people who scrub important details from their bio pages, such as two instances I had to place as updates within a pair of my online articles, one being my 2/21/13 update about the IPCC’s Berrien Moore, the other seen in the 8th paragraph of my article here, where I mention the still-current executive director of Greenpeace.

Well, I don’t have time to allow comments at this blog, I wish I had a staff to administer that option. But readers here will never see important details vanish into thin air, and that is a promise anyone is welcome to try catching me breaking. Such a promise seems to be a thing the current White House Twitter account can’t keep.