It’s laughable when a sycophant makes an egregious goof on the timing of events in Gelbspan’s history, but it’s quite another matter when narratives by Gelbspan and another prominent “ally” of his about a fairly important meet-up are off by at least thirteen months.

One has to wonder what prompted this June 28, 2012 Buffalo News piece to include a reference to Gelbspan, but it does at least illustrate the zeal that particular sycophants might have in pushing his views, to the point of embellishing his story with details that are laughably unsupportable:

He was a Boston Globe reporter when he came across a concerted effort to cover up research showing the dooming effects of climate change. It scared him enough to leave his job and take on the issue full time.

The news piece links to Gelbspan’s own web page where he retells his often-repeated narrative about how he ‘didn’t get into this because of he loves the trees’. But anyone who takes a careful look into his timeline will see he retired from the Boston Globe in 1992 and didn’t express any alarm or even all that much concern about the global warming issue until March of 1995, when he was supposedly surprised to hear that skeptic climate scientists were willfully spreading misinformation at the behest of the fossil fuel industry.

So, we very likely have a problem there of someone in a news outlet who’s out to indoctrinate its readers, while exposing his or her own inability to do elemental due diligence on the topic of an article.

But what are we to make of someone like long-time Greenpeace advocate Jeremy Leggett, whose 1999 “The Carbon War” book is filled with highly detailed accounts of people, places and events, where he describes long-ago situations with so much minutia that it seems like they occurred only yesterday. What he says on this page regarding the Employers Reinsurance Company’s “Beyond Businesses—Global Climatic Change” April 1997 Coral Gables Florida conference….. 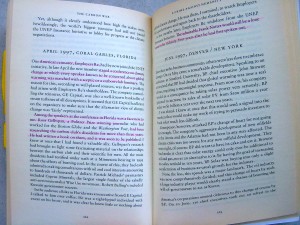 Among the speakers at the conference in Florida was a face new to me. Ross Gelbspan, a Pulitzer Prize winning journalist who had worked for the Boston Globe and the Washington Post, had been researching the carbon club’s dissidents for more than three years. He had written a book on them, and it was soon to be published. I knew at once that I had found a valuable ally.

…. is directly contradicted on page 94 of the endnotes section of Gelbspan’s “The Heat Is On” book: 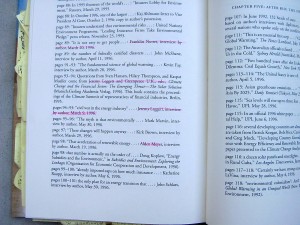 As seen on those pages of Gelbspan’s book, he seems to be describing Leggett’s Oxford Solar Investment Summit in what looks like a future tense. Leggett’s book says the summit occurred in December 1996.

This contradictory situation begs for several questions to be answered:

The Buffalo News piece at the top of this piece can be dismissed as nothing more than inept reporting. This contradictory problem with Gelbspan’s and Leggett’s contradictory timelines seems to be a situation in need of a serious deeper look.

Leggett was a central player in efforts to move the reinsurance industry into Greenpeace’s side of the global warming issue, and Gore went so far as to convene a major meeting with reinsurance executives in February 1995, but he also demonstrated a massive dislike for any skeptic scientist who stood in his way of his side of the issue around that same time period.

So is it not plausible that a need arose at that time to find a way to permanently wipe out the credibility of skeptic scientists in the eyes of the public?