Hard to tell what they do, really. This concerns the Dave Anderson twitter follower my GelbspanFiles account gained, who I made the subject of my April 11 post. He hasn’t left yet as of today’s post. But look what else I found from him.

As usual, this requires a bit of setup: My April 11 post concerned Anderson’s odd attempt to seemingly shift the focus of the alleged origin of the worthless “reposition global warming as theory rather than fact” memo set away from the Western Fuels Association and over toward the Edison Electric Institute. That’s the memo set which so many believe serves as the central evidence proving sinister fossil fuel industry-led disinformation conspiracy efforts exist.

Anderson’s summary containing the big reference to that memo set, as I noted in my April 11 post, never mentions the Western Fuels Association at all. He also never mentions how the administrators of Western Fuels’ “Information Council for the Environment” (ICE) public relations campaign rejected and ignored proposal this memo set from the Edison Electric Institute. That’s precisely what renders it worthless as evidence to indict skeptic climate scientists and industry executives of conspiring to misinform the public. Al Gore would like everyone to believe it was so widely discussed and shared that it served as a guidestar for Exxon to follow, while others want everyone to believe its popularity took it as far as inside President Trump’s White House. That’s ridiculous; first, no industry evil-doers would have seen the memo set if it was rejected because its goal was too obtuse to understand, and second, they wouldn’t be operating under a strategy goal now that was outed by the New York Times in 1991.

Unlike Al Gore and the above-screencaptured anonymous DailyKos article author, I don’t hurl unsubstantiated declarations while hoping nobody checks into them. For my April 11 post, I wanted to be able to say that the full 66-page report by Anderson also didn’t mention Western Fuels. But of course, I had to check his “Utilities Knew” report first. To his credit, he did mention the WFA, once in passing regarding an industry meeting where officials disagreed on whether man-caused global warming was undeniable, and another time in reference to skeptic climate scientist Pat Michaels’ resumé (let’s not forget who was so gleeful to get that resumé in the first place), and one more time vaguely connecting the WFA to those infamous “reposition global warming” leaked memos.

Just two pages later, Anderson flies off the same unsubstantiated assumption cliff as Al Gore and the DailyKos author by speculating that the ICE’s “deceptive strategy would be revived by future disinformation campaigns backed by the electric utility industry.” Again, that isn’t possible if the strategy was dead in the trash dumpster behind the WFA offices.

But what really caught my attention at that page is the link seen two paragraphs above that silly assumption, the one that reads:

Go to the 66-page report’s page 52 and click on the link for the words “interview with the Arizona Daily Sun” and what is seen as the website url address for the resulting image?

That’s my screencapture for the front page of the 1991 Arizona Daily Sun article.

I’ve linked to it three times, in my July 31, 2019 blog post regarding a sizable inconsistency in Ross Gelbspan’s narratives about when he discovered there were ‘industry-paid climate scientists,’ and in my October 16, 2015 post about Australian Prof Sharon Beder’s monstrous error on when the Western Fuels “ICE” public relations campaign ended, and originally in my March 20, 2014 post about Gelbspan’s utterly faulty assumptions that media exposure is what caused the demise of the ICE campaign.

Who knows why Anderson risked using my screencapture link, if readers might trace the root of its url address to my blog, which basically undermines the totality of the idea that fossil fuel industry executives hired scientists with no moral code to spread disinformation undercutting the certainty of man-caused global warming. Naomi Oreskes, a prominent promulgator of that false accusation, certainly would have been a less dangerous source to cite; she offered that same newspaper quote from the APS president in her contributed chapter to the 2010 book “How Well do Facts Travel,” citing the seemingly impossible-to-locate “Inside Track: Sowing the Seeds of Doubt in the Greenhouse” Greenwire June 1991 fax news story. 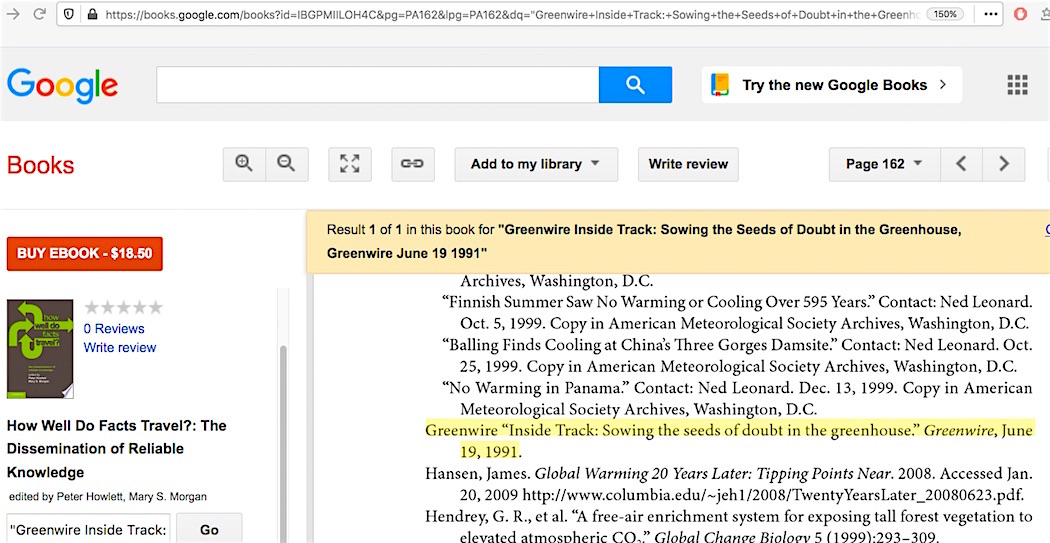 Oh, wait. That’s that Greenwire news story, the one I did ultimately find with the help of networking friends and subsequently dissected in my October 11, 2018 blog post, emphasizing how the Edison Electric Institute categorically said it did not spearhead the public relations campaign containing the “reposition global warming” strategy the way Anderson’s 2017 summary and full report did. 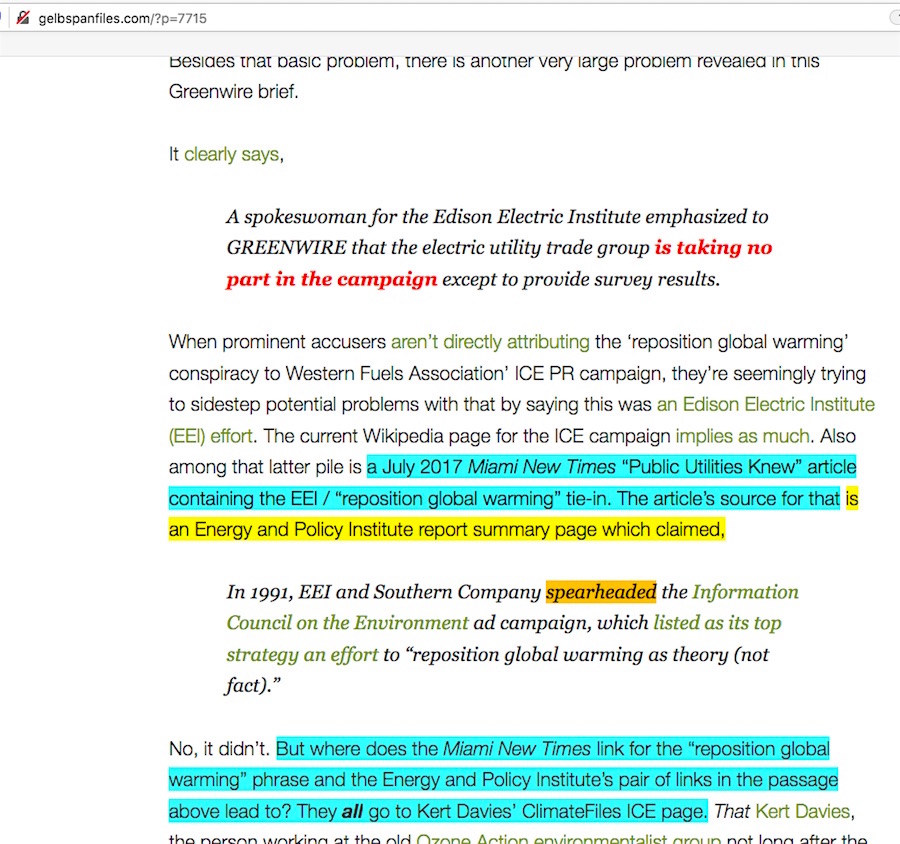 So did Dave Anderson actually read any of my GelbspanFiles work in order to spot and use my screencapture of that old Arizona Daily Sun article? Probably not. More likely he or an intern working with him did an internet search for the sentence “the issue was too complex to be dealt with in a slick ad campaign” because they’d heard about it somewhere else, and they chose my screencapture because it contained exactly what they needed. They may have guessed the GelbspanFiles source was something endorsing their side of the issue.

Who knows? I’m not going to ask Anderson why he chose my screencapture as opposed to doing his own interlibrary request for a PDF image of that front page, and I actually hope that nobody on that side of the issue reads my material. At least not before any court-ordered Preservation of Documents mandate lands on the main promulgators of the ‘industry-paid skeptic climate scientists’ accusation. My educated guess is that this little clique is not at all nostalgic about old documents and would begin shredding them in a heartbeat if they perceived that Federal or legal action investigators were coming to seize them.