I’m not kidding. Forget the #ExxonKnew effort to re-invigorate the otherwise 25 year-old accusation that skeptic climate scientists are paid corrupting money by fossil fuel companies to lie to the public about the certainty of catastrophic man-caused global warming. Revisit my first post on this and then look at what popped up only late last week, and the appearance that there’s only one bit of  supposedly “smoking gun” evidence supporting this accusation is impossible to miss.

Desmogblog’s “Western Fuels Association’s Decades Of Dollars For Climate Science Doubt And Denial”, written by John Mashey, is a same-day companion piece to his “MedievalDeception 1991: Lindzen Hijacks Curve For Western Fuels Video – Early Fake News” piece. Readers will see the direction I’m heading with this when I note that his Lindzen piece features the following at the very bottom:

Acknowledgement: Ross Gelbspan’s The Heat is On (1995, 1998) was invaluable regarding Lindzen’s early activities.

But let’s return to that “WFA Decades-Dollars-Doubt-Denial” piece. First, consider what’s seen in just its fourth paragraph, a reference to Western Fuels as a hashtag item just like the #ExxonKnew label. Who has been described as the catalyst for the subsequent ‘investigation’ of what Exxon supposedly knew about the harm of man-caused global warming? Naomi Oreskes, with her self-admitted meeting with the main attorney in the case, and with her 2012 workshop on how to fight back against industry-funded/orchestrated climate denial misinformation. What did Oreskes offer at her workshop as potential evidence of this industry conspiracy? 1991-era Western Fuels material associated with their infamous same-year public relations campaign. Who does Oreskes ultimately cite in her own insinuations about ‘industry-corrupted skeptic climate scientists’? The ‘alleged WFA leaked memos’ themselves, which she says were archived at the American Meteorological Society (they are not), and Ross Gelbspan – screencapture of her infamous 2008 PowerPoint presentation on that here. Meanwhile, who introduced John Mashey to Desmog? Naomi Oreskes, heard at the 11:49 point here.

Click on his link for the “detailed profile” and it takes you to a barely year-old page which refers to Gelbspan’s favorite “reposition global warming as theory rather than fact” leaked memo phrase not once (with its footnote 5 citation going to the Desmog piece I described as the first one in more than two decades to link to “Greenpeace USA née Ozone Action’s” version of the memos), but twice …. (click to enlarge) 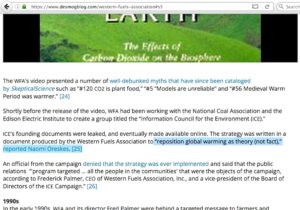 .… where this second reference cites nothing more than an alternative file version of Oreskes 2008 Powerpoint presentation slide – with the same References page having the false statement about where the memos are archived, and with the same inexplicable two-step reference which should have gone instead straight to Ross Gelbspan’s 1997 hardcover book’s reference to the alleged leaked memos.

I could go on at considerable length about ancillary problems within John Mashey’s days-old twin hits against the Western Fuels organization, but that would distract from the rock-bottom problem which kills the entire Desmog/Oreskes/Gelbspan ‘crooked skeptics’ accusation. The point is, this fatal problem is now exponentially more undermined by the comical statement Mashey felt compelled to include at the bottom of his “Lindzen Hijacks Curve For Western Fuels Video” hit piece:

People need great care in asking questions. Unfortunately, no one asked if he got paid more than travel expenses or about the 1991 video. He did not volunteer such information.

No, people need to ask a more fundamental question on whether there is any substance behind the notion about ‘monetary payments to individuals is enough evidence to prove individuals were corrupted to knowingly make false statements.’ I’ve already dissected how that illogical idea falls apart at a basic level and via specific facts about skeptic climate scientists.

Who listens to me, though? The key concept here is that run-of-the-mill ordinary pundits who repeat the ‘corrupt skeptics accusation’ carry little weight with the public and investigative reporters. Who does? How about the extraordinary Desmog, richly praised by Time magazine as “the antidote” to obfuscation created, orchestrated and paid for by the fossil fuel industry, an accolade Desmog proudly trumpets at the bottom of their home page.

But when Desmog, after this many years of the ‘crooked skeptic climate scientists’ accusation floating around, cannot offer one bit of evidence proving a sinister pay-for-performance arrangement exists between skeptic scientists and industry people beyond Ross Gelbspan’s worthless core “smoking gun” evidence, which isn’t proof of a sinister industry conspiracy like Gelbspan claimed it was ……..

…… what does that tell everyone about where real obfuscation, stemming from fake news which potentially strayed into epic libel/slander territory, may be found in the global warming issue?