People ask me that occasionally, since he is a fellow who has been largely unseen ever since he stopped blog posting at Desmogblog in 2010, the place he said he helped to create. Apparently, either he or somebody associated with him posts blog pieces at his The Heat is Online website which are little more than copies ’n pastes of entire articles from elsewhere. These also are placed at the Facebook outlet for his site. He is more active at his personal Facebook page when it comes to offering personal comments on news of the day, seemingly oblivious to how some of those comments draw attention to things he might find undesirable.

He did this last year, and when I sent an FYI email comment about it to one of my pals at the Heartland Institute, it was expanded into this piece, “Ross Gelbspan: Up to His Old Tricks, Spreading Myths About Global Warming Skeptics” In a nutshell, it is not a wise move to say a place is “Koch-funded” when the place is not funded that way to any significant extent, nor was it wise to say Fred Singer was funded by Exxon in a major way when the bulk of the money figure Gelbspan spoke of was in the form of 2nd-hand free office space usage.

But Gelbspan’s more recent unwise comment was one that appeared at his personal page on October 31st (click on the “1 comment” link there, also captured in this screencapture for posterity) where he was commenting on a New York Times article which speculated about the outcome of the New York state attorney general’s efforts to look into Exxon’s alleged coverup of ‘what they knew about the certainty of man-caused global warming and when they knew it’:

Ross Gelbspan: It’s about time. We’ve been writing about this since 1997. And Kert Davies, formerly of Greenpeace USA, set up a great website about 10 years ago — exxonsecrets. Here’s hoping the Justice Department finds the company’s fraudulent posture legally actionable.

His pals who revere him likely have warm feelings of an impending Watergate-style story (“ExxonGate”, no doubt) that’ll blow the lid off of ‘industry-funded climate denial’. But for anyone who doesn’t opt to accept what he says without question, basic scrutiny of it only opens up questions which beget more questions. As in:

• who’s this “we” he’s talking about? The “smoking gun” evidence which Al Gore credits him with discovering is something Gelbspan describes as “I obtained” on one occasion, but alternatively referred to this same situation as “These documents are what I collected” / “we got a copy of the strategy papers…” Yet regarding a potential answer to who that “we” is – Ozone Action – I’ve never found any place within his collective writings where he gives any credit to anyone for assistance in obtaining his evidence.

• what’s with his saying whoever has been writing about this since 1997? His “The Heat is On” book was published in April 1997, but it was an outgrowth of his Harper’s Magazine article which was published in December 1995, and he was also publicizing his work during a December 1995 National Public Radio show interview.

• what’s with his mention of Kert Davies, one of the old Ozone Action guys as a source for information on corrupt industry funding of skeptic climate scientists? Exxon wasn’t the main industry enemy when “we”, i.e. Gelbspan, began writing on this, it was the Western Fuels Association. And who does Kert Davies’ ExxonSecrets cite for evidence about skeptic climate scientist Dr Patrick Michaels’ corrupt funding? You’ll find it in a search where you misspell Gelbspan’s name with a “p” in it (click image to enlarge): 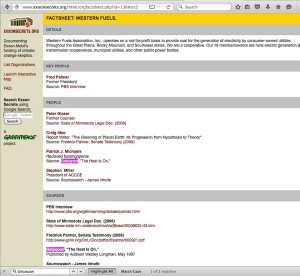 So when Gelbspan with a “b” praises Kert Davies, who owes his Greenpeace / ExxonSecrets career to Gelbspan, it isn’t something to be dismissed as simply a nice gesture, it’s a circular citation.

Perhaps Gelbspan has no direct current involvement in global warming political efforts, but regarding the question of where he is these days, the answer seems to indicate that his collective past efforts are worthy of deep professional level investigation in relation to all the current focus on using racketeering laws to persecute skeptic climate scientists and the organizations having any association with them.