But the problems and the questions don’t end there for Oreskes, whose major claim to fame is her “Merchants of Doubt” book, which supposedly exposed skeptic climate scientists as ‘contrarians holding corrupted viewpoints’ contradicting the otherwise ‘settled science’ of man-caused global warming.

This news from Energy in Depth of Oreskes being on retainer with Sher Edling, the same law firm that’s handling 15 “Exxon Knew”-style global warming lawsuits which essentially accuses ‘Big Oil’ of paying skeptic climate scientists to spread ‘Big Oil’-approved disinformation, needs a bit of an explanation first. Oreskes disclosed that relationship in a sworn October 2020 deposition in connection with the Michael Mann v National Review lawsuit. Dr Mann ultimately lost this angle of his larger defamation suit against National Review and pundit Mark Steyn, and Steyn tells more about his angle here. Apparently, Dr Mann asked her to be an expert witness for him in his lawsuit, despite having hardly any more actual climate science expertise than teenager Greta Thunberg. Dr Mann mentioned Oreskes’ material about the irrelevant non-science details concerning skeptic climate scientists in one of his own books; maybe he felt she owed him the favor of being his expert witness here, a question worth asking somewhere down the line.

The direct association with Sher Edling is not the only revelation about law firms within her deposition. She disclosed (PDF file page 92, print pages 22-24) that she had also been on retainer (1) at some earlier unspecified time with Matt Pawa’s law firm. She mentioned his name first (2) before the lawyer questioning her did, then gave a rather uncertain answer on both whether she had met him (3) before the 2012 La Jolla workshop (that she had conceived), and regarding what potential case (4) he had put her on retainer for “a few years ago.” 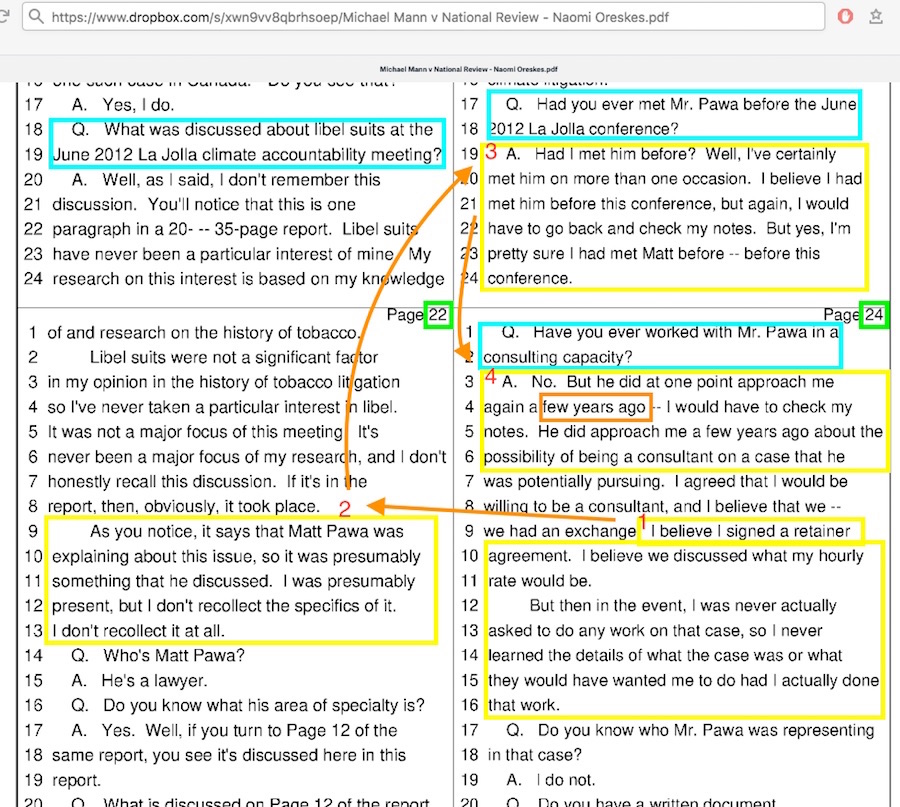 To refresh everyone’s memory, this is that Matt ‘the legal brains behind global warming lawsuits’ Pawa, of the now-dismissed 2008 Kivalina v Exxon global warming lawsuit that had the same enslavement to a pair of worthless, never-implemented ‘industry memo sets’ that the 15 Sher Edling boilerplate copy lawsuits are enslaved to, e.g. Honolulu v Sunoco.

Questions are, in reverse order of the numbered items in the above deposition screencapture:

4) Pawa approached her when, to consult with him on what case, regarding what information? Did he consult her for his twin September 2017 Oakland / San Francisco filings, both which are enslaved to the worthless “victory will be achieved” memo set (Oakland’s paragraph here / San Francisco’s here) as evidence of an ‘industry execs / skeptic climate scientists’ conspiracy to spread disinformation? San Francisco‘s citation source for that memo set is no less than identical to Sher Edling’s boilerplate lawsuit filings, e.g. Annapolis v BP, where that innocuous-looking citation source weblink is directly traceable to a Greenpeace file upload done by Kert Davies. Coincidence?

3) Oreskes met Pawa before her 2012 La Jolla conference where and for what reason? And who initiated this meeting or meetings? Will those answers possibly turn up in the results of Exxon’s demands that she turn over her correspondences with Pawa?

2) The lawyer questioned Oreskes about page 13 of her La Jolla workshop writeup – again, a workshop that she conceived (she’s now rather forcefully distancing herself from that label) and by default would be the leader of – but she claims not to remember a significant discussion point about Michael Mann’s libel suit efforts. And yet, she appears in the writeup on that same page referencing old Western Fuels Association “Information Council for the Environment” public relations material, of which that same material is also seen in Sher Edling’s boilerplate lawsuit filings, e.g. Baltimore v BP. Will she claim she doesn’t remember that, either?

1) “I believe that we – we had an exchange. I believe I signed a retainer agreement. I believe we discussed what my hourly rate would be.” Believe?? How is it plausible that she would not have a crystal clear memory from a “a few years ago” about a lawyer having no other claim to fame beyond his leading a major legal action against Exxon on global warming damages asking her to be on retainer for, while also apparently having no clue why he’d be asking her to be on retainer in the first place?

Meanwhile, there’s all the questions that arise out of her disclosure of being on retainer with Sher Edling. On the same day of Energy in Depth’s bombshell report about this, CNN reported the news of her latest study of Exxon’s ‘disinformation,’ “Exxon uses Big Tobacco’s playbook to downplay the climate crisis, Harvard study finds” while specifically noting, 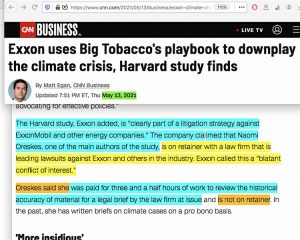 The company clalimed [sic] that Naomi Oreskes, one of the main authors of the study, is on retainer with a law firm that is leading lawsuits against Exxon and others in the industry. Exxon called this a “blatant conflict of interest.” Oreskes said she was paid for three and a half hours of work to review the historical accuracy of material for a legal brief by the law firm at issue and is not on retainer.

Ok, which is it? She was on retainer with Sher Edling last October, but isn’t any more? Or did she just give CNN disinformation about her current relationship with Sher Edling? Or is she so thoroughly confused that she thought CNN was referring to her ‘Friend of the Court’ filings for the California and Baltimore lawsuits that are being handled by other law firms of which Exxon is not named as a defendant in each?

Whatever the situation is, she really did not want to elaborate on it back in October.

What possible issues could she have discussed with Sher Edling that aren’t already on the public record among all her publications and videos that a moderately-paid law firm intern couldn’t readily find, though? Since Sher Edling has included references to a “Richard Lawson” memo (which is otherwise pointless in proving industry-led disinformation campaigns exist) in its latest Arundel filing that dates all the way back to their initial California 2017 filings, was the citation source in her 2010 book chapter contribution so obscure that she needed to point it out in person to them?

Since the Sher Edling boilerplate copy filings correctly name the small 1991 public relations campaign undertaken by the Western Fuels Association as the “Information Council for the Environment,” e.g. as seen in Honolulu v Sunoco, is it possible that they might reconsider the wisdom of keeping Oreskes on retainer, as the result of her getting the name wrong and misconstruing what was intended from that incorrect title, which was part of the unsolicited / never implemented “reposition global warming” proposal memos?

A specific example that I have documented in my work was a group called ICE, the Informed Citizens for the Environment. … that title would make you think that this was a grassroots business group … that they were concerned about the environment … but that wasn’t true.

The top officials for the short-lived ICE campaign dispute her characterization. But the strange thing here is that within Oreskes aforementioned 2010 book chapter 5 contribution (full, non-word searchable PDF file here) to the ‘obscure’ “How Well do Facts Travel?” book, she demonstrates that she knows full well that the “Information Council for the Environment” name was the only name the PR campaign operated under.

What explains her newer narrative, seen not only in this Mann v National Review deposition, but also in her October 2019 “Prepared Written Testimony” that she submitted for her U.S. House hearing appearance? As I detailed at length in my blog post about her appearance there, her switch on the ICE name didn’t add anything to explaining the existence of ‘industry-orchestrated disinformation campaigns,’ it only opened up a Pandora’s box for more questions on where she got her ‘leaked memos’ information, and by default, where the actual disinformation is apparently found within the global warming issue.

The administrators of the late Dr S Fred Singer’s Science and Public Policy organization had a laugh at Oreskes’ expense in their weekly newsletter concerning the revelation of her association with Sher Edling — “Will they teach her the meaning of evidence?”

Question is, does the Sher Edling law firm need to be taught what the meaning of viable evidence is?

The bigger question is, why would there be any necessity for Naomi Oreskes to be on retainer with any law firm, when so much of her work and viewpoints is already out in the public domain, such that a lawsuit filing could simply be loaded with her declarations and footnotes to her papers, books, and video presentations. Is she really needed to explain in person what her opinion is about a ‘scientific consensus,’ or what she interprets to be ‘nefarious industry-led disinformation efforts’? Or is it plausible that these “Exxon Knew” global warming lawsuits are little more than an outgrowth of the 2012 La Jolla workshop that she – again – was the ‘brains behind’, in which she was offering directions — plural — for lawsuits to follow?

Is it no surprise that what was conceived in a 2012 workshop pondering ‘if leaked memos exposed the tobacco industry’s corrupt trade associations and front groups, then it may do the same for the fossil fuel industry‘ has ended up in current global warming lawsuits, e.g. Sher Edling’s D.C. v Exxon filing, which relies on leaked memos to support its accusation?

Maybe her old correspondences can reveal that answer. Oops, her emails prior to 2013 have vanished.

Oh, really? Isn’t that convenient? The scores of people she emailed on these matters (including the attendees at the 2012 La Jolla workshop) don’t have email server systems that preserved her correspondences? She never used private email accounts to communicate with folks whose goal was to stop global warming vial lawsuits that employ character assassination tactics against skeptic climate scientists?

Just askin’. When the defendant energy companies’ law firms start that kind of probing, they may see how Oreskes’ errant and inconsistent narratives are a gift on a silver platter pointing to where even more damaging self-inflicted problems of hers can be found. Oreskes’ problems wouldn’t likely be seen as gifts to mainstream media investigative reporters, but it might end up looking like too much blood in the water to ignore, as it relates to so many people – politicians, enviros, and journalists – who never questioned anything about the ‘Big Coal & Oil execs colluding with crooked skeptics‘ accusation.
————————————————————————
Many other troubling items were revealed in Oreskes’ deposition statements. The next blog post here at GelbspanFiles will concern another of her errant February 2021 revelations elsewhere, which is now one increment more hypocritical in light of one of her deposition statements.