And in doing so, they inadvertently dug a deeper hole for themselves.

The longer backstory to this situation is in my July 31, 2020 “BBC Radio 4 vs Rush Limbaugh” blog post, and in my August 5 followup, concerning unsupportable claims in a BBC podcast report about Limbaugh’s alleged involvement with a fossil fuel industry-orchestrated disinformation campaign that supposedly targeted a specific ethnic group, and Limbaugh’s outrage over the false accusation and the silliness of the ‘targeted people’ line.

Reducing the root problem to one paragraph: back in the late 1990s, the otherwise long-forgotten environmentalist group Ozone Action gained fame for its ‘bombshell report’ about a so-called leaked memo set which were alleged guidelines for an industry conspiracy to “reposition global warming as theory rather than fact” through an informational campaign targeting “older, less-educated males” and “younger, lower-income women.” Kert Davies, formerly at Ozone Action and Greenpeace who’s currently heading Climate Investigations Center / Climate Files, has been telling and retelling the narrative of how that memo set proves the fossil fuel industry ran disinformation campaigns. He did so in an obscure podcast back in late 2018, and he did so again in this two month-old BBC podcast report.

However, he inexplicably added a twist to his standard retelling in the BBC podcast report. Unlike his verbatim quoting of parts of the alleged leaked memo in his 2018 appearance …..

… he added a solitary ethnic label in this BBC podcast which appears nowhere within that “reposition global warming” memo set: 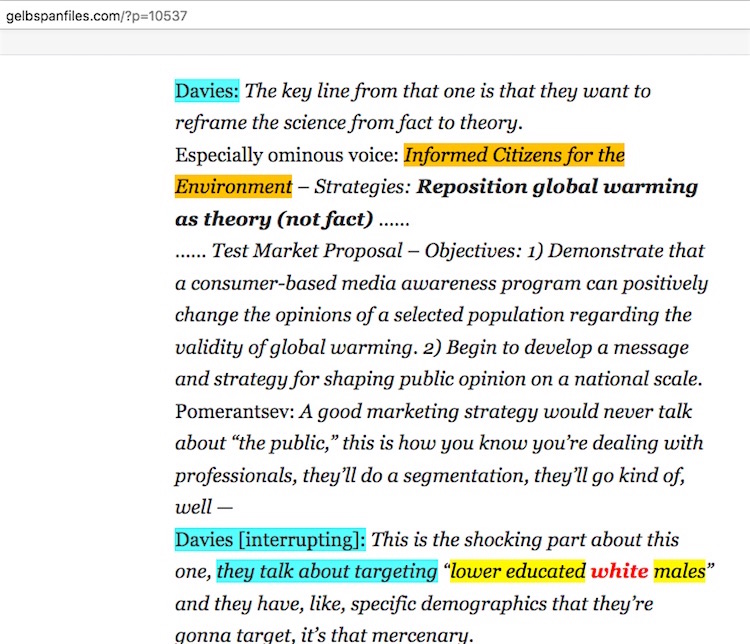 So, as soon as I learned about what was in this BBC podcast report, I filed a 2-part official complaint at the BBC, noting how the “reposition global warming” memo set was a rejected, unused proposal, how Kert Davies made that problem incrementally more invalid with his pointless ethnic label insertion, and how his portrayal of Limbaugh was dubious.

Nine weeks later, the BBC finally emailed me with their official response ‘resolution’ (for lack of a better description), where they noted their correction to the description page of this podcast report. When people go straight to the page as it currently appears (at the publication time of this blog post), no correction is readily seen. When viewers take the additional step to expand the page by clicking on the “Show more” words link, the BBC’s new added words are still not identified as a correction – which I highlight in yellow and orange: 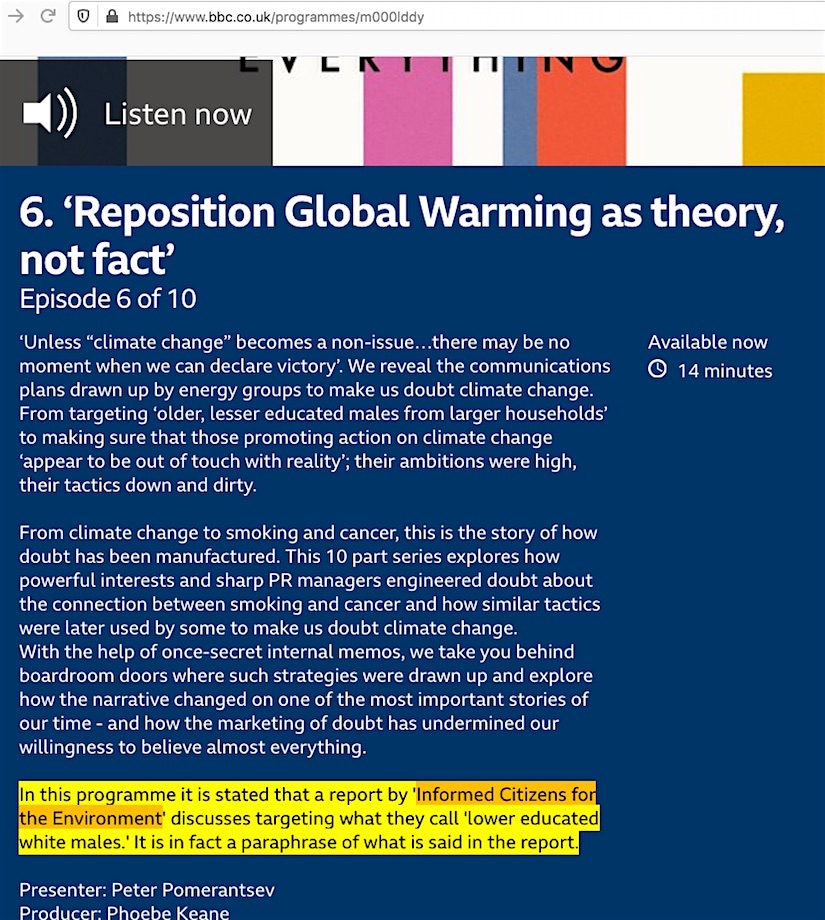 “… ‘lower educated white males.’ It is in fact a paraphrase of what is said in the report.”

Paraphrase? Would anyone in the entire United Kingdom describe the words “God Save the white Queen” as a paraphrase of “God Save the Queen”?

There’s more. In their attempt to offer a ‘correction,’ the BBC further digs a hole for themselves by attributing the “older, lesser educated males” phrase to “a report by ‘Informed Citizens for the Environment’.” That name was also part of the rejected proposal, a name which the the New York Times at least minimally described as unsolicited back in 1991. A name, I will further add, appearing one page prior in the memo set to the strategy that was unsolicited, rejected, and not even seen by the main person running the ICE campaign — Information Council for the Environment.

But there’s still more. In the BBC’s email reply to me, they basically danced around the part of my complaint where I noted that their podcast report implied Rush Limbaugh read a radio ad to his live audience of millions when in fact it was a pre-recorded ad played locally at only the Fargo, North Dakota radio station as part of the pilot project ICE campaign.

The programme did not state the ads were subsequently broadcast – only that they had been sent to the station with Limbaugh’s particular programme in mind: “…This advert you’re hearing was sent to the radio host Rush Limbaugh in 1991…we have the language that Rush Limbaugh read on the air“. So it points to the carefully targeted writing of the ad, and the station selection – but we did not state as fact that it was transmitted at a state level, or nationwide.

Screencapture of the complete BBC email text to me here. Where, in any part of the podcast report, is a radio station mentioned at all? And where in the radio world would the words “read on the air” mean the reading was not transmitted at a state level, or nationwide level, or even no farther than a city level?

For some unexplained reason, the BBC did not address any part of my complaint assertion that both the “reposition global warming” memo set and the “victory will be achieved” memo set were unsolicited by either group they were presented to and were never implemented, and are therefore worthless as evidence to prove sinister disinformation campaigns exist. Out of fairness to the BBC, it’s possible the reviewers of my complaint didn’t see my July 30th part 1 submission. Since I wasn’t familiar with how to file BBC complaints, I submitted it via their BBC Sounds contact page where it was assigned its one-and-only case number, and I submitted my July 31st part 2 to the more appropriate BBC Complaints page under that same case number.

Rest assured, I drew their attention to where my complaint’s part 1 was submitted when I replied to the above official response.

Imagine the fallout and potential domino effect if the BBC decided to objectively investigate whether any fossil fuel company ever conducted a sinister disinformation campaign operating under guidelines accepted and understood by all participants that Victory will be achieved when we reposition global warming as theory rather than fact.