Part 1 of this 2-part post was little more than my illustration of what I do when I’m not composing material for this blog, using a ‘guest post’ at Christopher Keating’s “Dialogs on Global Warming” blog. Today, I’ll illustrate how Keating’s subsequent diatribe against me is little more than a microcosm of the larger problem plaguing the political side of the anthropogenic global warming (AGW) issue. END_OF_DOCUMENT_TOKEN_TO_BE_REPLACED

From a July 15, 2013 Huffington Post article, Desmogblog’s Brendan DeMelle (yes, that Desmog) said in response to the news confirming the existence of a 97% scientific consensus on man-caused global warming: END_OF_DOCUMENT_TOKEN_TO_BE_REPLACED

At GelbspanFiles.com, my main focus is to amass a collection of information which shows myriad problems with the accusation that skeptic climate scientists are paid industry money to lie and spread misinformation, and myriad problems with the people surrounding that accusation, including one of the main promulgators of alleged ‘core evidence’ proving it, global alarmist book author Ross Gelbspan. Considering recent news about the Exxon corporation sending out document retention request letters against those who accuse it of hoodwinking its shareholders about the certainty of catastrophic man-caused global warming, there is perhaps some chance that my work may be used as a guide on ‘who’ needs to preserve ‘what’ in such efforts. But it is worthwhile to also see what possibly motivated the wider efforts behind the smear of skeptic scientists – I’ve done so once before, and now there’s a new and more troubling revelation coming from Gelbspan. END_OF_DOCUMENT_TOKEN_TO_BE_REPLACED

Think Ross Gelbspan is a long-forgotten figure from the past in the minds of enviro-activists? Think again. END_OF_DOCUMENT_TOKEN_TO_BE_REPLACED 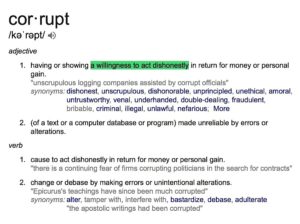 END_OF_DOCUMENT_TOKEN_TO_BE_REPLACED

Even though this series of blog posts concerns a prominent complaint filed in 2007 against the UK Channel Four Television Corporation video “The Great Global Warming Swindle,” my objective is to show how a thorough analysis of any given accusation about skeptic climate scientists being ‘paid industry money to lie’ shatters the accusation to bits no matter where the hammer strikes. Meaning, current efforts to use racketeering laws as a means to prosecute “climate change deniers.”

Today, an examination of a single-sentence claim within the complaint about fabricated names in the Oregon Petition Project (a claim widely repeated to this day, including a minor ‘supporting actor role’ in Naomi Oreskes’ documentary movie). The sentence should be devastating proof of how the petition is discredited …… END_OF_DOCUMENT_TOKEN_TO_BE_REPLACED

If there is one overriding trait among believers of catastrophic man-caused global warming, it is how their narratives to keep the issue alive depend on the public accepting everything surrounding their assertions without question. The science is settled, no need to listen to skeptic scientists because those scientists are corrupt industry shills. Problem is, when these narratives are examined in fine detail, they unravel. In this “Connolley Problem” series of posts, I’ve already pointed out suspect detail omissions (parts 1 and 2) and the suspect time span (part 3), of a supposed concerned citizen’s official complaint over a 2007 UK global warming video featuring skeptic climate scientists. Today, one more post about the suspect appearance surrounding this concerned citizen’s email to a person appearing in the video – and its tie-in to William Connolley. END_OF_DOCUMENT_TOKEN_TO_BE_REPLACED

For all practical purposes, the collective Greenpeace organization committed outright political suicide two weeks ago, essentially telegraphing to the entire world that they never had the evidence they claimed they had, proving skeptic climate scientists lie to the public under a pay-for-performance arrangement with fossil fuel industry people just like the way shill experts lied for the tobacco industry. Their December 8 ambush blunder of skeptic climate scientist Dr Will Happer at Ted Cruz’s Senate hearing is best illustrated with a famous movie courtroom scene question, but let me set the stage with the following points: END_OF_DOCUMENT_TOKEN_TO_BE_REPLACED

Former ABC News reporter, I should add. But I’ll get to that small problem later. First, in regard to Ross Gelbspan, it appears Blakemore has a backpedal situation that most people would agree a reporter should never be caught doing, then there is a problem with a particular line in Blakemore’s ABC News bio, and finally there is the larger problem of how the global warming issue seems to owe its life to the sheer lack of rigorous journalism about it. END_OF_DOCUMENT_TOKEN_TO_BE_REPLACED

People ask me that occasionally, since he is a fellow who has been largely unseen ever since he stopped blog posting at Desmogblog in 2010, the place he said he helped to create. Apparently, either he or somebody associated with him posts blog pieces at his The Heat is Online website which are little more than copies ’n pastes of entire articles from elsewhere. These also are placed at the Facebook outlet for his site. He is more active at his personal Facebook page when it comes to offering personal comments on news of the day, seemingly oblivious to how some of those comments draw attention to things he might find undesirable. END_OF_DOCUMENT_TOKEN_TO_BE_REPLACED