Enviro-activists across the board have every appearance in the world of being petrified of engaging in pure science data debate over whether it is established fact that human-induced carbon dioxide is the main driver of global warming. Who can forget the spectacle of Dr Gavin Schmidt refusing to debate face-to-face with Dr Roy Spencer, or Dr Katharine Hayhoe channeling Dr Schmidt while demanding an outrageous 49-to-1 ratio of debaters on each side? What possibly drives this fear? Ross Gelbspan encapsulated it best when he said the public would never take action to solve global warming if they perceived the need for that wasn’t proven. How do you convince the public there’s no need for debate? Label skeptic climate scientists as ‘shills who are paid to lie by the fossil fuel industry.’ Dr Hayhoe encapsulated this solution when she offered exactly that accusation in a Q & A session, while citing a pair of books by James Hoggan and Naomi Oreskes. Each, in turn, encapsulated the citation cascade problem, where every major accusation about ‘crooked skeptic climate scientists’ always funnels right back to Gelbspan.

As I detailed in my February 8, 2019 blog post, Naomi Oreskes and her close associates only amplified this faulty source problem in their weeks-old ‘friend of the court’ brief for the six current California global warming lawsuits, which themselves, are enslaved to Gelbspan’s worthless ‘leaked memos’ accusation evidence. The critical thing to never forget here is that these lawsuits offer no science debate, they state it as a forgone conclusion and demand judgment against evil Big Energy companies for colluding with ‘shill scientists’ to spread lies. The otherwise disinterested public would only be perplexed by a dismissal of the cases via hugely complicated and inconclusive arguments about science details.

If it was revealed that very prominent people knew all along that their science was no good and that the only way to win was to destroy their critics through character assassination, the public might become livid as to why this wasn’t revealed much earlier than now. That’s where Al Gore’s “Bill” problem becomes part of a larger concern worthy of deep investigation.

In my August 26, 2016 blog post, I suggested that if President Bill Clinton had pushed back against the strange fluff news items about his August 1997 Martha’s Vineyard vacation-time reading of Ross Gelbspan’s 1997 “The Heat is On” book, then it is plausible that the global warming issue would not even be a topic of international discussion right now. A national debate might have been initiated at a presidential level among top level climate scientists, and an investigation might have ensued to find out if Gelbspan’s claims about leaked industry memos were valid, and to find out why he was labeled as a Pulitzer winner when he never actually won it.

However, I now spot a potentially larger problem with all those fluff pieces mentioning President Clinton’s reading of Gelbspan’s book. A Washington Post collection of news items dated August 22, 1997 notes that this particular book reading happened the day before. The general impression is that Clinton was learning more about certain elements of the global warming issue for the first time from Gelbspan’s book, perhaps even becoming outraged to see Gelbspan’s insinuations that specific leaked memos showed how fossil fuel industry leaders sought out scientists who could be persuaded to engage in an industry-funded PR campaign to “reposition global warming as theory rather than fact.”

But on July 24, 1997, President Clinton said the following, after an introduction from Al Gore regarding a White House guest discussion with climate scientists that featured no skeptics:

As the Vice President said, the overwhelming balance of evidence and scientific opinion is that it is no longer a theory, but now a fact that global warming is for real. ….

Wouldn’t it have been more straightforward to say, “the overwhelming scientific opinion and observable evidence is that global warming is for real”?

Is it just a little too coincidental that the particular part of Clinton’s statement resembles words out of supposed ‘leaked memos’ which Gelbspan was just beginning to gain fame from for exposing?

Is it just a little too coincidental that, just a month later, fluff pieces describe Clinton reading Gelbspan’s book? Was it no surprise that Greenpeace didn’t miss the opportunity to pair of the phrases from both together in a November 1997 press package for the international news media? (at this page, click the “Industry and the Climate Debate” link to read the full text of the highlighted quotes below) 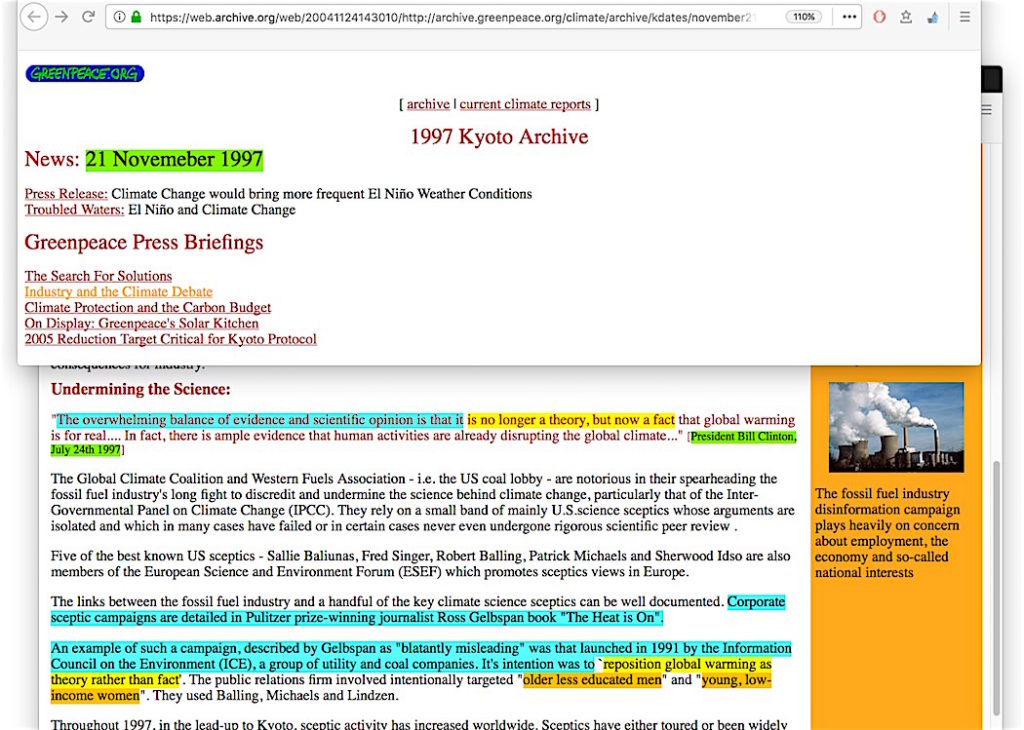 How coincidental is it that Greenpeace would exploit those similar phrases so soon? Ozone Action, the group that gave the (allegedly Western Fuels Association) “reposition global warming” / “older, less-educated males” / “younger, lower-income women” memos their first major traction, had not yet merged into Greenpeace. The answer there is possibly Kalee Kreider, who enjoyed quite a send-off from Ozone Action in 1996 before she went to work for Greenpeace. That Kalee Kreider, Al Gore’s future long-time spokesperson, the individual he later said was “of invaluable service in all of my climate work.”

Too many coincidences, too much of an appearance of this all being tied to gather:

If the accusation about Big Energy officials knowing their product was harmful while covering it up via disinformation campaigns is proven to be totally without merit, the obvious question is self-evident: where did these highly organized accusations originate?

I’m just a private citizen with perhaps a better-than-average ability to piece together myriad details, but I don’t have access to things like Vice Presidential Office visitor logs. Professionals with much more resources and access can dig deeper than me. They might ultimately be the ones to answer elemental questions: what did Al Gore know about the effort to destroy the credibility of skeptic climate scientists, when did he know it, and did he have any kind of covert role within it while he was Vice President?