Any association of anything remotely connected with the fossil fuel industry automatically invalidates any criticism a skeptic scientist might offer to the idea of man-caused global warming. So does it not follow that the same invalidation happens to scientists who promote man-caused global warming when anything remotely associated with the fossil fuel industry is seen in their vicinity? 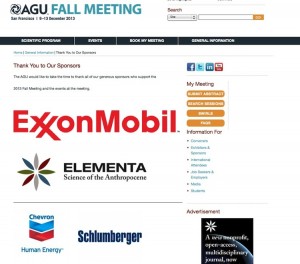 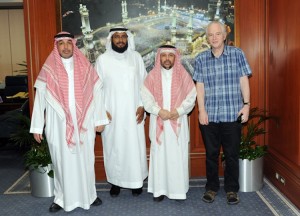 The American Geophysical Union (AGU) is cited as so-called ‘proof’ of many scientists expressing acceptance of man-caused global warming. So why is it we hear the sound of crickets from Greenpeace and other such organizations regarding the AGU’s funding? Right, Exxon and Chevron are now on the correct side (a.k.a. the Al Gore / IPCC side) of the issue, thus their money is simply going to help more people be better informed about the issue.

Then there’s Phil Jones, among officials at a Saudi university named after a king who made his country wealthy from oil revenue, which is also known to have some of its funding for science research coming from the chemical industry, and known for a controversy in which a massive infusion of Saudi government money was said to be creating an appearance of professors being attracted to it by very large salary offers.

The university’s Center of Excellence for Climate Change Research’s Strategies page assures us that they will “Offer scientific consultations for climate change mitigation“. And regarding the funding controversy, its vice president for graduate studies and scientific research assured us:

“Attracting highly-cited researchers from various international universities and research centres is … an arrangement that is legitimate and exists in many top-notch universities”.

Thank heavens. The Center no doubt gets a stamp of approval from Greenpeace. Nothing to see there, move along.

Money has no role in influencing the opinion or studies of university professors when they are on the right side of an issue, it only helps to tell the story of the issue. No hint of conflict-of-interest to be seen. Money does corrupt when someone is on the wrong side of the issue, and this collective notion was essentially encapsulated in IPCC Vice Chair Jean-Pascal van Ypersele’s position of condemning skeptic scientist Dr S. Fred Singer for an association with the fossil fuel industry, while saying his own association with Greenpeace was above reproach.

Ross Gelbspan insinuates skeptic scientists were on the wrong side of the issue from the start, but he has yet to provide a single bit of physical evidence proving skeptics received money as part of an arrangement to spread misinformation.

Now, if I relied on the above photos to say there’s a conspiracy to fund a misinformation campaign about the certainty of man-caused global warming, nobody would take me seriously. And if I also went out of my way over a long span of time to never even mention the viewpoints of skeptics, wouldn’t unavoidable questions arise about my bias?

Yet Gelbspan is taken seriously and I can name one mainstream media outlet that can’t explain why it has excluded skeptic scientists climate assessments from its program over the last 17 years.

What’s wrong with this picture?