For people having a solid appreciation of the sciences, and how all available facts need to be analyzed before coming to authoritative conclusions, the idea that catastrophic man-caused global warming needs to be marketed on the basis of emotion is illogical to the point of being abhorrent. But if this sales pitch sounds so ludicrous that it can’t actually be real, think again.

It is real, coming from the perhaps well-intended, but occasionally conspiracy-fixated, folks at Climate Crocks, in a January 4, 2018 post containing a Youtube video created by the Crocks site proprietor titled “How, and How Not, to Communicate on Climate Change.” The absurd statement is made at the 2:10 point:

The video is a primer on how to make the issue stick in the minds of the public, absolutely dripping with this mentality selling the global warming issue that way. Prior to making the above declaration, the speaker, PhD ecologist Sarah Myhre, sets it up with an emotional break in her voice by saying people “learn about things” from emotional stories told to them. Later at the 4:20 point, she gushes about the prospect of a parent not being able to share wintertime fun with their children.

You want to introduce people to the field of climate science, you gotta use this- you gotta say something like, yeah, this hurts, this is scary. You have to say, “hey, I want to ski with my kid in the future” …

Wait a minute. That’s the same sad, scary prospect voiced in a serious emotional way by late-night comedian David Letterman in 2009 when he had Obama administration “Science Czar” John Holdren on as a guest (full text here; let me know if a video has been preserved of this interview).

Then there’s the bleak prospect of a warm northern hemisphere climate melting all the ice in the Arctic, such that polar bears would have no more ice floes to rest on – they could drown from being too fatigued to swim any farther! It’s all so highly charged that you want to burst into tears. But the problem is, the vanishing ice floe photo is fake; the summer minimum Arctic ice extent has been above its lowest measured point since 2012; and it is really cold up there right around this time of year, whether you are on land, or out floating in the ice.

How’s that 2007 “very likely” IPCC prediction for “fewer cold outbreaks in winter” working out lately? Not well for Al Gore.

You’d think by now, the emotion they all feel about these situations not working out is acute embarrassment. 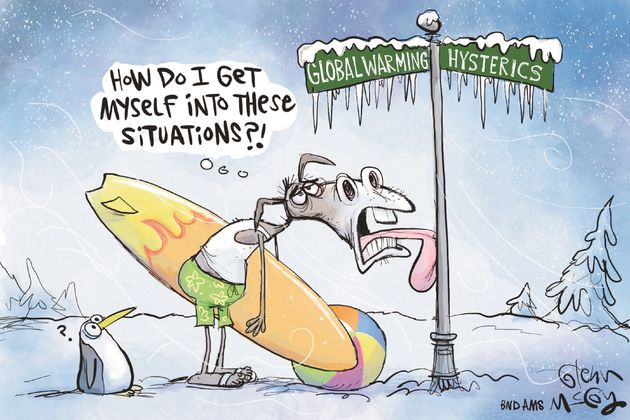 Except the mainstream media essentially does not tell Gore’s followers about these problems, nor is a science-based, calm, rational rebuttal permitted against IPCC / NASA / NOAA claims.

Those kinds of inconvenient truths could still bleed through to the uninformed public. How do you attempt to prevent this sort of information from taking root? You certainly don’t give skeptic climate scientists equal time to rebut your own scientists, because the resulting endless back-and-forth science debate would only elicit an emotional response from the public of pure apathy, or as Ross Gelbspan so succinctly put it, “Come back and tell us what you know when you really know what you’re talking about.”

Instead, you build a wall between that information and the public, built entirely out of a very powerful emotion: anger, toward ‘denier scientists’ who shill for fossil fuel companies in a massive, sinister disinformation campaign.

Go back in the 20 year+ history of the global warming narrative, and the ’emotions sells’ idea, with derision and anger toward critics, was there from the start. Case in point was one of Ross Gelbspan’s last 1992 articles at the Boston Globe. Within his terrifying, fear-laden vision of a planet in peril that our children might inherit, was the portrayal of skeptic scientists being in league with Ronald Reagan, contrarians out in left field who we all should be angry at.

But statements against skeptic climate scientists which look like ordinary political bias only appeals to a limited audience. What was needed was something for many more to be outraged about … as in contrarian scientists acting the same way the tobacco industry did when it refused to admit cigarette smoking was a problem. The tobacco industry was caught red-handed with a secret memo strategy saying “doubt was their product“; catch skeptic climate scientists in a similar conspiracy with Big Coal & Oil where the strategy is to “reposition global warming as theory rather than fact” and you’ll have the public so outraged that they will never trust a word those skeptics have to say.

No need to trust those skeptics’ facts, in other words, trust your gut. Trust your emotions.

And silence those bad guys.

Does anybody not see the fatal problem here? One of the more powerfully thought-provoking U.S. movies of all time explored the folly of emotion governing people’s actions instead of careful examination of cold, hard facts. When an entire issue has every appearance of looking like it’s steered by emotionally-driven figurative lynch mobs whose goal is to achieve ‘climate justice’ by any means possible, including negating facts from critics through character assassination, you have one very serious problem on your hands.

All of this could backfire in an emotional way, too. Imagine how joyful environmentalists would be if they discovered skeptic climate scientists were the good guys all this time, bringing good news about a planet that’s not actually in peril while warning about questionably-minded One Percenter enviro-activists apparently preying on a fearful public to enrich themselves. Nobody likes to be conned with outright misinformation. Imagine the fury of legions of sincere environmentalists, upon fully comprehending how much time, donations, and efforts were wasted fighting an issue that’s not actually a man-caused problem in need of fixing, when all of that could have been directed toward genuine environmental concerns and uplifting the poor.