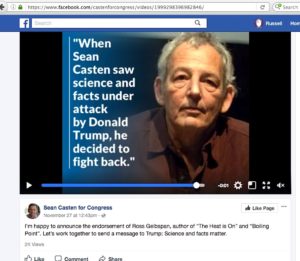 For those in my reading audience who are wondering whether Ross Gelbspan is still active lately outside of his own Facebook page, we have this from the Casten for Congress campaign’s Facebook page, 11/27/17:

I’m happy to announce the endorsement of Ross Gelbspan, author of “The Heat is On” and “Boiling Point”. Let’s work together to send a message to Trump: Science and facts matter.

It gets a step worse for the 2018 Illinois 6th Congressional District election’s Democrat primary candidate Sean Casten, at his campaign website. In his page currently titled “38 Environmental Leaders Endorse Sean Casten,” he has this blurb about Gelbspan:

Well, it is accurate that Gelbspan held those positions at the Boston Globe, and there is no doubt that he authored those two books. But it is also an irrefutable fact that both books don’t mince words about his ‘award.’ The inside dust jacket sleeve for “The Heat is On” and the dust cover for “Boiling Point” clearly call him a Pulitzer winner.

But when anyone drops his name into a search at the Pulitzer organization’s own website, it confirms that Gelbspan is neither a winner of the Pulitzer nor is he any kind of co-winner.

The first question is, how long will it take the Casten campaign to erase that label for Gelbspan? Assuming that happens, it will become a fact that matters as well, won’t it? But the next question is, considering how Gelbspan’s ‘evidence’ supposedly proving industry executives paid skeptic climate scientists to be part of an orchestrated disinformation effort is actually an accusation built on a foundation of sand, how long will it take for the Casten campaign to erase Gelbspan’s endorsement entirely?