Listen to or read a single version by itself of Ross Gelbspan’s various narratives about what led him to look into the ‘corruption’ of skeptic climate scientists, and it sounds quite compelling. Know some background information on what he’s talking about, and you wonder why he can’t keep his stories straight.

That’s how I opened my April 25, 2014 post regarding his repeated overall tale of a) minding his own business, b) being contacted / approached by health/climate change article series writer Dr Paul Epstein, which, c) prompted him to co-author an article with Epstein, that, d) resulted in a backlash of letter-writers which e) is what led Gelbspan to look into the works of skeptic climate scientists, who, f) he learned / discovered / was tipped that they were ‘industry-corrupted.’

I have the words highlighted in red above because (hat tip to Ron Arnold about this), we have a problem with that specific assertion from Gelbspan as well. Watch this:

Electric Vehicle World, An Interview with Ross Gelbspan (screencapture): He brought me a series of articles he had written which had appeared in the British medical journal, The Lancet. I was very taken by these articles, so I agreed to collaborate on a piece for the popular press.

The Heat is Online (screencapture): … there came to me Dr. Paul Epstein, of Harvard Medical School, with a series of articles he had published in the British medical journal, The Lancet. Since the work struck me as important, we collaborated on a piece for the Outlook section of The Washington Post.

Boston.com (screencapture): Epstein brought Gelbspan some of the articles he had written for a leading medical journal, the Lancet.  “I said, ‘This is important, people should know about this, too bad you can’t write.” … Soon the[y] were collaborating on an opinion piece on algae, disease, and climate change that ran in The Washington Post …

FreedomPress (screencapture): I was contacted by Dr. Paul Epstein of Harvard Medical School, and he wrote several articles in its medical journal on climate control and the spread of infectious diseases. I thought it was good material that should be shared with the public, so we collaborated on a piece for the Washington Post.

Those are Gelbspan’s own words, or words attributed straight to him. Notice in that last one, Gelbspan altered his narrative from the Lancet to Harvard. What can be found in words about the late Dr Epstein?

The Lancet (screencapture): …a set of Lancet articles on climate change and health that Epstein had coordinated.

Public Library of Science (screencapture): …In 1993, the editor of the widely read medical journal The Lancet asked Paul to organize a series of articles on the impact of climate change on health.

Then there is Gelbspan’s most recent narrative, as told to a Columbia Journalism Review reporter, who I caught incorrectly labeling Gelbspan as a Pulitzer winner:

Did Epstein himself ever provide clarifying details on what happened? Yes, he did. On page 64 of his own 2011 book*, he noted how he had “proposed an idea to an editor named David Sharp at The Lancet“, and the endnote for this page’s quote provides the details about it (click image to enlarge). 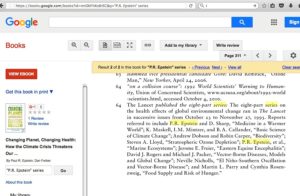 People could dismiss this as a bit of odd embellishment, if it was the only problem with Gelbspan’s narratives about his first look into supposedly corrupt skeptic climate scientists. It isn’t. It’s one more to throw on the pile concerning what I newly categorize at this blog as his “discovery odyssey.” It includes his bit about fake letter-writers, his inconsistencies about whether he prompted a male or female Attorney General to question skeptic scientists attending a 1995 government hearing, the plausibility problem of that AG tipping him – a private citizen at that time – about the impending appearance of skeptic climate scientists there – plus more than a dozen other major problems.

People could dismiss this as a glitch involving just one person among all those accusing skeptic climate scientists of industry corruption, if Gelbspan was the only person with such problems. He isn’t. Naomi Oreskes’ narrative of how she was tipped about ‘corrupt skeptics’ has a giant problem. Al Gore, with his claim that Gelbspan discovered core evidence proving the corruption of those skeptics, arguably faces the biggest problem of all, when it is seen that Gore not only possessed that so-called evidence long before Gelbspan ever mentioned it, but also when it is seen that the ‘evidence’ is not what he, Oreskes, and Gelbspan portray it to be.

The science of catastrophic man-caused global warming is settled, no need to pay attention to what skeptic climate scientists say about the science or its political angles, such as the “97% consensus” because they are paid illicit industry money to lie …. and certainly no need to question anything about that corruption accusation, either.