If there is one overriding trait among believers of catastrophic man-caused global warming, it is how their narratives to keep the issue alive depend on the public accepting everything surrounding their assertions without question. The science is settled, no need to listen to skeptic scientists because those scientists are corrupt industry shills. Problem is, when these narratives are examined in fine detail, they unravel. In this “Connolley Problem” series of posts, I’ve already pointed out suspect detail omissions (parts 1 and 2) and the suspect time span (part 3), of a supposed concerned citizen’s official complaint over a 2007 UK global warming video featuring skeptic climate scientists. Today, one more post about the suspect appearance surrounding this concerned citizen’s email to a person appearing in the video – and its tie-in to William Connolley.

To recap: days before the 2007 UK Channel Four Television Corporation video “The Great Global Warming Swindle” was broadcast, ‘concerned citizen’ Dave Rado inquired at William Connolley’s blog regarding where to file a complaint about the video. The “Wunsch” in my blog title is MIT’s Dr Carl Wunsch, who was mentioned in detail under the “Don’t Quote Me” page 165 section of Chris Horner’s 2008 “Red Hot Lies” book.

In particular, Horner describes on page 168 how Dr Wunsch quickly reacted in protest to the video, how the UK Guardian reported his arguments, and how Dr S Fred Singer, another scientist seen in the video, said Dr Wunsch’s claim of being taken out of context was baseless. Readers wishing to see full context of the bits for Horner’s Wunsch story can see them at Dr Wunsch’s own “11 March 2007” response, the Guardian “Climate scientist ‘duped to deny global warming’” article, and Dr Singer’s opinion of Dr Wunsch, at the “Climate Swindle film bruised egos” section here.

I leave it to others to determine if Dr Wunsch’s statements within “The Great Global Warming Swindle” at the 25:25 point, at 49:20, 50:46, and 57:00 are out-of-context to the point of being misleading, since such science assessments are beyond my expertise to examine. His claims within his “11 March 2007” response about “being asked to appear in a film that would discuss in a balanced way the complicated elements of understanding of climate change” versus what video’s Assistant Producer Jo Locke said have already been discussed at length by blogger Steve McIntyre here.

For me, though, the red-highlighted part of the above Guardian‘s headline is one more layer in the Rado / Connolley problem. At the time of writing his November 11, 2008-published “Red Hot Lies” book, Horner spoke of that headline as follows in his page 369 notes, “It is not clear who the Guardian claims to be quoting in this headline as this quote does not come from Wunsch or apparently from anyone cited in the story.” True, the article clearly said, “A leading US climate scientist is considering legal action after he says he was duped into appearing in a Channel 4 documentary that claimed man-made global warming is a myth.” In his own lengthy response dated , Dr Wunsch only says he was duped within his “10 March 2007”-dated letter to the Head of Production for the video – arguably in the way the Guardian article described, as opposed to what the headline states. Dr Singer simply pointed out that Dr Wunsch “didn’t like the general tenor of the program.”

But this mention of being “duped” does not originate in his protest letter just two days after the broadcast of “The Great Global Warming Swindle” – which, I should add, was placed at comment #109 at the RealClimate blog by William Connolley (archived here for posterity). Scroll up the page from comment #109 to the original body text of the blog, and you see the blog post is dated 9 March 2007, authored by William [Connolley] and Gavin [Schmidt], and says, “Carl Wunsch … was apparently misled into thinking this was going to be a balanced look at the issues.” “Misled” being a synonym for “duped.”

The embedded web link for the words “apparently misled” doesn’t function, but placing it ( http://scienceblogs.com/stoat/2007/03/the_great_global_warming_swind.php#comment-367476 ) at the Internet Archive site allows it to be seen as William Connolley’s original March 4, 2007 Stoat blog about the video, where Dave Rado speaks of receiving an email from Dr Wunsch, who says he was duped. In that last screencapture, I’ve highlighted the date/time of Dr Wunsch’s reply to Rado, and the date/time when Rado posted his news at Connolley’s Stoat blog, to emphasize what I said in my prior post about Stoat being part of an Australian blog site system, thus the blog has dates that are one day ahead of everyone else. I believe this explains why Dr Wunsch’s March 9th 2:31pm reply seemingly takes place hours after Rado placed his March 9th 10:02am post about that reply.

The RealClimate blog is U.S.-based, and again, the news of Dr Wunsch saying he was misled is seen one day after the video broadcast just four sentences into Connolley’s RealClimate post. But the news of this is seemingly broken by Dave Rado at Connolley’s Stoat blog. Timestamps for both blogs present a problem, but the larger problem really is how and where Connolley learned of the news that quickly after the video broadcast.

My other big concern is about the way Dave Rado contacted Dr Wunsch on this matter.

Rado’s Ofcom Complaint web site version of this correspondence is screencaptured below from the PDF download version, for ease of highlighting the relevant parts (click the image to enlarge). It doesn’t show the timestamp generated by Rado’s computer for his initial inquiry to Dr Wunsch, but his copy ‘n paste of the email exchange a day later at William Connolley’s blog does show it:  “Sent: Friday, March 09, 2007 4:05 AM” 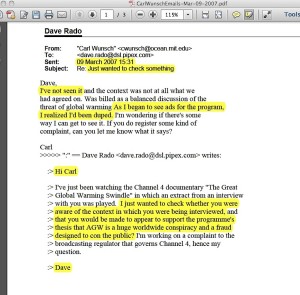 Several appearance problems jump out at me:

• Rado would have watched “The Great Global Warming Swindle” at 9pm, Thursday March 8th for an hour and 16 minutes. Just under six hours later, Rado sent Dr Wunsch what I assume was the first-ever email correspondence with him. But outside of two comments Rado placed at Connolley’s Stoat blog in 2005 (which I noted in part 2 of this series), Rado had no prominent internet presence prior to the video’s broadcast that I can readily find where he expresses any concern over the global warming issue.

A view into his still-current web site (which displays no obvious material about global warming) reveals an unseen page for his saved copy of a letter he wrote to Greenpeace in February 2007 about LPG-fueled cars’ carbon footprint. Dating from that same time in early 2007, he is on record complaining to the UK Daily Mail about unfair treatment of the Toyota Prius in its “Toyota Hybrid Battery Factory Turns Landscape to Poisoned Wasteland” article, which resulted the deletion of the article, replaced with a letter from Rado which noted praise about environmental activities. Rado’s position is strangely at odds with his 2008 claim that he was not an environmentalist (full text here). Notice immediately after his denial of being an enviro-activist in that screencapture, he states that he has never heard of two prominent IPCC scientists, an apparent indication of ignorance over the global warming issue even one year after lodging his Ofcom complaint, considering his Ofcom complaint referring directly to a Phil Jones / Michael Mann paper five times.

• Rado’s initial email to Dr Wunsch has a subject line of “Just wanted to check something”, the kind of line prompting most people to delete such email from strangers without opening them because they look like spam email.

• Rado’s initial email addresses Dr Wunsch as “Hi, Carl” and signs off as “Dave”. Dave who?

• Rado’s initial email launched straight into the assumption that Dr Wunsch “would be made to appear to support the programme’s thesis that AGW is a huge worldwide conspiracy and a fraud” with no explanation of what led to that assumption, then states he’s working on a complaint. Complaint over what?

• Assuming a near-immediate delivery of the email to Dr Wunsch’s inbox, it would have arrived at just after 11pm March 8th, Cambridge, Massachusetts local time. It might be safe to guess that Dr Wunsch would not have seen the email until his office arrival time the next morning, and that he responded to Rado around 5 hours later.

One could put a humorous angle on the first bullet point item and say if it was presented in a television courtroom drama scene, it would be met with an “Objection!” from Rado’s defense attorney, to which the prosecutor would reply, “Goes to credibility.” But it is those last four items which bother me the most.

I consider myself to be nothing more than a concerned citizen. As I said in the guest commentary I had about Dr Willie Soon, my email address book reads like a “Who’s Who” list of skeptic scientists and speakers, something which didn’t happen overnight. In my very first email exchange with Dr S. Fred Singer in 2005, I addressed him as “Dr Singer”, I used a subject line that wouldn’t be mistaken as spam, and I fully described the situation prompting my email, not only with web links but also with full context copies of the political office correspondence I was describing. In late 2008, I began a much wider email correspondence effort with skeptic scientists, prominent skeptic speakers, and media reporters/personalities, by referring to the first of my online articles about the global warming topic. Although I gained increasing amounts of “Who’s Who” email addresses, there are several prominent skeptic people who have never answered my email inquiries, and among those I’ve had the privilege to correspond with, they usually answer at least a day later on the various occasions when they choose to reply. This is understandable, they are probably busy with other more important things.

No accusations are implied here, but reasonable questions can be asked:  Just how plausible is it that a person with essentially no “street cred” on the global warming issue could get a response from a climate scientist in a matter of hours over an email having a suspect subject line and arguably presumptuous greeting / sign-off / main text body wording? And how plausible is it that a major newspaper would run a dubious “I’ve been duped” headline story which ultimately sourced from that type of email only two days later?

Just askin’. But those questions, combined with others about the “Connolley problems” I’ve mentioned so far and more which I’ll detail in at least three upcoming posts, could be something investigators and reporters could pose for me.
————————————————————————
Up next: “The Connolley Problem, pt 5: The Redundant Gelbspan/Lancaster Reference“