Over the weekend, the PBS NewsHour had a news discussion segment about how an Oregon-based environmental group, Our Children’s Trust, and its creator Julia Olson are using teenage students to ‘stop climate change’. Can you guess where the path leads?

My primary focus is on the way the ‘skeptic climate scientists are paid industry shills’ accusation falls apart, but my secondary bit of data-collecting is on the sheer bias of the PBS NewsHour on global warming. At my personal list of instances where global warming is mentioned on that program in a significant way, this discussion is #466 among those found in the NewsHour’s online transcripts going back to 1996, and among all of those, there have been only five instances where NewsHour viewers got any good idea that detailed skeptic climate assessment science points exist. This segment certainly offered none.

Neither does the Our Children’s Trust web site, having no mention of skeptic climate assessment reports. So, after firing off an email to that organization that was a variant of seven rough questions I send to such places, I undertook an exercise I regularly do with such sites – I plopped Gelbspan’s name in a site-specific search of it.

That turned up just one result, Mary Christina Wood’s chapter 6 “Atmospheric Trust Litigation Across the World” contribution to a 2012 book titled “Fiduciary Duty and the Atmospheric Trust”. As Julia Olson mentioned in the NewsHour segment, Ms Wood was a primary inspiration for the creation of Our Children’s Trust.

JULIA OLSON: And so, I heard a talk that Mary Wood gave at the University of Oregon about using the Public Trust Doctrine to compel governments to protect our climate system for future generations…

MEGAN THOMPSON: Environmental attorney Julia Olson was so inspired that she decided to put Wood’s ideas into practice.  In 2010, she co-founded Our Children’s Trust…

A few paragraphs before that, Ms Wood offered some faulty ‘if-then’ reasoning about what prompted her global warming concerns that was about as logical as what I described in my blog post here on another prominent global warming believer’s foray into the issue.

MARY CHRISTINA WOOD: It was really the moment when Hurricane Katrina hit and I recognized that climate crisis had not been addressed properly by government and the crisis was worsening with great urgency.

And environmental law had largely failed to address many of the most significant problems we face. So, to me, the Public Trust Doctrine was the logical response.

Meanwhile, the Our Children’s Trust copy of Wood’s book chapter reveals its core dependency problem on page 101, in a pair of sentences with its corresponding footnote:

Yet, despite this planetary crisis, there has been little action at either the international or national level. This may well be due to the fossil fuel industry’s influence over political leaders, economies, and governmental systems worldwide.18

…which Ms Wood noted in her references section as Gelbspan’s 2004 “Boiling Point” book, page 61 being the concluding page to his “Criminals Against Humanity” chapter 3, where on page 51 he repeated his infamous insinuation about the “reposition global warming as theory rather than fact” phrase as proof that industry steers skeptic climate scientists’ words. 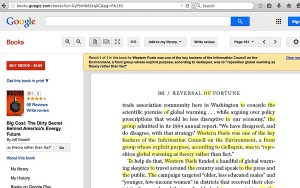 In Ms Wood’s 2013 “Nature’s Trust” book, she cites Gelbspan at least 12 times, incorrectly labeling him a Pulitzer winner on one page.

No matter where you go in the global warming issue, there is Gelbspan when anyone brings up the idea that skeptic climate scientists are industry shills. How many times does this pattern have to repeat before real journalists see how his literally unsupportable accusation is a primary driver for ill-informed people to use as an excuse to ignore skeptic climate assessment reports?