In Al Gore’s NY Times review of Gelbspan’s 2004 “Boiling Point” book, he said “Gelbspan’s first book, ‘The Heat Is On’ (1997), remains the best, and virtually only, study of how the coal and oil industry has provided financing to a small group of contrarian scientists“. The executive director of Greenpeace said in 2009 that Gelbspan was a ‘lone voice‘ who uncovered the corrupt influences of the fossil fuel industry. But in a 1996 midyear summary of their accomplishments, Greenpeace International claimed this particular accolade for themselves….. without a solitary mention of Gelbspan.

Via a 1996 “COP-2 Summary” of the United Nations’ Second Conference of the Parties (COP-2) from Greenpeace International about reports they presented in Geneva Switzerland in July 19, 1996, we see this gem about one specific Greenpeace report (bold emphasis mine, full text here):

In the report ‘The Scourge of the Skeptics – Industry Attacks on the IPCC Second Assessment Report’, Greenpeace exposed the political agenda of the global fossil fuel lobby and its financial sponsorship of scientific skeptics of climate change.

The “Scourge Of The Sceptics” ten page report can be read in its entirety buried deep within this Greenpeace scan archive, starting on page 35. Greenpeace International runs headlong into its own narrative derailment in the section titled “High Powered Engine of Disinformation” (click to enlarge) 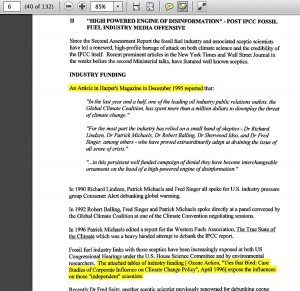 The last highlighted bit tells who really ‘exposed’ crooked skeptics, a report from the Ozone Action group just a few months earlier. Lest anyone forget, what Ozone Action’s revelation centered on were Western Fuels Association leaked memos found by them and Ross Gelbspan. As for the Harper’s Magazine quote, Greenpeace does not bother to say it was written by Ross Gelbspan. Never mind that neither of the two ever proved a money-for-fabricated-assessments quid pro quo arrangement between any form of the fossil fuel industry and skeptic climate scientists.

The contact person listed at the end of the Scourge Report is Greenpeace International’s Climate Policy Director Bill Hare. He has an entertaining connection to my Feb 14, 2014 blog post. In that piece, I detailed how the Sierra Club is bizarrely not credited for being the first to uncover the ‘corrupt influences of the fossil fuel industry’, and I used a link to a 1996 email alert received by the Sierra Club’s Global Warming Program Director Dan Becker to suggest Becker apparently felt no jealously about Ozone Action getting that praise instead. See whose name appears right above Becker’s? 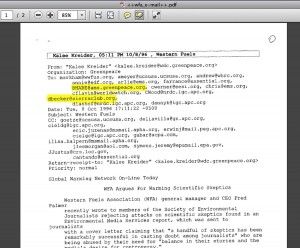 Let’s finish out with this huge irony:  Hare’s bio says he was an IPCC lead author with other influences at the IPCC while still working at Greenpeace. But Greenpeace and so many others would have the pubic believe the slightest association of skeptic climate scientists with fossil fuel companies renders such skeptics as completely corrupted.